Telangana gets 31 districts to spruce up adminstration

Hyderabad: After achieving Telangana state, the TRS government will cross another milestone on Tuesday, on the occasion of Dasara, when it carves out 21 new districts from the existing 10, taking the total to 31.

The 21 new districts will start functioning from Tuesday itself with the opening of the district collectorates, offices of the superintendents of police and other government offices.

The new districts was one of TRS’ 2014 electoral promises and Chief Minister K. Chandrasekhar Rao will formally inaugurate Siddipet district in Siddipet town at Ambedkar Bhavan at 11.13 am (Dhanur Lagnam) on Tuesday.

Though the TRS had promised 24 districts in all including 14 new ones in its election manifesto, the demand from all sections forced the government to have 31 districts.

Municipal Administration and IT minister K.T. Rama Rao will inaugurate Sircilla district at the same muhurtham as will other ministers, Speaker S. Madhusudhana Chary, and Council chairman Swami Goud in the districts allotted to them. 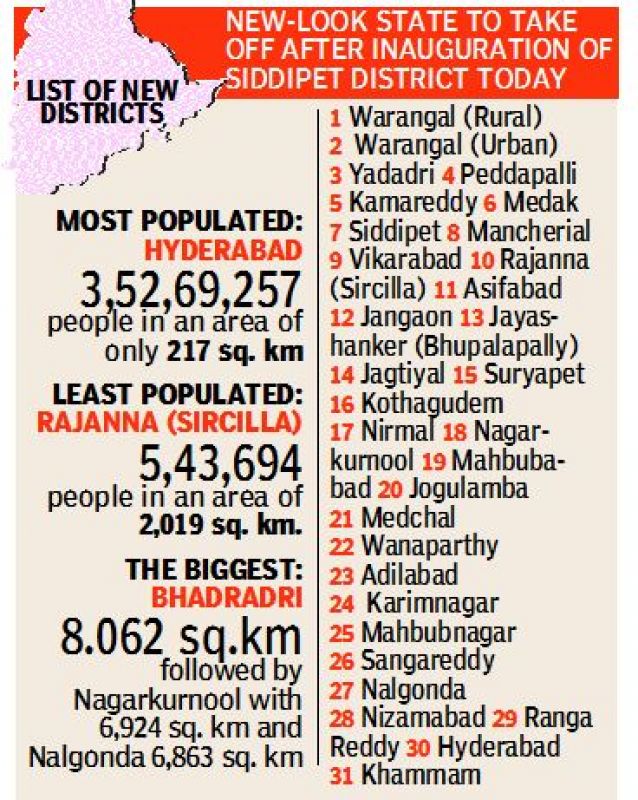 The muhurtham has been fixed between 11.13 am and 12.30 pm, it is learnt.  All the newly-carved-out districts, district collectorates, superintendent of police offices besides mandal-level revenue, police and other offices have been decorated for the memorable occasion. New districts are being carved out after 38 years, the last being Ranga Reddy in 1978.

For the CM’s visit, Siddipet town has been decorated for the occasion with cutouts of Mr Rao and posters. Irrigation minister T. Harish Rao, who represents Siddipet Assembly, is personally supervising the arrangements.

“There will be 31 districts and the muhurtham has been fixed at 11.13 am for inauguration of the Siddipet district by the CM,” said CMO sources.

“About 6,000 women will welcome Mr Rao with arathi, 1,000 artistes will stage a performance, 30,000 laddus will be distributed and 50,000 balloons  released on the occasion in Siddipet. The CM will be taken in a procession and he will address a public meeting,” a TRS leader disclosed. The state government has also appointed collectors to all the 21 new districts.

Each oppressed Pak refugee will get Indian citizenship: Amit Shah