Chennai: At a time when the country is boiling with repeated incidents of mass lynchings over “choice of meat”, writer Suchitra S. Rao gets into a tête-a-tête with DC, revealing how real life incidents prompted her to write a book on a ‘not-so-much-in-public-discourse’ issue, cattle trafficking. The author, who herself has been part of at least 7-8 cattle rescue operations, and has later gone on several illegal slaughter houses raids, says the book aims at sensitizing public to cattle trafficking.

As for the book inspired from real-life incidents, the author, the co-founder of PFCI (People for cattle in India) reiterates that, “the book is 30 per cent reality and 70 per cent creativity.” While the actual writing started in 2016, the expeditions started way back in 2012. 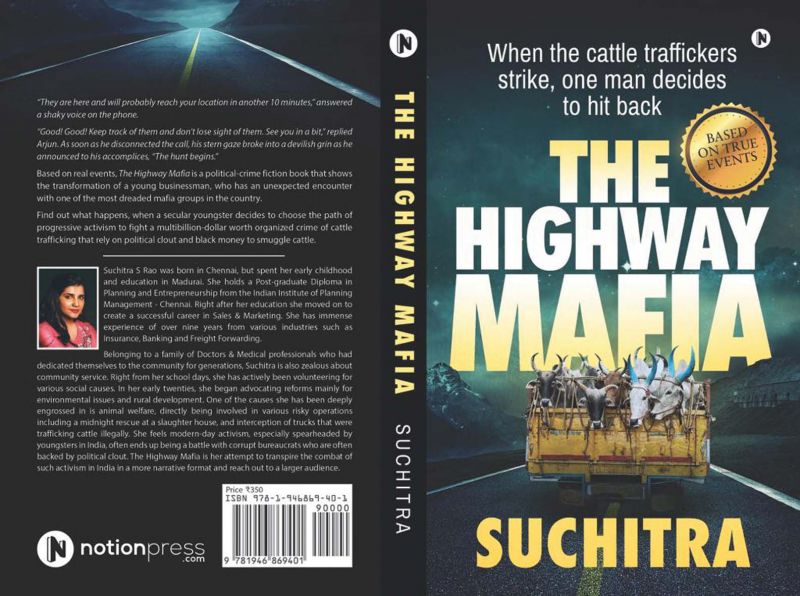 “Both Arun and I are apolitical persons. We were simply used for a well-known organization with a clear agenda and we were not aware of it all during the time of shooting. They gave the documentary a very communal angle. Had we known it before, we would have never been part of it.”

Talking about expeditions, she recollects how she and Arun Prasanna, the founder of PFCI, (Arjun Krishnan in the book) would go on midnight cattle rescue operations. “Arjun was the one who spearheaded the operations. We wanted to go to the bottom of the issue, for which we had to study the routes.”

As exactly described in the book, cattle trafficked from various shandy markets in Uttar Pradesh, Madhya Pradesh, Punjab, Maharashtra are brought to Orissa and from there taken to cattle mafia based at Srikakulam in Adhra Pradesh. There the cattle are loaded onto trucks for their two-day journey to Palakkad, a gateway to slaughterhouses in Kerala, from where the meat is exported to the Middle East and Gulf.  A control room in Kavaraipettai is there to coordinate with drivers, toll workers and the masterminds to facilitate a smooth execution. Approximately 9,000 cattle are transported through the highways every week, Saturday nights alone witness some 50 trucks with 45-50 cattle loaded in one truck alone.

Born in Chennai, raised in Madurai, Suchitra now works as a senior business development manager in a shipping and logistics firm. She has been volunteering since she was five years old.

“My mother, a doctor is into human welfare, dad is a veterinary doctor. So I am a balance of both.” The book brings to light an ‘under cover’ crime like cattle trafficking and illegal slaughtering at a time when beef consumption still remains a bone of contention.

“This book is not for or against any political ideology. It talks about cattle trafficking as a macroeconomic issue. If you go through RTIs, crores of money is pumped into this trade and the fact remains that beef export is the main reason for cattle trafficking and what is more concerning is, because of cattle trafficking, our cattle resources are depleting. People have asked me why I wrote the character of Afreen- a girl from another community actively taking part in the rescue operations.  My response was anyone can stop a crime, irrespective of religion.”

“If a poor kid is getting nourished from beef in a poverty-stricken country like India, I am okay with it. But I’m totally against the cattle export business which runs into multi-billion dollars.”

“Six months ago I saw a cartoon saying ‘cows are safer than women in India’. I was hurt because this is not the case. Only 20 per cent of the torture on cattle is reported as cattle are not privileged like us to open up. They are also subjected to a lot of cruelty but most of them go unreported,” adds Suchitra, shuddering at the memory of one such expedition where she saw a man (probably the truck driver or his assistance) rubbing red chilies into the eyes of a cow so it would not sleep.

Suchitra chose to stay low-key till the book was released, despite being a part of all the major operations. “Main reason police took up cases was the media. Otherwise, they would start getting call from the media, especially print media. They do not want to be in the newspapers for any wrong reason,” Suchitra said.