A waterlogged road at Anugraha Layout, Bilekahalli, due to heavy rainfall in the city, in Bengaluru on Sunday. (Photo: Shahsidhar b. & R. Samuel)

Bengaluru: While rains continue to pound the city, the Saturday's downpour left a trail of destruction in many places and Anugraha Layout and Annapoorneshwari Layout in Kodichikkanahalli were one of the worst affected.Torrential rain late Saturday shook the residents out of their sleep and they had to hurriedly take measures to prevent rain water from flooding their homes.

Though the distressed residents made numerous calls to the BBMP and Fire Force department, they did not get any timely help. As a result, many houses got flooded and sump water got contaminated, lament residents.

Sethu Madhava, a resident of Anugraha Layout, said that the root cause for the flooding is unscientific design of drains and incomplete network. 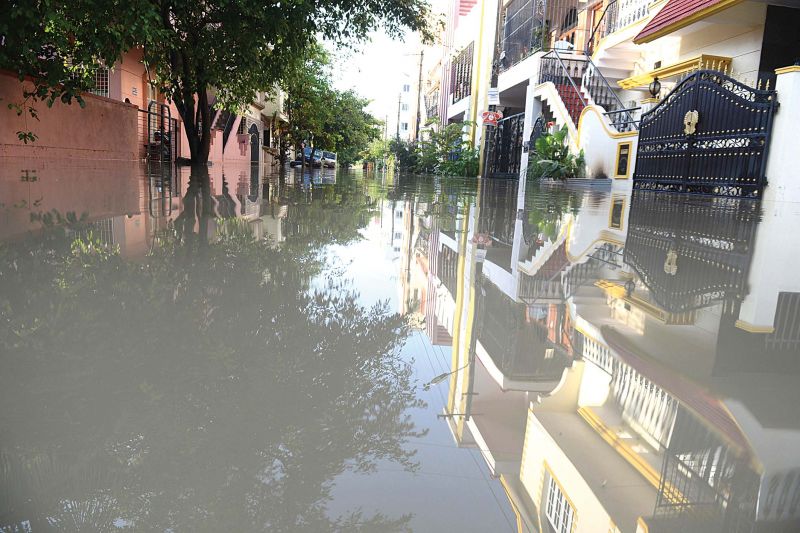 Another flooded locality on Bannerghatta Road

In addition, the BWSSB have not bothered to clear the legal issues in taking over the land to provide connectivity. Since underground drainage work, stretching about 50 to 60 metres, was pending due to legal hurdles, the water has been diverted to the storm water drain. Naturally, the water has been flooding the area and causing panic among residents, Madhava lamented.

The BBMP prahari staff came at 2.30 am with a small pump, which was woefully inadequate, making a mockery of themselves, while panic stricken residents tried to pump out water themselves.

The fire force personnel came only at 5.30 am by then the damage had already done. They could pump out the water and not help the public from saving their valuables, he said.

The residents want the BBMP to sanitise the entire area in the next two days by flushing out the stagnating water from the drains, to avert the area from falling prey to the epidemics.

A request has been sent out to the BBMP authorities in this regard, Madhava added and said it is high time that the BBMP gets its plan right rather than squandering public money in fancy and cosmetic infrastructure projects. Some of the lakes in the city including Kengeri and Alahalli have started overflowing, while Vrishabhavathi valley, which carries storm water, too has started flooding on to the road at many places.