Thiruvananthapuram: With Kerala facing an unprecedented rain havoc, the death toll on Saturday evening climbed to 37.

The National Disaster Management Authority (NDMA) said heavy to very heavy rains are expected in 16 states, including Kerala, in the next two days. Fishermen are advised not to venture in central Arabian sea, the NDMA said on Saturday.

A red alert has been issued for 8 districts -- Idukki, Wayanad, Malappuram, Kozhikode, Palakkad, Kottayam, Alappuzha of the 14 districts in the state by the Indian Meteorological Department.

Over 15,600 people have been evacuated from the affected areas and around 500 relief camps have been set up.

As many as 14 teams of NDRF consisting of 404 rescuers and 31 boats were already deployed in various parts of flood-hit districts --  Thrissur, Ernakulam, Alappuzha, Wayand, Kozhikode and Idukki to assist the state administration in the relief and rescue operation as well as distribution of essential relief material and to provide medical support to affected people at the time of emergency.

Chief Minister Pinarayi Vijayan announced an ex-gratia of Rs 4 lakh to the next of the kin of the deceased and Rs 10 lakh compensation to those who lost their houses and land. 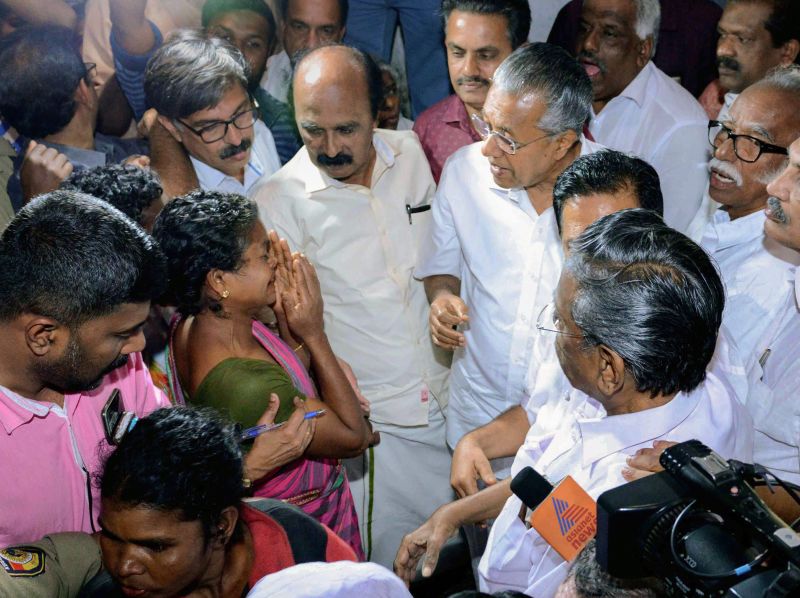 He also made a personal contribution of Rs 1 lakh to the Chief Minister's Distress Relief Fund (CMDRF).

Urging everyone to contribute generously to relief efforts, Vijayan said in a Facebook post that rebuilding the affected areas is going to be an arduous task.

Congress President Rahul Gandhi on Saturday wrote a letter to Prime Minister Narendra Modi apprising him of the situation and urging the latter to release sufficient funds immediately to the Kerala government for their relief and rehabilitation efforts.

CM Pinarayi Vijayan on Saturday took an aerial survey of flood-ravaged districts of the state which have been pounded by heavy rains since the past few days.

Union Home Minister Rajnath Singh will undertake an aerial survey of flood-hit Kerala on Sunday to take stock of the situation in the southern state.

Singh, accompanied by Tourism Minister K J Alphons and senior officers from the Ministry of Home Affairs, will visit the floods and landslides affected areas, a Home Ministry statement said.

10 day lockdown in Telangana from tomorrow

WHO classifies B1617 COVID variant, first identified in India, as variant of concern