Thiruvananthapuram: Due to the ever-increasing inflow of four-wheelers into Medical College Hospital (MCH), the previously usable remote spaces on its campus also have got saturated.  The paid parking facilities, staff parking and even no-parking zones get saturated during morning OP hours. The public parking remains tight until principal’s office, MLT wing and even in space in the gorge behind Child Development Centre.  Adding to woes were poor condition of roads or lack of them in many locations on the campus.

While traffic police estimates that only around 3,500 four wheelers were inside the campus, the medical college officials have no statistics. “When established in 1951, the present vehicle density couldn’t have been predicted. So, the clogging is obvious, and we hope to get over it once multi-level parking, proposed in master plan becomes a reality,” said deputy superintendent Dr Joby John. A multi-level parking complex was under consideration on the corporation land in front of the multispecialty block. Another one was planned in front of the casualty. 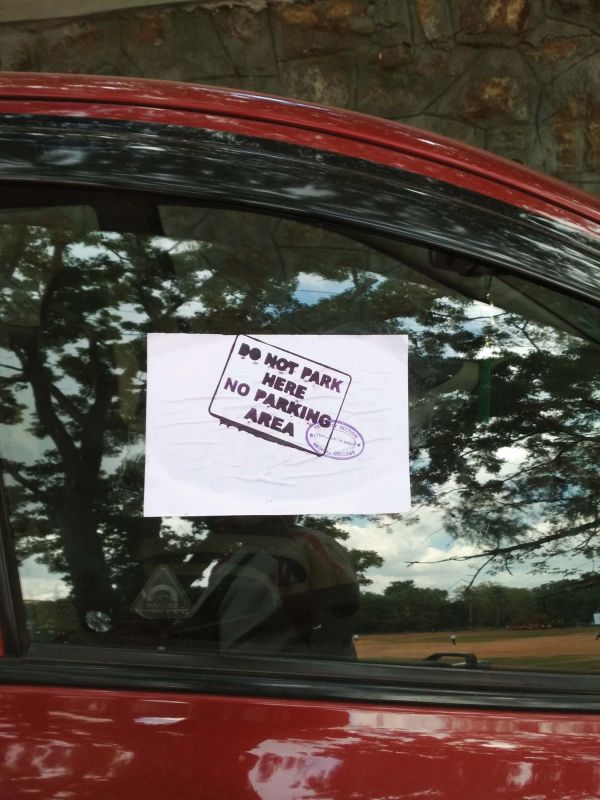 A sticker pasted on a car parked on the no-parking zone enroute Priyadarshini Institute of Paramedical Sciences.

However, as the plan was still in a nascent stage, the MCH officials did not comment on it.   “I am going to the new building beside cricket ground (new SAT block). It would be nearly a kilometre from here. Still, it’s worth a try,” said Senthil Kumar, a driver from Tenkasi, while warning another driver about the shortage of parking space in front of the super speciality block. The medical college OP wing alone attract around 3,700 patients and their companion.  Apart from this are bystanders and patients of thousands seeking treatment at Regional Cancer Centre (RCC), SAT hospital for women and children, and Sree Chitra Tirunal Institute of Medical Sciences and Technology (SCTIMST) within the campus.

“It is challenging to shift an age-old campus into an automobile-oriented one,” says K.B. Jayakrishnan, an Urban planner. “Vertical structures to house vehicles are important for Medical College to solve their parking issues. However, to achieve, this first they need to have an accurate estimation of vehicles coming into campus. Also, the growth of vehicles and new structures should be projected. The facilities should be made on war-footing to cater to the needs for next 30 years or so.”

New buildings continue to come up across the Medical College campus with no sufficient underground or terrace parking. The MCH is an extension of building in the city where only residual space is allotted for parking.  Unlike the commercial spaces, the cars in hospitals stay for long periods, sometimes until patients are discharged. “There is often an uncertainty linked to hospital visits. You may not be sure what you will have to do next after you reach there. Sometimes you will have to rush to workplace soon after the hospital visit. So private vehicles will always be preferred by those who own them,” adds Jayakrishnan.