The truth will set you free

Professor Joseph Varghese holds a placard demanding the introduction of Church Act in the wake of the land deal controversy involving Ernakulam-Angamaly Archdiocese of Syro Malabar Church in Kochi. — FILE

The money that the faithful contribute to shrines, being carried away by piety, will end up, wrote T. S. Eliot in Murder in the Cathedral (1936), in the lap of prostitutes. He puts these words in the mouth of the 'tempter' who tries to dissuade Thomas Beckett, the zealous Archbishop of Canterbury, from embracing martyrdom. Beckett, unlike his counterparts today, takes the thorny path and pays for it with his life. No one needs to be persuaded that the shady land deal, of which Major Archbishop Mar George Alencherry is now being accused of, is a rare or stray aberration. It is the proverbial tip of the iceberg vis-a-vis the Indian Christian community. Scandals that have come to light in the recent years, and skeletons that continue to tumble out of ecclesiastical cupboards, are far too numerous and nerve-wracking for us to look the other way.

Ironically, land is the foremost theatre of the spiritual nakedness of the church. I can vouch that this is a pan-Indian Christian blind spot. 'Ironic', because land was basic to the revolution that Jesus brought about. He realized that Judaism got wrecked, and its light turned into the darkness of ethnic pride, because the Jews made land the basis of religious identity. Even today, belonging to the Jewish homeland is of extreme importance for a Jew. Jesus saw through the spiritual danger in this. He delinked religion from land. The Kingdom of God -as against the Jewish Promised Land- has no territorial, cultural or ethnic boundary. We are pilgrims on this earth. We are on the earth, but of it. We may 'own' land, but we and all that we have belong to God. We will, hence, hold land in an attitude of fearful and faithful trusteeship to God. Many put on the garb of Christianity; but they are infiltrators who see religion only as a jungle where they are on a merry hunting expedition. Or, religion is a sort of book-keeping; a mere reckoning of profit and loss: profit for oneself, and loss for the people.

As of now, land is not the principal issue. The malaise in which the Indian Christian community languishes stems from utter alienation from its spiritual well-springs. So, two things happen. First, corruption becomes rampant. Second, the community loses the spiritual discernment to recognize corruption for what it is. They think that corruption practised by 'holy men' is holy. They forget, in the process, that Jesus insisted on the contrary: be unsparing and fiercely 'intolerant' towards the 'false prophets' in your midst. Never mind, if there is corruption in the world out there; but take a whip with you, and use it like mad, if there is muck in your midst. That's what he did; and it was for this that he was crucified. The tragedy is that the Christian community does not know this Jesus and there is 'no room' in the church for this "tiger, tiger burning bright/ In the forest of the night" (William Blake). 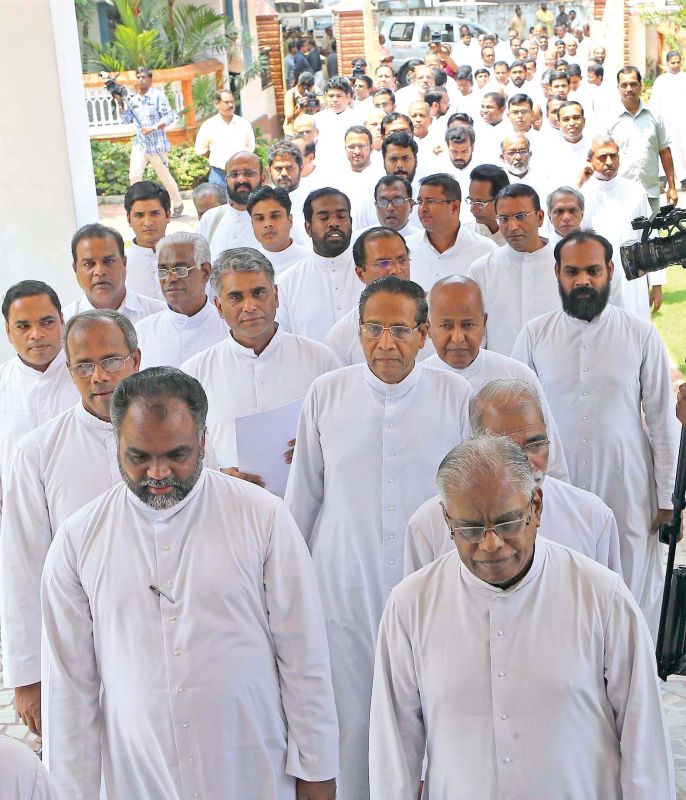 Priests take out a protest march to the Major Archbishop's House in Kochi on Friday.

The most worrisome symptom of the spiritual decay of the Christian community is rampant corruption in education. Christian institutions that do not use schools and colleges as milch cows are an exception today.  The money thus extorted from people -Christians and non-Christians alike- is not accounted for. Ill-gotten filthy lucre serves to swell the egos of the monarchs of mediocrity, who lack the spiritual and cultural maturity to handle resources unwashed in sweat, toil and moil, with restraint and integrity. They go berserk. Only look at the scandalous lifestyle of these leaders, folks. No further proof is required. The terrible outcome of corruption in the church is intolerance and oppression. Those who sit on the thin ice of indefensibility are plagued by insecurity. Gnawed and burdened by persecution complex, they over-react to anything that seems to be inimical to their interests. This degrades congregations into islands of slavery and conformity.

I have looked far and near to discover a congregation to which I can belong without having to stifle my conscience. I have been a busy and popular preacher for over three decades. I haven't had platforms from where I could speak the biblical message and not get blacklisted for it. You get damned, on the very first sign of not toeing the line of the officialdom. The tragedy, as Soren Kierkegaard says, is that Christians know not what it means to be Christian. The most exhilaratingly difficult thing in the world, he cried out in the middle of the 19th century, is to be Christian. Therefore 'run away!', he said, if you can help it. Of course, Kierkegaard was not asking people to run away from spirituality. He was only inviting them to know what an exalted challenge it is to be a person of faith. The key to his words lies in his heart-broken scream, in the course of his agonized exchanges with Bishop Munster, "there is no Christian in Christendom".

Of course, Christians sound worried about the emerging political abuse of religion. But that is not what worries me most. It is the ongoing covetous rape of the biblical faith by those who are mandated to be its custodians. Wanting to reform all faiths other than one's own is the prevailing fashion. It is a profitable undertaking. But, to me, the cleansing operation needs to begin at home. We must be a little more intolerant of depravity within our own religious folds and a little less intolerant of blemishes elsewhere. That is what Jesus taught. And, if this surprises you; then know that what I have sketched above is nothing but the truth. Jesus said, "the truth will set you free".

(The author is a former principal of St Stephen's College, Delhi).

Maharashtra government worried about international travelers coming via other states