Kanhaiya Kumar's photo along with his female friend that went viral. (Photo: Facebook)

New Delhi: Since February 9, Jawaharlal Nehru University Students' Union president Kanhaiya Kumar have been bestowed with unwarranted popularity. In a newfound development, Kumar has once again been shown in a bad light owing to an alleged photo that is doing rounds on social media.

The picture had Kanhaiya along with his female friend Saumya Mani Tripathi, a JNU student, sitting beside her with gestures extremely amiable. Though the photo doesn’t hint at anything illicit between the two, social media is being flooded with assumptions of Kanhaiya’s alleged closeness with the aforementioned friend.

Read: Won’t get provoked by any violence, says Kanhaiya Kumar

The JNUSU president in a video clarified his stand on the newfangled development. “Is it right to defile a woman without any consolidated proof? We talk of respecting women and venerating her, but the way my friend has been chastised for a simple photograph is uncalled for. Is it wrong to click a photograph with a friend?” laments Kumar.

Rubbishing the claims thronging social media platforms, Tripathi took to her Facebook wall to put forth her stand on the issue. “ People’s sick mentality saddens me. The photo about which people are getting gaga on social media is like any other normal photo. The way it has been put forth on varied platforms isn’t acceptable. I don’t think so I have committed any wrong by clicking a picture with Kanhaiya,” retorted Tripathi. 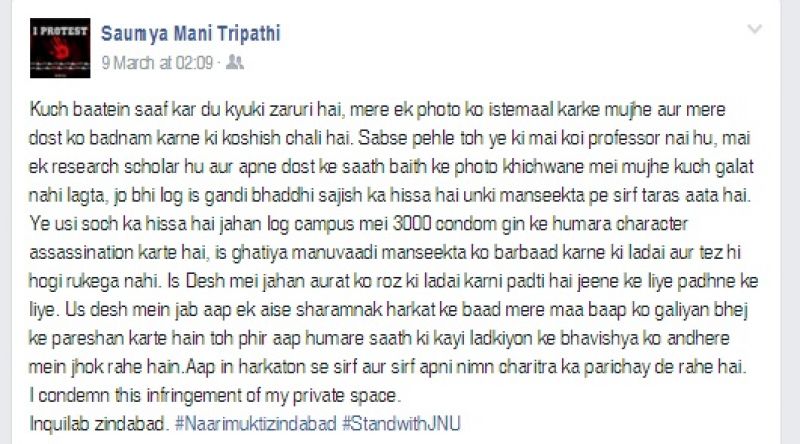 Unsure of Tripathi’s professional stature, she was initially termed as Kanhaiya’s professor. Irked at the untoward tittle-tattle about her, she added, “I would also like to clarify that I am a research scholar at JNU and not a professor.”

“In a country wherein, women are subjected to incessant impediments at every stage, and the way my parents have been abused after the picture went viral on social media platforms, I would like to warn you of the bleak future which might befall the girls of this nation if issues like this aren’t protested,” said Tripathi.

Read: Kanhaiya Kumar is attacked by ‘outsider’ on JNU campus