After an ultrasonography of her abdomen, she underwent some procedures on September 16, 2006. Dr Ch Ravinder Rao, general surgeon and urologist, assured her that there would be no further pain. (Representational Image)

Hyderabad: The Hyderabad Consumer Forum ruled in favour of a 13-year-old complainant in a case of medical negligence and ordered a senior urologist, the Indian Medical Association (AP) and Satya Nursing Home - all held jointly responsible - to pay a sum of Rs 6,00,000 with an interest of nine per cent per annum from the date of complaint in 2008, and Rs 5,000 towards costs.

Thirteen-year-old Aitha Yashaswini was admitted to Satura Nursing Home in Karimnagar, with a complaint of severe abdominal pain.

After an ultrasonography of her abdomen, she underwent some procedures on September 16, 2006. Dr Ch Ravinder Rao, general surgeon and urologist, assured her that there would be no further pain.

However, a month later again, the intense pain recurred and she was admitted again. The doctor convinced the girl and her parents to undergo another procedure, though they were hesitant to do so. A month later, Aitha’s pain returned. A high resolution real time ultrasonography was done, in which the left ovary could not be visualised, which meant that the doctor had removed the left tube and ovary during the earlier surgical procedure, which was gross negligence, the complaint said.

The complainant further alleged that her parents were not advised to take her to visit a gynaecologist for another technique of laparoscopy which is preferred for women below 35 and would not have led to long incision scars.

The doctor claimed that he had informed the father of the minor of all procedures and had even advised them to visit a gynaecologist.

However, the girl was brought to him a second time. He pleaded that there was no deficiency of service from his side as the doctors who attended the surgery were qualified and consent was taken from the parents. However, the consent was given for another procedure and not for removing her reproductive organs.

The Indian Medical Association filed a counter stating that although the doctor was a member of the IMA (AP) thus making him eligible for the Professional Protection and Welfare Scheme, the by-laws state that if there is negligence by the doctor, the IMA will not come to the doctor's rescue. The IMA said that it was ‘ridiculous’ for the association to be made party to each and every default of every individual doctor.

The nursing home also stated that there was no deficiency of service. The forum referred to an earlier case — The Holi Cross Hospital Vs Shri Maniram, 2009 — and stated that the signed consent form taken by the doctor would not be valid as the consent was given for Laparotomy and not removal of the left tube and ovary.

The forum also noted that the complainant will suffer from hormonal imbalance and will need further medical treatment which can mar her chances of marriage. The forum ruled in favour of the minor stating that all the three parties were held jointly responsible and ordered payment of the sum. 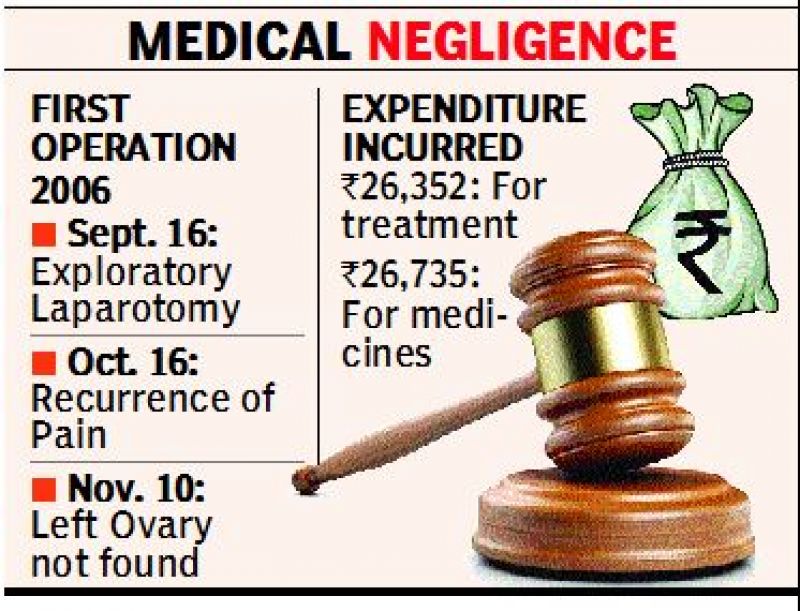