AIADMK General Secretary VK Sasikala presenting the letter of presumably the MLAs support to her candidate to stake claim during the meeting with Tamil Nadu Governor CH Vidyasagar Rao at Raj Bhavan in Chennai. (Photo: PTI)

Pandiarajan is the first cabinet minister to join Panneerselvam camp.

Pandiarajan, the suave face of the AIADMK, arrived at the Greenways Road residence of Panneerselvam with his supporters and joined his group in the presence of other dissident leaders, including former Minister K P Munsamy and Rajya Sabha MP V Maithreyan.

"My belief is that here is the man who has captured the hearts of the masses. Amma's legacy will continue to rest on his able shoulders and that is the reason I am here," Pandiarajan said.

"We are here as followers of Puratchi Thalaivi Amma," he said, adding that the "spirit of the masses" would carry the party through.

"This is the voice of the collective," he said, referring to support for Panneerselvam.

"Every other MP and MLA will see the writing on the wall and will be right here," Pandiarajan said

To a question, he said "we have no doubt about Governor Ch Vidyasagar Rao's impartiality."

Stating that if a non-member of the Assembly were to be sworn in Chief Minister, he or she should have the scope to get elected to the House within six months, he said "the Governor should evaluate this aspect and we believe he is doing it."

He expressed confidence that the caretaker government would transform into a permanent regime.

Hours before he joined hands with Panneerselvam, Pandiarajan had said he would listen to the voice of his voters.

"Will surely listen to the collective voice of my voters & decide in a way to uphold the dignity of Amma's memory & unity of AIADMK," he had tweeted.

Welcoming Pandiarajan, Pannerselvam said "let us all unite and slog and guard the people."

Thanking Pandiarajan, the Chief Minister, in a veiled attack on Sasikala and her family, said "let us work and stop the party and government slipping into the hands of a family."

Pandiarajan had been criticising Panneerselvam till recently. He had alleged that Panneerselvam was instigated by opposition DMK to split the party.

Meanwhile, Sasikala, who is backed by majority of MLAs so far, wrote a letter to Governor Ch Vidyasagar Rao questioning the delay in oath-taking ceremony and asked him to "act immediately to save" the sovereignty of the Constitution and democracy. 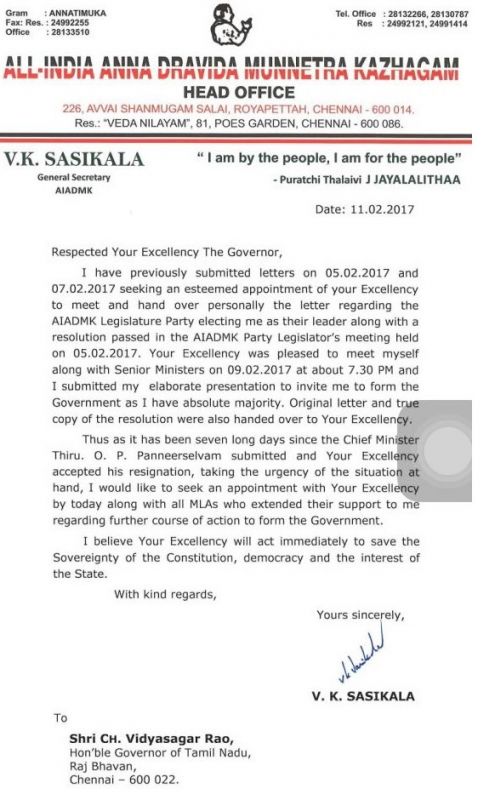 Governor is of the view that it would not be prudent to call VK Sasikala to form a government now in view of the impending Supreme Court judgement in the corruption case in which she is an accused, sources said.

A day after meeting the leaders of the warring factions, the Governor sent his detailed assessment of the “extraordinary situation” in Tamil Nadu to the Centre which, according to reliable sources, may have dashed Sasikala’s immediate hopes of being sworn-in as chief minister.

It is believed the Governor has also concluded that there should be a reasonable guarantee that the person who is not a member of the Assembly should have the ability to be elected to the Assembly within six months of being named as CM.

The Governor is reported to have said in his assessment: “Even when there is iota of doubt about the ability of the person to get elected to Assembly within six months, Article 164 (4) has to be interpreted as a restriction/disqualification as contained in the interpretation of Supreme Court mentioned above.

The report is said to acknowledge the fact that the “Governor is also bound by Constitution to satisfy himself that a person staking claim would form a stable government. In view of the impending judgement in the DA case as uncertainty exists about the qualification of VK Sasikala to become MLA”.

The source who revealed the Governor’s thinking and his possible line of action also said pending court cases have been mentioned as an impediment to calling the particular person now.

The decision means that without the concurrence of the Centre or instructions to the contrary, the Governor will first await the SC judgement in the Sasikala case and so is in no hurry to either invite, O. Panneerselvam or Sasikala for a show of strength. A peculiar situation in this case, the Governor is said to have stated in his report, is the resolution of the AIADMK legislators actually proposed by O. Pannerselvam.

“In the resolution given by V.K. Sasikala it is seen that it is mooted because O. Pannerselvam informed Sasikala of his resignation having being submitted to Governor.”

It is also noted that O. Pannerselvam has proposed the resolution and also signed the same. Now Pannerselvam has stated that he was constrained, forced and coerced to sign the resignation letter under duress and therefore requested to rescind any action taken thereon.

“The current situation in Tamil Nadu presents a unique set of constitutional issues with no precedent of this kind. Here is a person who stakes claim to form the government based on the resolution passed at a meeting of the party legislators. But she is not a legislator of the Assembly. Hence it is not a straight case under Article 164 (1) but has to be considered under Article 164 (1) read with Article 164 (4).

Rao, who has sent a detailed report to Centre on the developments in TN, also asserted that since OPS is the caretaker CM, “there is no vacuum and hence there is no need for being unduly alarmed.”

Andhra Pradesh has no dues to power gencos, says government

Misuse of probe agencies help corrupt get away: Congress

Bill to privatise electricity in LS, is sent to Parliamentary panel