An 8 ft tall compound wall has been built over 20 kms around the DRDO campus, which will also have a watchtower every 2 kms.

Challakere: Villagers of Dodda Ullavarthi in Challakere taluk are mystified by Pakistan's claims that they are living on top of a secret underground nuclear facility where a purported Uranium Enrichment Plant is set to come up.

A cattle hand, watching over his prized Amrit Mahal indigenous cows graze in the Kaval grasslands said local Kannada newspapers had reported what Pakistan said as well as India's response rubbishing the claims as a figment of Pakistan’s imagination. "Our lands have been acquired, but is our water and land, now in danger of contamination? We don’t know. We look at our parched lands. There is no water. What nuclear facility are they going to build here," he said. "There’s nothing going on here,” he said, refusing to share his name.

Scared that they will become targets of a terror attack, however, there is an air of anxiety in Nayaka-nahatti and surrounding villages of Challakere.

“If you feed them (local population) with this kind of information (harmful effects of radiation because of plans to make a Hydrogen bomb), they will certainly protest. We have an enrichment plant near Mysuru, but where is the Hydrogen cloud?” an official asked, confirming plans for establishment of a nuclear enrichment plant near Challakere.

Foreign publications had also reported that  dilapidated buildings on an abandoned sheep farm were renovated to house the Talent Development Centre (TDC) by IISc to train science teachers at all levels, and to accommodate them during a ten-day residential training session.

"But, they also said -wrongly - that hydrogen bomb assembling activities are going on at the campus", said a top source. In fact, contrary to  Pakistan's claims that "India is building a secret nuclear city and had accumulated a stockpile of nuclear weapons which threatens to undermine the strategic balance of power in the region," there's much more on the anvil than just a nuke facility.

First off will be an Aeronautical Test Range (ATR) of the DRDO that is nearly ready for inauguration. The test range will become operational on  a few projects in about six months and expand in stages, according to high level sources. 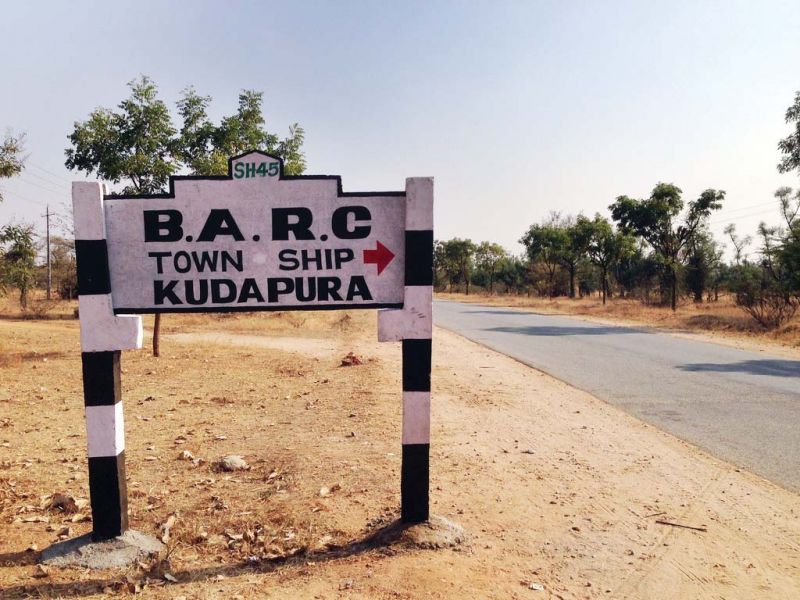 A board indicates the planned BARC facility at Challakere

An 8 ft tall compound wall has been built over 20 kms around the DRDO campus, which will also have a watchtower every 2 kms. "Once the work is done, the campus will come under the watch of military personnel," sources said, adding  it would take a couple of years for commissioning of either the atomic power plant or the centrifuges, countering the report in Foreign Policy magazine that the facility would be ready by 2017.

The same goes for the modern test facility being built by Defence Research and Development Organisation (DRDO) for its Unmanned Combat Air Vehicles (UCAV) project and other advanced programmes in aerospace and missile technology. A couple of hangars are almost ready, as also the runway, which has been designed to cater to fighter jets or large transport aircraft. Among those likely to be inaugurated next year is the Climate Research Centre of IISc, and funded by Indian Space Research Organisation (ISRO), says an official source.

The Indian Army, too, would commence work on its Commando Training Centre (CTC), on a couple of hundred acres allotted to in this 8000 acre campus. With many key facilities coming up at Challakere, the government will ensure foolproof protection by armed commandos, said sources in the ministry of defence.

Sources said, severe drought  in the district affected the construction work  at the new military-industrial-nuclear complex coming up on the Amrit Mahal Kaval grasslands.

Western media reports in 2015 had claimed that India was building a top- secret nuclear city at Challakere in Karnataka, citing experts as saying it will be the subcontinent's largest military-run complex of nuclear centrifuges, atomic research laboratories, and weapons- and aircraft-testing facilities when it's completed and that the aim is to expand the government's nuclear research, to produce fuel for India's nuclear reactors, and to help power the country's fleet of new submarines, and give India an extra stockpile of enriched uranium fuel that could be used in new hydrogen bombs, or thermonuclear weapons.

In fact, the only buildings being put up here currently are houses for  engineers and scientists  at the campus of Bhabha Atomic Research Centre (BARC) near Dodda Ullavarthi in Challakere taluk of Chitradurga district.