Shabbir Ahmed stands as his son Mohammed Abdul Kareem holds up an iron plaque, where the verses of the Holy Quran were engraved.

Hyderabad: A Hyderabadi family is engaged in the fascinating and painstaking task of engraving the Holy Quran on iron plaques. Once completed it will be a unique piece – a Quran inscribed on flattened hard metal.

Seventy-year-old Shabbir Ahmed is a retired chief designer in the Government Printing Press.

A resident of Tappachabutra, he started the project and he was aware that it will not be completed in his lifetime. He has made his two sons, Mohammed Abdul Wasif and Mohammed Abdul Kareem, promise that they will carry on his work.

With a steady hand, Mr Ahmed works with his tools for one or two hours every day.

Mr Ahmed’s forefathers were also engravers and designed logos and emblems for the Asif Jahi rulers (the Nizams) and their departments. His two sons are also engaged in the engraving work. 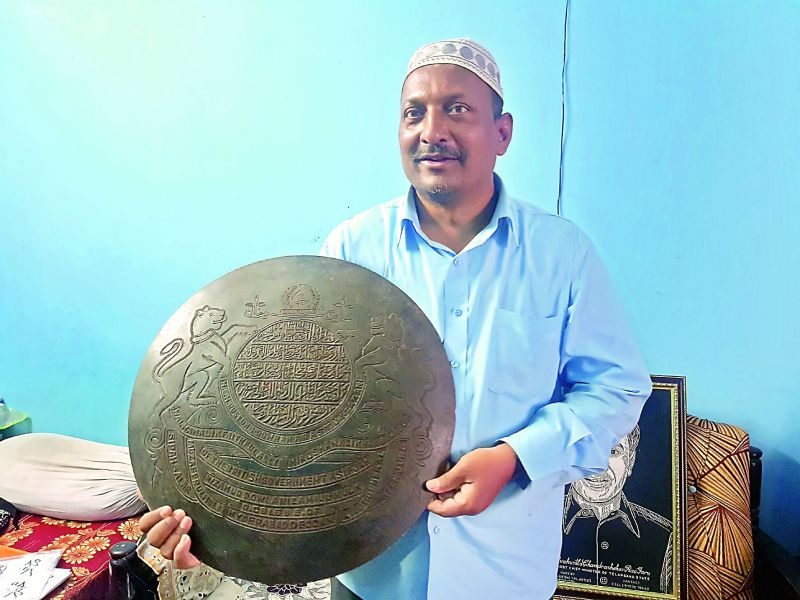 Mr Ahmed is engraving the holy verses on 18-gauge 17x12 inch plaques, on both sides. So far he and his sons have completed 28 plates. To engrave the verses they fix the iron plate on a frame, and take a lump of clay which is called raal. A photocopy of a page of the Quran is pasted on the lump of clay for making impressions of the letters using dots. Thereafter, they begin incision with small sieves.

Before starting the work, Mr Ahmed says they do the wadhu (ablution), which is compulsory before one touches the holy book. They have to rest after completing one line as the work is so arduous.

Shabbir Ahmed takes six or seven hours to carve a single line. He engraves 15 lines on each side of the plate. He completes just one plate a month if he works really hard.

To complete the Quran, the Ahmeds have to make some 300 such plates — the time taken to engrave all plates would be 300 months or 25 years.

Mr Ahmed is also an expert in Bidari and used to make sherwani buttons with logos and name of the user, but he stopped it as it is a delicate work. He and his sons have also prepared portraits of many famous personalities on metal plates, including former US President Barack Obama and his wife Michelle Obama, the Sultan of Oman, Andhra Pradesh Chief Minister N. Chandrababu Naidu and AIMIM president Asaduddin Owaisi.

They have now completed an engraved portrait of TRS chief K. Chandra-sekhar Rao and want to gift it to him after the elections.

He said his ancestors were in the service of the royal family and even after the merger of Hyde-rabad, he and his brothers provided their services to Prince Mufakham Jah and Prince Mukram Jah.

They engraved name and signs on the firearms of the Nizams and made many ornaments, pots, utensils and vessels in gold, silver and other metals.

Over 8 lakh devotees expected in Srisailam for Shivaratri Brahmotsavam