Satyarthi said child abuse survivors, their families, some of the ministers as well as religious leaders of different faiths will also participate in Bharat Yatra. (Photo: Kailash Satyarthi)

Mumbai: Come Monday, September 11, the country will start its fight against child sexual abuse, rape and human trafficking, unanimously raising their voices against atrocities meted out to children.

Bharat Yatra, the brainchild of Nobel Laureate Kailash Satyarthi will commence from the coastal city Kanyakumari in Tamil Nadu on September 11 and the 11,000 kilometre march will tour 22 states before culminating in the national capital on October 16. 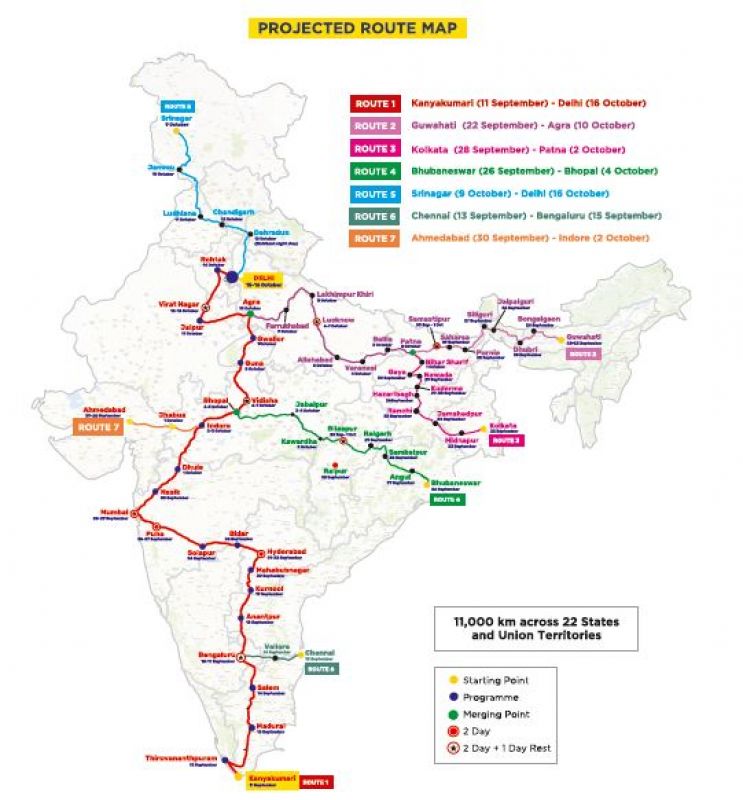 Bharat Yatra will start from Kanyakumari in Tamil Nadu the 11,000 kilometre march will tour 22 states before culminating in the national capital on October 16. (Photo: Kailash Satyarthi)

Talking to Deccan Chronicle about the 35 day 'Bharat Yatra', Satyarthi said child abuse survivors, their families, some of the Union ministers, Member of Parliament, MLAs, chief ministers, Governors as well as religious leaders of different faiths will also participate in Bharat Yatra.

He said, “At least one million people, mostly youth, would join the march and I hope one crore people will pledge against child sexual abuse and trafficking.”

“Six other marches from Ahmedabad, Bhubaneswar, Chennai, Guwahati, Kolkata, Srinagar will join with the main ‘Bharat Yatra’,” according to the Nobel laureate.

Satyarthi said the theme of this march is ‘Safe Childhood, Safe India’.

Asserting that he has declared a war against rape, sexual abuse and child trafficking, Satyarthi said, “It is not an ordinary crime. This epidemic is growing everywhere and haunting our nation.”

He added, “Our children are not safe either in homes, schools or neighbourhood or anywhere and the perpetrators roam freely."

Satyarthi went on to add that people have advised him that now that he has won a Nobel for himself, he should sit back and relax. However, Satyarthi differs in that opinion.

“My war for children and making the country safe for them will not end,” he said, adding that he will continue to fight for them “till his last breath.”

Talking about what triggered him to carry out the march in such a large scale, Satyarthi said, "For the last one year I have been meeting rape survivors and their families and every story has touched and moved my heart. I have seen that girls between the ages of 4 to 9 years have been the victim of this heinous crime. They have been brutally raped and the victims are moving like a free bird."

"The oscillating pendulum of is stuck at one place where the victims are leading a fearful life while survivors are moving fearlessly," he added.

Satyarthi said even the boys are not safe at present times.

"Boys are either raped by family member or relatives and they cannot speak about it because of fear of ostracization.”

Parents just do not talk about their child being raped or sexually abused as they think it to be a taboo and the societal embarrassment.

Talking more about his meeting with rape survivors and their families, Satyarthi said, "The physical bruise of a survivor can be healed but no one can help the victim to overcome the mental trauma they had undergone."

He said the voice of survivors and families will strengthen the yatra as people will witness the trauma they had suffered.

Satyarthi went on to add that the Protection of Children from Sexual Offences Act (POCSO) is a good law. The conviction rate is abysmally dismal and over 90 per cent cases, lodged under the Act, and are pending in the courts.

Talking about the cooperation from his family in the yatra, Satyarthi said his wife and son will be actively participating in the march while his daughter, who resides in Mumbai, will also be involved for a few days.

Satyarthi also hailed ‘Right to Privacy verdict’ of the Supreme Court and said the verdict will help bring a lot change in the law for children and the atrocities they face.

Joshimath could be on razor's edge

Yogi's team invites TS pharma firms to invest in UP