Protesters burnt tyres on a prominent road in Bengaluru during Karnataka bandh. (Photo: Satish B.)

Bengaluru: The city was completely shut on Friday with activists pouring onto roads, shouting slogans and burning tyres at prominent junctions. As the issue is emotional, sensitive and closer to the hearts of Kannadigas, Bengalurueans stayed indoors from 6 am till 6 pm, after which the city returned to normal.

Almost all commercial establishments remained closed voluntarily. A few IT companies at Manyata Tech Park, Vijaya Bank and a Supermarket in Basavangudi were open, but were forced shut by activists.

Apart from milk and newspaper supply in the morning, and a few medical shops remaining open, all other business establishments and industries remained shut. Hospitals functioned normally, and ambulances were not stopped by protesters. KSRTC, BMTC and Metro services remained suspended till 6 pm. Air and train services were uninterrupted, but passengers who landed in the city were stranded with no taxi, auto or bus services.

Those heading out of the city had arrived at the airport and railway stations far ahead of their scheduled departure time, some even arriving Thursday night itself. “International travelers arrived 6-12 hours before their scheduled departure and were seen catching some sleep at the Kempegowda International airport. There was a traffic jam at the airport around 5 am,” said a  source.

Roads, bus stations and bus depots across were deserted. The number of protests and demonstrations was more in West Bengaluru, as compared to the Eastern parts. Thousands of people gathered at Town Hall, Freedom Park and Maurya Circle, protesting against the step-motherly treatment meted out to the state by the Centre. They burnt effigies of Tamil Nadu CM J. Jayalalithaa and CM Siddaramaiah.

Hundreds of activists were seen going on bikes and in cars asking residents to support the bandh.

Tension prevailed when an electronic scroll of Bible verses in Tamil on a display board at St. Peter’s Church in Raipura in J.J. Nagar was pelted with stones. However, there was no clash or any major damage to the church property, said the J.J. Nagar police, who have taken up a case.

Members of Karnataka Rakshana Vedike attacked a cab driver while he was ferrying a passenger near the City Railway Station. The police intervened and ensured the cab driver left the spot.

Activists overturned an auto and attacked an auto driver in Mahalakshmi Layout. The police rushed to the spot and took control of the situation.

There was complete chaos at Vijaya Bank when its employees decided to work behind closed doors. Activists protested and urged the employees to stop working and participate in the bandh. 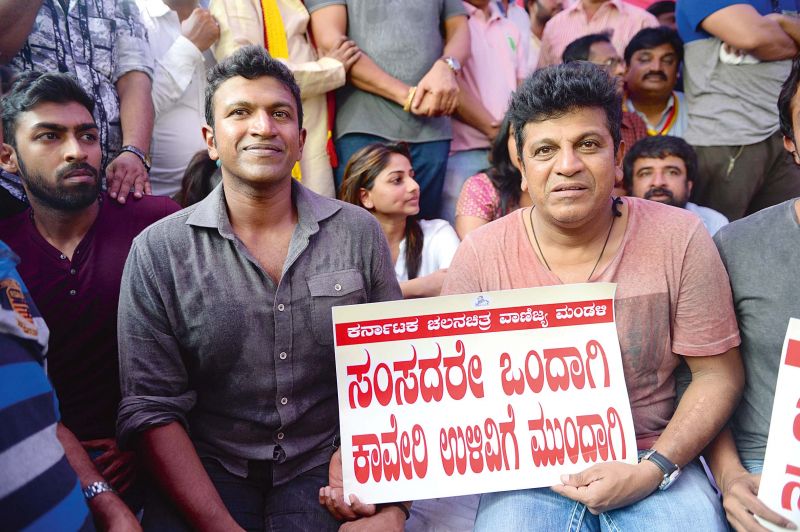 Actors Puneeth Rajkumar and Shivrajkumar at a protest meet against release of Cauvery water to TN, in Bengaluru on Friday. (Photo: DC)

Political leader Vatal Nagaraj led a big protest from Town Hall to Freedom Pin the afternoon. He asked the state government not to release water and warned that Kannada organisations will continue their protest if the government does not changes its stance. Mandya Youth Group members protested at Jantar Mantar in New Delhi and raised slogans against Tamil Nadu's high-handedness.

Flags, maps sell briskly
Karnataka maps and flags sold like hot cakes across the city. Scores of buildings with glass facades sported Karnataka map and flags as a mark of support to the bandh and to prevent protesters from stoning the buildings.  Malls, buildings housing IT industries and tech parks sported maps and flags. Some even covered their building with nets to prevent damage. A large number of auto and taxi drivers and bike riders bought flags to tie it on their vehicles.

Pourakarmikas support bandh
Garbage clearance was hit at the Rajarajeswharinagar zone on Friday as majority of pourakarmikas stayed away from clearing garbage and took part in rallies and protests. They will, however, get back to work on Saturday.

Humane side of the bandh
An autorickshaw was allowed to ply by a group of protesters on Mysore Road after they learnt that the passenger was a patient on his way to a hospital.

No Tamil newspapers
Newspaper vendors did not to distribute Tamil newspapers throughout Bengaluru as a mark of protest. Seven Tamil dailies are distributed in the city. Also, around 53 Tamil channels went off the air.