The brave men, without formal training in disaster management, coordinated themselves like a professional force, reaching out to stranded people in remote areas, guiding the armed forces to distribute essential supplies, and in ferrying to safety over 65,000 people.

Yet another August, yet another spell of lashing rains, yet another time of uncertainty and panic… When history repeats, ironically, on the anniversary of the devastating floods, the unhesitant valiant heroes chip in to save lives when nature unleashes its fury yet again. When reports started pouring in about incessant rains flooding various parts of Kerala, triggering landslides and putting lives in peril, fishermen informed Chief Minister Pinarayi Vijayan that they are ready!

The brave men, without formal training in disaster management, coordinated themselves like a professional force, reaching out to stranded people in remote areas, guiding the armed forces to distribute essential supplies, and in ferrying to safety over 65,000 people. As a token of gratitude for last year’s heroic and well-coordinated rescue operations and as a recognition of their act, 177 fishermen were inducted to Kerala’s coastal police force earlier this year.

With heavy rains predicted for a few more days and red alert issued in several districts, the situation is grim. 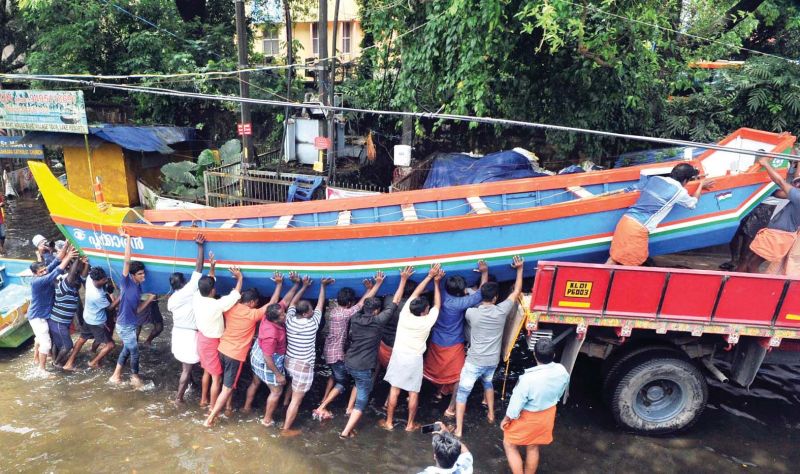 Overflowing rivers and frequent landslides have affected most of the districts and with many dam shutters opened, several parts of the state are inundated. Since daybreak, fishermen — alone and in groups — have been rushing their boats to the affected areas. “Around eight canoes have already set off for rescue ops in the morning from Vypeen,” says Charles George, president of Kerala Matsya Thozhilali Aikya Vedi. “We are well-prepared.

Since the red alert has been issued, we will be sending more boats tomorrow. Fishing boats have been sent from Chellanam to ferry people. In-board boats will be transported in container lorries from Vallarpadom terminal.

We have talked it all with union leaders. Everything is in place," he says. “The advantage fishermen have over others is their unparalleled willpower,” states T. Peter, general secretary of National Fish Workers Forum. 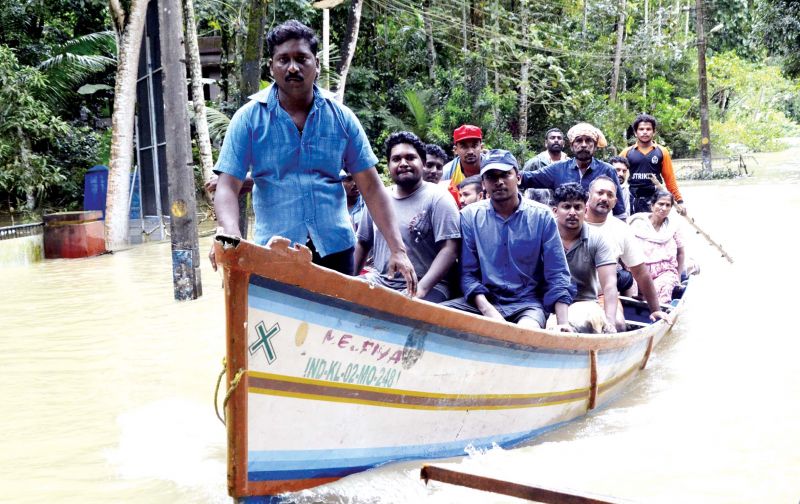 ‘Last time, people were overconfident. This time, they are alert. The moment they received alerts, they started shifting to safe places’

“They spent time in the sea for several days at stretch. Hunger or thirst will not affect them like others. Their mental and physical strength, brotherhood and strong survival skills place them on a higher pedestal among the rescue and relief operators,” observes Peter, who adds that 20 boats from coastal Parappanangadi, Tanur and Chaliyam have already been pressed into service at various parts of North Kerala. Equipped with their fishing boats, GPS system, coir, tools and fishing equipment, the fishermen are working in tandem with the district administration to coordinate operations.

Though all the rescuers showed exemplary courage while coordinating a never-before-seen situation, this time, they are a bit more alert and prepared. Shiva, a fisherman from Kollam, an active rescuer in both the flood spells, observes a change in public attitude. “Last time, people were overconfident. They never expected that floods would reach their homes and refused to evacuate. When the water rose wiping out everything in sight, they panicked and called out for help. We rescued all those who could be reached. This time, however, people are alert. The moment they received alerts, they started shifting to safe places,” he says.

A native of Cheriyazheekkal in Kollam, Shiva recalls the hurdles in way of the rescue mission. “There were many people who came to watch the show. Boats meant for rescue were ferrying people who didn’t know even to swim; they just wanted photo ops. This time, that won’t repeat. People now know that saving lives is a responsible act,” he says.

Peter suggests that it’s not just fishermen who have to be responsible, but the administration, too. “The Disaster Management Authority manages a disaster only when it occurs. Had they been prepared and put well-planned measures in place, there wouldn’t raise such situations. Last time, all the dam shutters were opened together. It should have been planned well. People should be alerted about the upcoming climatic condition,” he says.

Moreover, focus should be on averting natural disasters in future. “Any activity that upsets the nature’s balance should be thwarted. Preventive measures like river bed conservation and coastal conservation should not be at the cost of our safety. When sea walls are erected, marshlands are filled and mangroves are cut down, it should not upset the nature, resulting in such largescale disasters in the long run. It takes years of deforestation that results in landslides like this. Responsible preventive measures are all what it takes to avert tragedies,” says Peter, stressing that whatever situation rises, fishermen will be there to show the world the strength of humanity and selflessness.

Though the whole world calls them superheroes now, during the floods, it wasn’t always a welcoming situation for fishermen. Peter says, “There were people who refused to enter our boats, who refused to even open the gates or doors to us. There were people who wanted to be airlifted and not be ferried. These all made operations difficult, but we managed to save over 65,000 lives. When our coastal areas were affected in natural calamities, no one took care of the heroes’ household; no one rushed to save us. But we will always be there for you, ready to save your lives.”

Gujarat man's father rises from the dead, according to SMS from hospital