DECCAN CHRONICLE WITH AGENCY INPUTS
Published Aug 10, 2018, 10:43 am IST
Updated Aug 10, 2018, 8:07 pm IST
All five gates of the Idukki Reservoir were opened on Friday as the heavy downpour continued unabated.

An aerial view of the flooded locality of Aluva after heavy rains, in Kerala on Friday. (Photo: PTI)

Kochi: Dam reservoirs and rivers overflowed, sections of highways collapsed and homes were swept away in severe flooding in more than half of Kerala, after days of incessant rains left nearly 54,000 people homeless and killed at least 29, officials said on Friday.

Northern and central Kerala have been battered by heavy rains of the Southwest monsoon since August 8, which has left 29 people dead, including three today.

According to reports, all five gates of the Idukki Reservoir were opened on Friday as the heavy downpour continued unabated.

Two columns of Army have been requistioned for Aluva as the water from Idukki dam is expected to reach the region by 10-11 pm on Friday night.

Of the 29 dead people, 25 died in landslides and four in drowning. State officials said a total of 53,501 people are now housed in 439 relief camps across the state.

At least 60 tourists, including 20 foreigners, stranded at the Plum Judy resort at Munnar since Wednesday were rescued and taken to safer places, state Tourism minister Kadakampally Surendran said.

Home Minister Rajnath Singh will undertake a survey of the flood affected areas in Kerala on Sunday, a Home Ministry spokesperson said.

"Spoke to Kerala CM Shri Pinarayi Vijayan and discussed the prevailing flood situation in the state. I have assured all possible assistance from the Centre to the state government. The relief and rescue ops are going on. MHA is closely monitoring the flood situation," Singh tweeted. 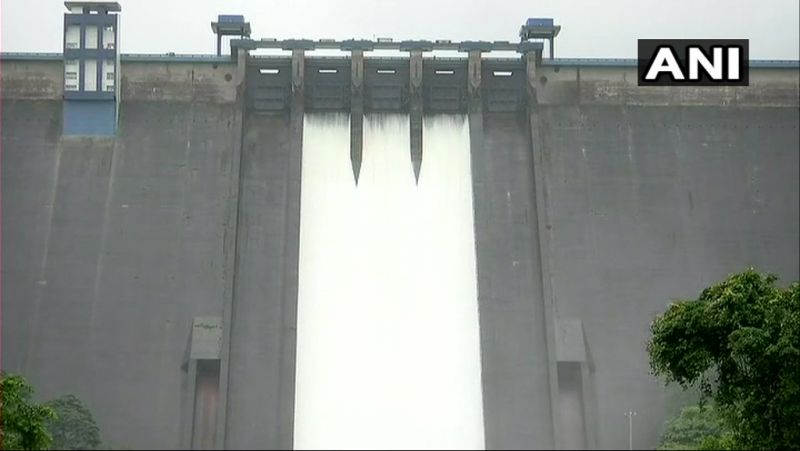 All five gates of Idukki dam were opened on Friday, increasing the water flow into Periyar river. (Photo: Twitter | ANI)

People living downstream of Periyar river in Kochi, and Cheruthoni river in Idukki have been warned of a possibility of inundation of banks.

The Navy has put on alert its Southern Naval Command in view of the rising water level in Periyar river and a possible inundation of parts of Wellingdon Island, surrounded by the backwaters of Kochi. 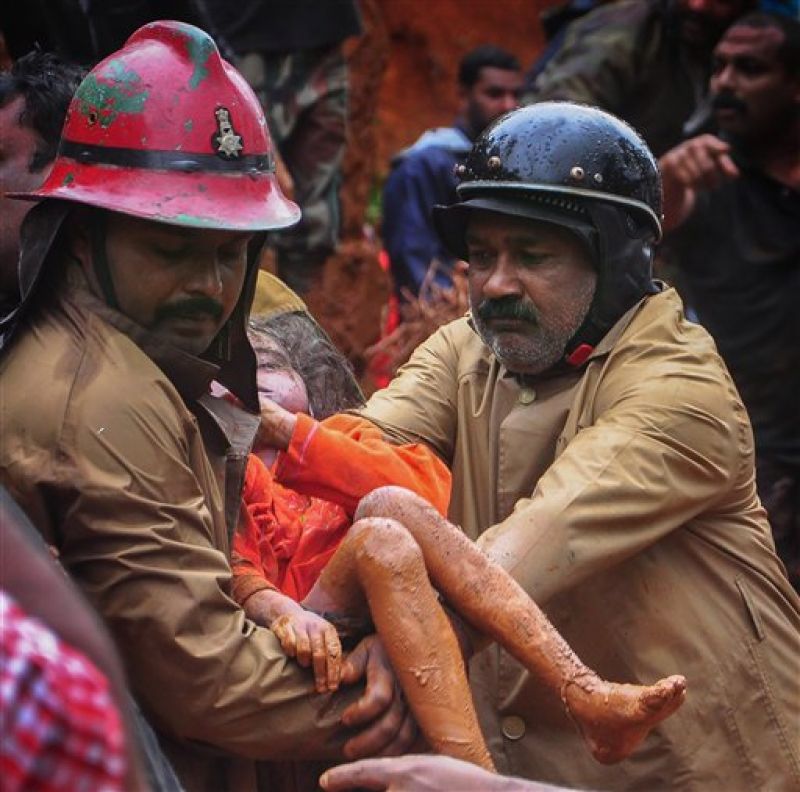 Dramatic visuals of people being washed away in Kaniyambatta in #Wayanad #Kerala. People formed a human chain and tried to rescue them. The hilly districts of #Wayanad and #Idukky are been completely inundated with red alerts issued in both districts. #KeralaFloods #KeralaRains pic.twitter.com/VEfqy32Aum

The South-west monsoon has been vigorous over Kerala resulting in heavy rains in various parts of the state since the past two days. 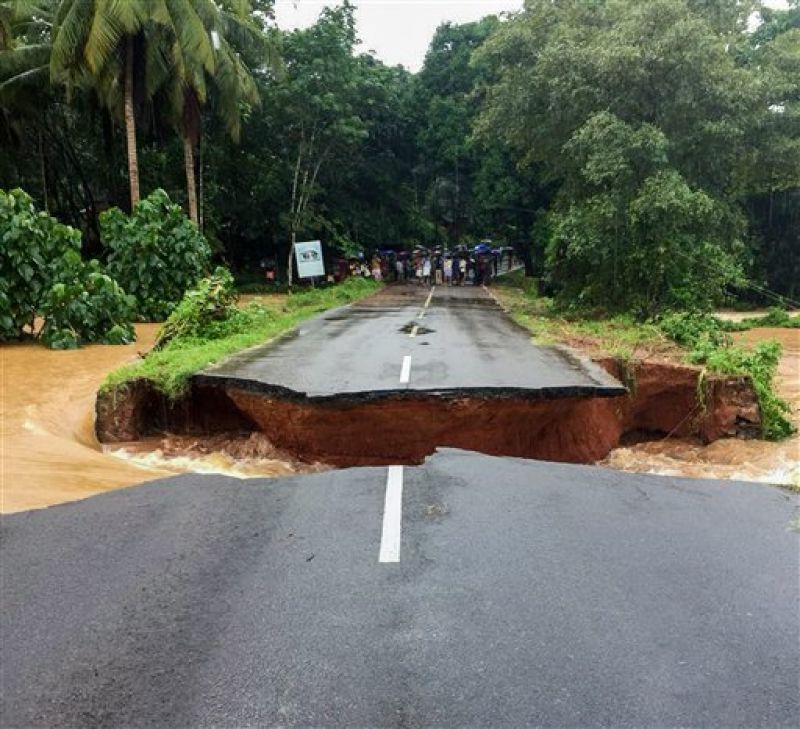 Malappuram: A section of Nilambur- Karad road is seen washed away following a flash flood, triggered by heavy rains, at Malappuram in Kerala. (Photo: PTI)

Chief Minister Pinarayi Vijayan had described the flood situation in the state as "very grim" and it was for the first time in the history of the state that 24 dams had been opened at a time following the water level reaching maximum capacity.

"Spoke to Kerala CM Shri Pinarayi Vijayan and discussed the situation arising due to floods in various parts of the state. Offered all possible assistance to those affected. We stand shoulder to shoulder with the people of Kerala in the wake of this calamity," the PM said in a tweet.

Union Minister KJ Alphons, who is from Kerala, said this is the biggest spell of rain the state has witnessed in five decades. "It is the biggest rain we had in 50 years," news agency ANI quoted KJ Alphons saying. 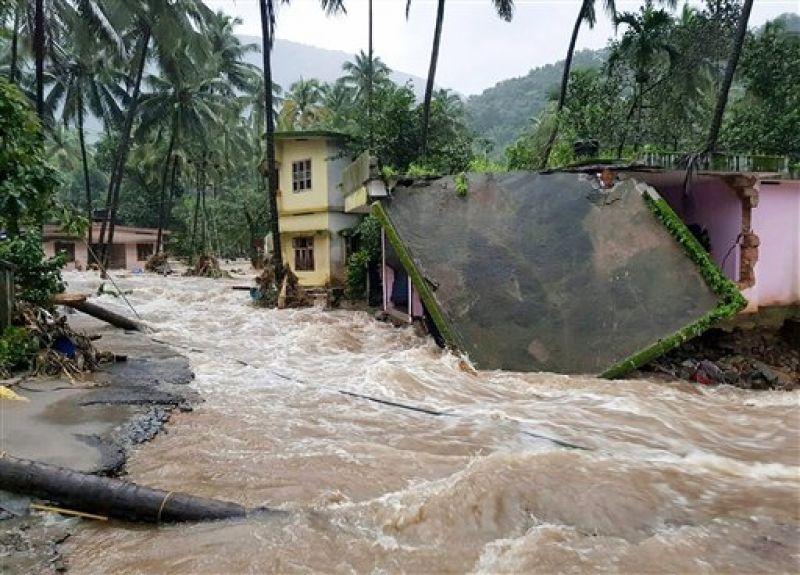 Roof of a house collapses following a flash flood, triggered by heavy rains, at Kodencheri in Kozhikode district of Kerala. (Photo: PTI)

The United States consulate in Chennai issued a travel alert and advised the US citizens to avoid visiting areas affected by landslides and flash flood.

Tourists have been asked to stay away from high range areas and dam sites by the government.

According to state disaster control room sources, 241 relief camps have been opened and 15,695 people have been shifted from low-lying areas.

Over 5,500 people from Wayanad district, where a red alert had been sounded on Thursday, have been shifted to relief camps, the sources to news agency PTI said.

In Ernakulam, 3,456 people have been shifted to camps following floods after 4 shutters of the Idamalayar dam were opened on Thursday.

■US issues advisory, asks its citizens not to visit flood-hit Kerala