Plastic pollution rises regardless of ban

The Central government in 2011 initiated the Plastic Waste (Management and Handling) Rules which mandate proper systems to ensure waste segregation and the disposal of plastic.

Chennai: Twenty-five out of the 29 states in India have some form of regulation on single-use plastics but implementation has been poor due to stringent laws, lack of enforcement and easy availability of plastic.

Environmentalists fear that the huge economic value of the plastic industry has become a deterrent to the effective imposition of the ban nationwide. One of the biggest obstacles to the implementation of plastic bans on the ground is the lack of political will, they say. “Once in a few years, politicians play to the gallery with such announcements about banning plastic bags,” says Yogendran, an environmentalist based in Coimbatore.

Toxics Link, a Delhi-based NGO notes that 15 states of India have placed a complete ban on plastic bags and five states have placed partial bans. Partial bans mean that products using plastic packaging have not been banned. 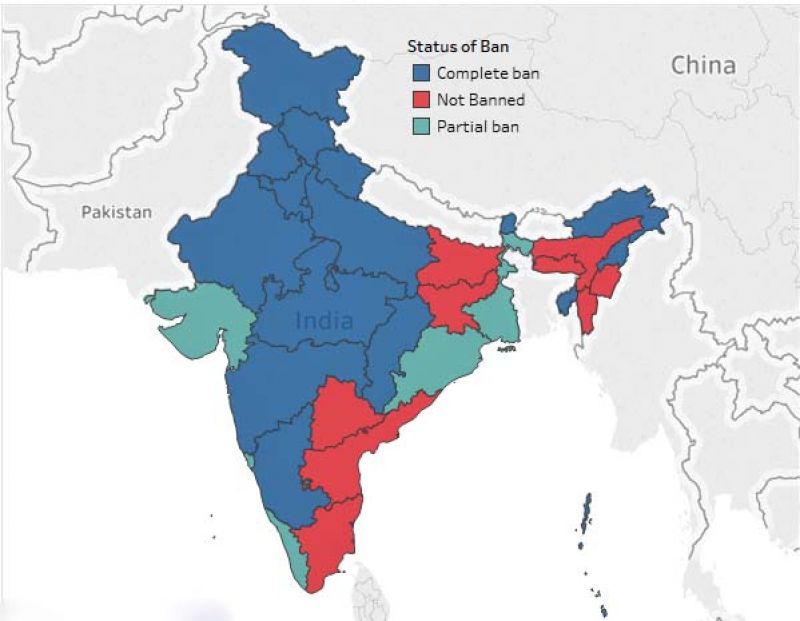 In some states, vendors have not even heard of the ban. If they have, like in Karnataka and Punjab, they choose to ignore it as there is no monitoring mechanism, and supply is steady. “Fining is the only way” says Yogendran. “How did they stop public smoking? The same way, stringent rules will ensure a reduction in plastic pollution.”

According to data from the Central Pollution Control Board (CPCB), plastic consumption in the country went up to three lakh tonnes in 2000 from 61,000 tonnes in 1996 and is predicted to increase up to 178 lakh tonnes in 2018.

The Central government in 2011 initiated the Plastic Waste (Management and Handling) Rules which mandate proper systems to ensure waste segregation and the disposal of plastic. It also includes identifying and shutting down unregistered plastic manufacturing units. But, a 2016 report by the Central Pollution Control Board states that most Indian states have not implemented the rules. According to the report, “plastic bags are stocked, sold and used indiscriminately” even in those 17 states and Union Territories where they are completely banned.

Following this, the government came up with the Plastic Waste Management Rules 2016, with a further amendment added this year. These sought to make it the responsibility of plastic manufacturers to create an effective waste management system including collection and recycling.

Every day, Indian cities generate over 15,000 tonne of plastic of which about 9,000 tonne are collected and processed while the remaining 6,000 tonne are dumped, causing plastic pollution, says an assessment report by the CPCB. Plastic additives from landfills can cause considerable pollution problems by contaminating the surrounding soil, ground or surface waters, it added.

About 1 million seabirds and 100,000 marine mammals die each year globally from ingesting plastic or by getting tangled in nylon fishing line, nets, six-pack plastic can holders, and plastic rope. An independent research conducted by Ishan Foundation states that by the year 2050, the amount of plastic in the sea will exceed the amount of marine life.

The bigger problem at hand is that there are approximately 22,000 plastic manufacturing units in India, producing 5.72 million tonne of plastic each year. These, in turn, contribute heavily to state revenue and now, to the State Goods and Services Tax.

The challenges of implementation across India vary, with most common one being lack of a single authority being able to enforce the ban across states. Most state pollution control boards depend upon municipal authorities to monitor the plastic ban.

However, the state of Sikkim seems to have got it right. Notwithstanding its geographical size, the state has been able to create awareness by conducting intensive campaigns and not just randomised fining.

“Bans will be successful only if the people are made to understand why the product has been banned in the first place,” said A. Sudhakar, Member Secretary, CPCB, in a report. “Sikkim has done that successfully, and it is high time others follow suit. The ban should begin from manufacturing and if possible, turning such units into manufacturing of cheaper alternatives to plastic,” he added.

Is the AIADMK divided over next Tamil Nadu CM?

Gujarat: 8 dead as fire breaks out at Shrey hospital in Ahmedabad