DECCAN CHRONICLE. | COREENA SUARES
Published Jun 10, 2016, 2:16 am IST
Updated Jun 10, 2016, 6:19 am IST
Corporation records fewer dog bites in city, but the data is incomplete as private hospitals are kept out of the ambit.

Children below five and teenagers who ride cycles and bikes are the most vulnerable to dog bites. (Representational image)

Hyderabad: While the GHMC has issued a statement that incidents of dog bites have decreased in the city compared to previous years, two such cases have been reported in less than a week. The municipal body had gathered stats from IPM and Fever Hospital without any data from private hospitals where most dog bite cases are treated.

As per the GHMC Commissioner’s report, there hasn’t been a rabies case in the twin cities in the last two years. As per the survey conducted by the Institute of Preventive Medicines, Narayanguda, around 61,749 dog bite cases were reported in 2015-16. However, the number would be more if cases from private hospitals were to be taken into account.

Mr Achyuta Rao of the State Commission of Protection of Child Rights said that in the recent Vanasthalipuram case for instance, the seven-year-old boy Rohit was admitted to a private hospital and not IPM. 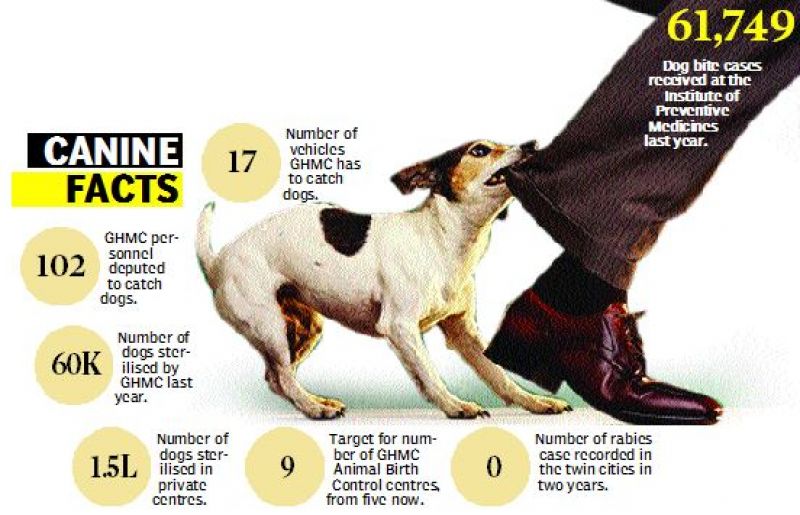 “GHMC does not collect data from area hospitals and primary health centers, but only from Fever and IPM (IPM is not a hospital but many visit due to availability of the vaccine). Those who need to be admitted but cannot afford it go to Fever Hospital, while minor cases go to private centers; so the data is not true. It is the primary duty of the veterinarian head in every circle to visit colonies where most cases are being reported. There is a need for both male and female dogs to be sterilized. As per reports 28 dog bite cases were reported in May 2016 in Greater Hyderabad,” Mr Achyuta Rao told this newspaper.

Children below five and teenagers who ride cycles and bikes are the most vulnerable to dog bites, GHMC officials added. Also, the numbers are increasing in other municipal bodies that have no animal population control scheme.

GHMC vows sterilisation
The GHMC staff has been asked to sterilise all dogs in the city under the Animal Birth Control programme within six months. GHMC commissioner Dr B. Janardhan Reddy said the corporation would extend financial help to private veterinary doctors to do the operations. The National Animal Board charges about Rs 100 for birth control operations and extra for anti-rabies vaccines. The GHMC will extend a similar package to private hospitals.

■Kids don’t know how to face dogs, get bitten
■Pet dogs not ready for affection at all times

Muslim youth to be head of Lingayat math: 'Humanity is the biggest religion'