New Delhi: External Affairs Minister Sushma Swaraj is known for her promptness in helping out Indians who are stuck in difficult situations across the world.

However, on Wednesday, when a student from J&K with ‘Indian-occupied Kashmir’ set as his Twitter location, sought help from her, she gave him a lesson on political geography.

Sheikh Ateeq, who is pursuing medicine course from Philppines, tweeted from his Twitter handle @SAteEQ019 and requested Swaraj to help him with getting a new passport and said he needed to get back to his “home, India” citing his health issue.

“I am from J&K doing medicine course here in Philippines my passport got damaged I applied for new one 1 month ago I request u pls help me to get it as i literally need to go home for medical checkup (sic),” Ateeq said in a tweet tagging Swaraj. 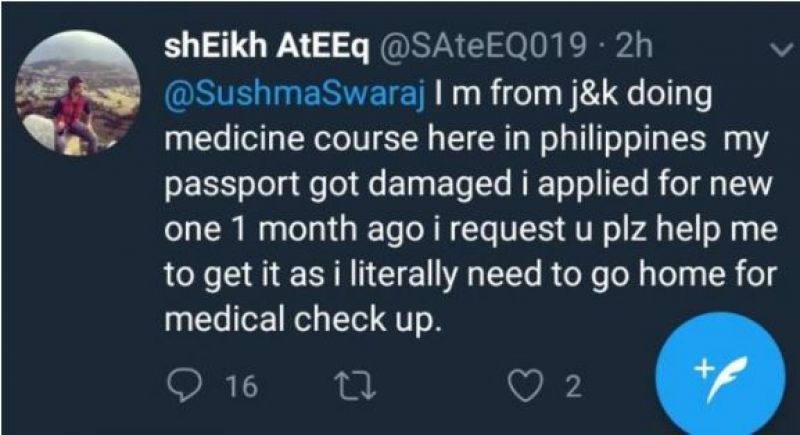 However, while responding to him, Sushma Swaraj said his profile says he is from 'Indian occupied Kashmir', and no such place exists.

"If you are from J&K state, we will definitely help you. But your profile says you are from 'Indian occupied Kashmir'. There is no place like that," Swaraj tweeted back.

If you are from J&K state, we will definitely help you. But your profile says you are from 'Indian occupied Kashmir'. There is no place like that. @indembmanila https://t.co/Srzo7tfMSx

Soon after, Ateeq corrected the location on his Twitter bio to “jammu &kashmir/ manila”.

Minutes later, the foreign minister acknowledged the correction and directed authorities to help him.

“I am happy that you have corrected the profile. Jaideep - He is an Indian national from J&K. Pls help him,” Swaraj tweeted.

2. Jaideep - He is an Indian national from J&K. Pls help him. @indembmanila https://t.co/rArqxIQoN3

However, Ateeq's Twitter profile is not visible since then.

TRS going all out to defeat party rebel in Karimnagar