Study: Kota moves to change fans in a bid to reduce suicides

Suicide is the leading cause of death among youngsters in India, according to a report in the medical journal The Lancet. A majority of the suicides are by men, and many choose to hang themselves from ceiling fans.

Even if preventive steps were taken, experts have long claimed that those who wanted to kill themselves would somehow find ways to do it.

But a growing body of evidence challenges this view. So when Kota — a competitive exam coaching centre hub in Rajasthan — decided to install “safe fans” to check student suicides, parents and psychiatrists welcomed the move.

Experts and parents alike have called for a renewed consideration of the suicide prevention strategies. While mental health and interventions for behavioural problems must always be the important component in treating people who have suicidal tendencies, experts stress on “means restriction” too.

Instead of treating individual risk, “means restriction” entails modifying the environment by removing the means through which people kill themselves. Experts say that not enough attention has been given to restricting the means.

The Kota Hostel Association, an umbrella body of 700 hostels in the coaching town, is planning to install springs in ceiling fans or replace them with wall fans. The elasticity of the spring-fitted ceiling fans would make hanging impossible, and would also sound an alarm with the help a special device, to alert the hostel authorities once the fan had been tugged. So “suicide-proof fans” could help to some extent. 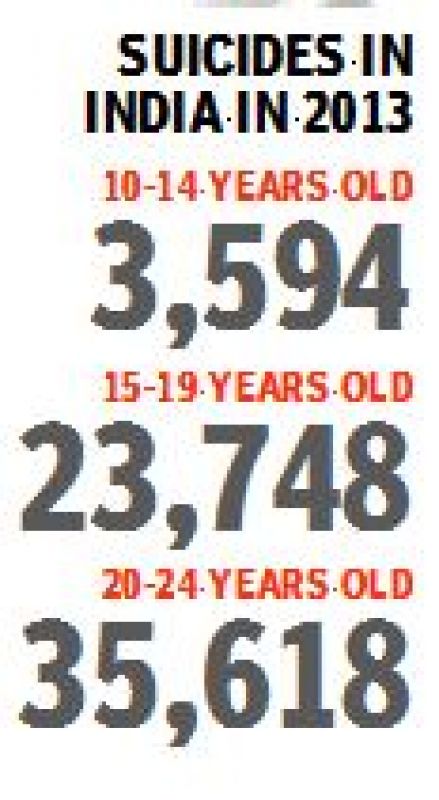 But many have long held the opposite perception. “The world cannot be made suicide-proof. It is not a great idea and can prove to be just a miniscule help. Suicide is an impulsive act. It depends more on determination than the means,” said Dr Rajiv Mehta, consultant, Sir Ganga Ram Hospital in New Delhi.

Dr Mehta said that while such means could be adopted, schools and coaching centres had to employ counsellors. “Suicide can be a very impulsive act, especially among the young, and therefore difficult to predict. If we really wish to stop them from committing suicides… there should be centres and open forums where students could speak their hearts out to counsellors,” he said.

“We have to curb the reason. Rather than looking at the branch of the tree, we have to go to the root,” added Dr Mehta.

A Bengaluru college student, Hardik Chawla, said that “means restriction” was only the first step and a lot more was needed to be done. “You can easily find methods to commit suicide on websites. It is important to put a restriction on such websites too,” he says.

Meena Grover, 60, whose son committed suicide when he was 16, welcomes the move. “At least there is something being done to curb suicides. My son could have been alive if lethal insecticides were not available in the market so easily,” she says.

Researchers say that suicide death rates among young men in India are higher than that of the developed nations by two times. A young Indian woman is six times more likely to kill herself compared to a young woman in higher income countries.

Light rains in Nellore, Chittoor as depression in Bay