Vizag MP K. Haribabu, MLC M.V.V.S. Murthi display the ink mark on their fingers after casting their vote at the Graduates MLC polls in Visakhapatnam on Thursday.

Visakhapatnam: Polling for the north Andhra Graduates constituency passed off peacefully. Voting has increased unprecedentedly this time compared to last polls held in 2011. While the voting percentage was 47.12 pc in 2011, it had surged to 69.70 by 4 pm in the three districts of north Andhra. About 61.81 pc of voting was witnessed in Vizag, 59.50 pc in Vizianagaram and 60.07 pc in Srikakulam district. 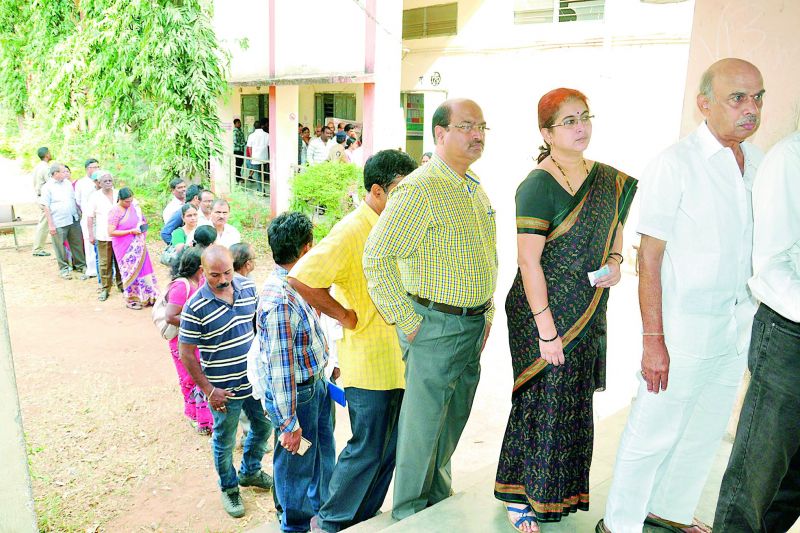 eople stand in a queue to cast their vote for Graduates’ MLC polls at VS Krishna College in Vizag on Thursday.

At a few poling stations,  voters, including Bobbili MLA R.V.S.K. Ranga Rao,  complained of not being able to find their names in the list.Vizag MP K. Haribabu and others exercised their franchise. HD minister, Ganta Srinivas Rao was seen at one of the poll camps organised by the TD to issue vote slips.Voting was held in 134 poll booths in Vizag. The district collector and election returning officer, Praveen Kumar was seen visiting various poll stations.