New Delhi: The Central government on Tuesday took serious note of the videos shot by Border Security Force (BSF) constable Tej Bahadur Yadav, who alleged that troops were served bad quality food and even had to starve on some days.

After posting the videos, the constable has been shifted from the Line of Control to the headquarters of his 29 battalion in Poonch.

Taking cognisance of Yadav's complaints, Minister of State for Home Kiren Rijiju tweeted, “Welfare of our security forces absolute priority. Any anomaly to be dealt with firmly.”

However, he added that he had found a “high-level of satisfaction” among the jawans during his visits to the border. 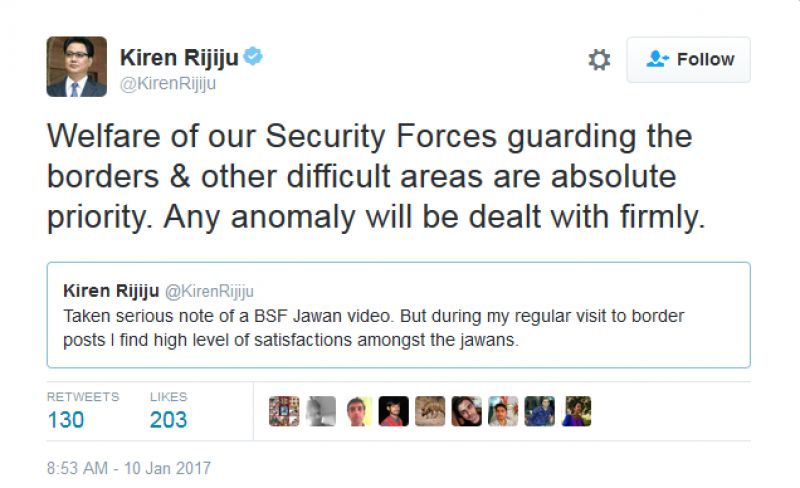 Home Minister Rajnath Singh also tweeted on Monday night, saying he had seen the videos and that he has sought a report from the BSF to ‘take appropriate action’.

“We only get a ‘parantha’ and tea as breakfast and this is without any pickle or vegetables... we slog for 11 hours and at times we have to stand throughout the duty hours. For lunch, we get ‘dal’ (pulses) which only has ‘haldi’ (turmeric) and salt... with roti. This is the quality of the food we get... how can a jawan do his duty?” Yadav had said in the 3 videos.

“I request the Prime Minister to get this probed... no one shows our plight,” Yadav alleged.

He said he "may not be here" hinting action might be taken against him and urged people to take the issue forward so that corrective action is taken.

He further alleged that at times jawans have to go to sleep "empty stomach".

The videos shot by the constable deployed along the Indo-Pakistan border in Jammu and Kashmir have prompted the BSF to initiate an inquiry after the allegations sparked outrage. However, officials added that Yadav’s record in the BSF was poor, with constant absenteeism, chronic alcoholism and rudeness towards seniors the particular programmes.

It was a tough battle, but we fought it well: K K Shailaja on COVID-19 outbreak

Ahead of Budget Session, Rajya Sabha releases Code of Conduct for members