Garbage in, stays in, rarely out

Thank you Deccan Chronicle for publishing my letter with photo, ‘drainage-water over flowing on road near Khairatabad Hanuman Temple’ on November 25. GHMC responded to the grievance. The area has been cleaned the manhole has been replaced. The drain-water flow has stopped.

Centralised bus terminal needed at Secunderabad station
The area around Secunderabad railway station is scattered with city buses stationed at various far off terminals. It is high time RTC finds a convenient place close to the railway station, and turn it into a convenient interchange point for rail, road and Metro commuters. The vast railway land opposite the Bhoiguda entrance at Chilkalguda crossroads may fit into the requirements. It is high time RTC and Railways coordinate with each other, in public interest, and make plans to build a World-class centralised bus terminal. It would be an excellent project that could benefit scores of citizens.
— P. Vasudeva Rao Boudhnagar

Air pollution killing Malkajgiri residents
It is very disheartening to note the severe air pollution that the residents of Malkajgiri, particularly Yadavnagar,  Madhusudhannagar and Sanjeevnagar have to live with. The foul smell emanating early in the morning or sometimes in the evening makes it unable to breathe for the residents. The uneasiness and consequences of the foul smell is having a huge impact on the health of the residents. Though the residents are telephonically complaining to the Pollution Control Board,  the solution is nowhere to be seen. The government should take stern measures to stop the air pollution.
— P.R. Ravinder Malkajgiri 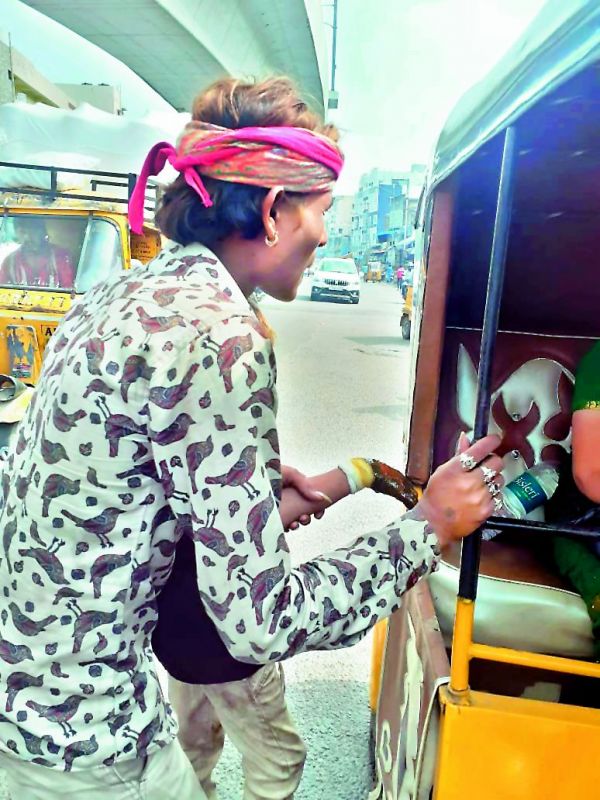 Some of them wear fake bandages and act like their hands are burnt. This has become a routine and I am surprised why these beggars are left unnoticed by the authorities.

We need a Hyderabad free of beggars. I request police to take strict action into the issue.e.
— Syed S. Irfan Malakpet

DC IMPACT: Drainage cleaned
Thank you Deccan Chronicle for publishing my letter with photo, ‘drainage-water over flowing on road near Khairatabad Hanuman Temple’ on November 25. GHMC responded to the grievance. The area has been cleaned the manhole has been replaced. The  drain-water flow has stopped.
— Vivian Ram, Vikas Raj K.N. Kacheguda

Accidents a new norm in Secunderabad
Accidents have become commonplace in Secunderabad of late. Commuters are violating traffic rules and accidents are caused. Adding to the woes is the parking of vehicles by the roads. Reckless driving is the bigger issue. It involves traffic violation in which a driver displays complete disregard for signs and signals. This is a common cause of car accidents, and, because it usually involves high speeds or extremely dangerous driving practices, it often results in injury or death of one or more people involved.  The truth of the matter is that accidents caused by reckless driving can always be prevented. With awareness about the causes of accidents in such accidents, commuters can keep themselves — and the fellow commuters on the road — safe.
— Syed Shamsuddin  Maghrabi, Red Hills 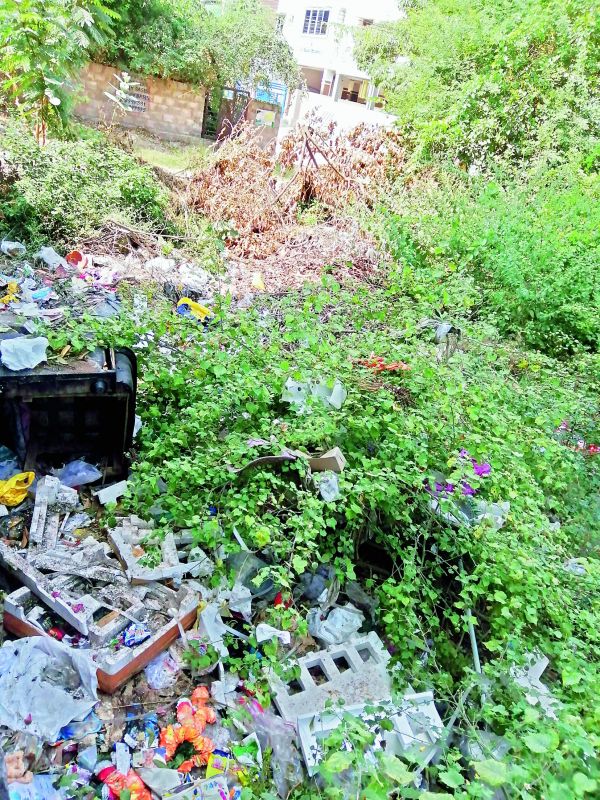 Pathetic situation at Lad Bazaar
It is saddening to see the very busy Lad Bazaar in a pathetic condition. Despite the fact that the locality is known to be busy with tourists and regular visitors, civic authorities continue to ignore the issues faced by local businessmen and citizens. Flow of drain-water on the main road has been a problem since times immemorial.
— Md Sadiq Khan

Garbage burning in school
This picture was taken in a school on Pipeline Road in Jeedimetla. Every day, the school burns garbage in its premises despite several complaints. Often, plastic is also burnt. It makes me think how a school, where the next generation is being taught about saving the environment, could commit such offences.
— Sonia Sappal Hyderabad

Two traffic challans for same violation
My vehicle bearing no. TS11EQ4099 has been issued two traffic challans within 11 minutes at Chaderghat for the same violation. I have lodged a complaint on the Hyderabad Traffic Police app on December 1 asking for cancellation of the second challan. Yet, no action has been taken so far. I request traffic police authorities to do the needful at the earliest.
— Syed Salahuddin Malakpet

Restore BSNL glory
The services of BSNL is going from bad to worse, ever since government announced some measures to revive. My land line and wi-fi is not functional(040-27113326). Complaints receive only stereo type answers or not attended at all. Will the authorities bring back the glory of excellent customer services of the early 80s?
— Wg. Cdr. V. Sundaresan (Retd) 21, Sainik Enclave, Sainikpuri

Thanks DC, it worked!
I thank DC for publishing my article in Speak Out on December on the mosquito menace at  Barkatpura. The GHMC staff responded on the same day and did fogging in the locality. I also thank the GHMC for taking immediate action and request to do fogging once a week as Barkatpura is a green belt and has many mosquitoes.
— T. Kailash Ditya Barkatpura

Pollution from Uppal factories
Of late, we have been facing the issue of stink emanating from the factories in Uppal. Emissions from the factories, which are released in the evenings, are causing burning sensation in the eyes while silver, brass and copper articles are turning into rainbow colours. I request the authorities to look into the matter and take action.
— Sulochana Gopu Saraswathi Colony, Uppal

Maintain one-way at Railway Degree College service road
The one-way service road near Railway Degree College was created to make it easy for vehiclists from and to Sitaphalmandi to join the Mettuguda road. However, this service road is being used as a two-way thereby slowing down the motorists for whom the road is originally meant. To overcome this menace, the traffic police has set up traffic cameras near the Railway Degree College but this has not deterred road users who continue to violate the one-way rule. At times, to prevent traffic jams, especially during the peak hours, traffic police personnel are posted at the entrance of the road on the Mettuguda side, They take photographs of the violators’ vehicles but the motorists seem unfazed..
— P. Venkat Rao Vijaypuri Colony, Tarnaka

Open plot turns garbage dump
The open plot No. 90 adjacent to Daffodils Apartments at plot  No. 89, Netajinagar, Road No. 2, has been turned into garbage yard. I have lodged my grievances through the GHMC portal and I received a message that it would be resolved within 24 hours. After a day or two, another auto message is sent that it is resolved. The last grievance was lodged on November 24 and the same is repeated.  I once again appeal to the GHMC authorities to clear the garbage and cost may be added to owner’s property tax as they have failed to maintain their open plot. The Netajinagar Residents Association has not come forward to help as well.
— N. Nagarajan Daffodils Apartments, Netajinagar, Kapra, ECIL Post

Manhole silt not cleared
A manhole was cle-aned on the Mushe-erabad main road, opposite Sri Sai Raja Theatre A1 Cafe lane. The silt gives off a foul smell. It is also affecting the traffic. This is very common from the HMWS&SB, they never clear the silt. Further, hotels should connect their drainage to the main line. But this cafe has connected their drainage line to the residential line and that too in the opposite direction. This is causing problems for the public.
— Mohd Ghazi Sharief Hyderabad

Dumping in Shapurnagar prime cause of congestion
This is a picture of cartons thrown beside the road, opposite MPR complex in Shapurnagar. Owners of electronics stores in the locality are dumping the cartons, leading to congestion on the road and inconvenience for parking. I request to GHMC officials to take action in this issue at the earliest.
— Ehsan Raza, Chintal

If BSNL’s billing is bad, customer service is worse
We thank you for your yeoman service in solving people's issues. I request you to kindly publish the following grievance in an upcoming issue of Speak out.

I have a BSNL LL connection with STD barred since 20 years. I don’t even make the minimum number of calls during the billing period. The bill used to be `560 till three   months back. Suddenly it increased Rs 706.

I haven't been receiving bills for six months. I have been paying the bills online. However it gives the bill amount and due date and not the break up of the items.

The phone goes dead from time to time. Customer care and online complaint numbers do not work properly and always go in a loop.

The bill for December hasn’t been received but it shows Rs 1,206 online for less than minimum number of local calls. No details are available as usual. This is nothing but taking the customer for a ride. About a week back the lines were dead for about three days. This is sure sign of manipulation and malpractice and deficiency of service.
— T. Saroja Devi Hyderabad

Remove illegal cell towers
This is to inform the authorities that a mobile tower has been  illegally installed at Rahmathnagar,  Masjid-gadda, in Yousufguda, a thickly populated area, defying all the norms. We the locals face the danger of health hazards  due to radio waves propagating from the cell towers. The road stretching from Sai Baba temple to Urwah model school has nearly 10 towers installed. We therefore request that the tower be removed in order to prevent further damage to health of people of the area
— Mohammed Rahmathnagar, Yousufguda

Stop heavy vehicles on flyovers at night
Heavy vehicles using the flyovers has become a regular routine. The trucks and lorries are causing damage to the structure of the flyovers as well as endangering the lives of people driving behind them. If some  mishap happens and the vehicle breaks down due to  some unforeseen reasons then the traffic will be jammed for a long time. I request you to kindly take this issue to the department concerned. One never knows, this mail of mine could save some lives.
— Gumedelly V. Raajashekar Hyderabad

Third wave of the pandemic can be handled if stringent steps taken on time: Govt