Statues have never been far removed from politics. Whoever built them had to answer the people about the need for spending so much public money. And if the political climate changed, the statues may even get relegated to warehouses as new champions of the people emerge.

The gigantic Statue of Unity, the world's tallest, was built to honour Sardar Patel, India's first Home Minister. At around an estimated Rs 3,000 crore it did cost a pretty penny, but it stands tall to preserve for posterity national respect for a strongman who shaped independent India's map.

The cost of building the statue set off an engaging debate on priorities and whether a developing nation could be so ambitious as to possess the biggest and the tallest, etc. But it does give a fillip to tourism much as Indians sail to the Statue of Liberty from Manhattan and pay obeisance to the spirit of freedom. Curiously, India's greatest archeological symbol of grandeur in the Taj Mahal, a monument that is an ode to love, is being downgraded now by the UP government. But no one disputes that it took imagination to conceive of such beauty and build it though one could take exception to the treatment meted out to some of the talented artisans. Those were different times. 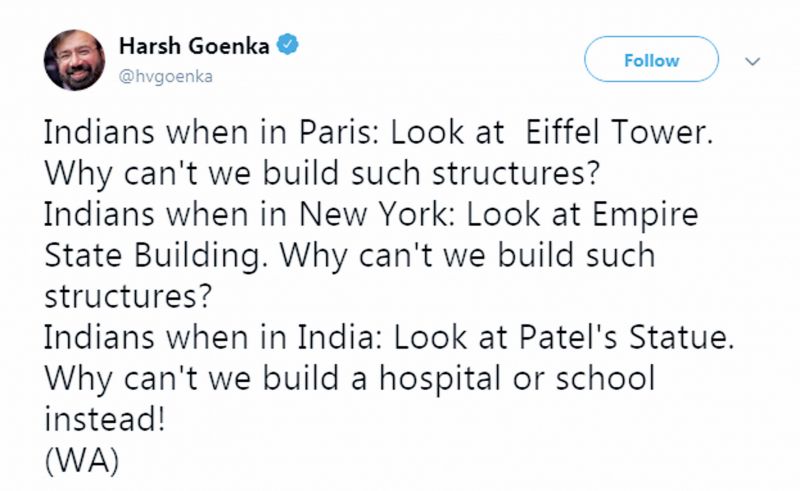 A grandiloquent gesture like a giant statue is not to be pilloried only on what it cost. If feeding the poor is the only national priority, India would not have sent a Mangalyaan into space nor conquered so many frontiers in science and technology. If the politics is removed from national ambitions, then it becomes possible to take a sensible view of grand projects.

Farhan Akhtar@FarOutAkhtar
It's a false equivalence. Both the Eiffel tower and Empire State Building were built by individuals using private funds. The statue has been built using public money. Here endeth the discussion

Padmaja@pretty padmaja
So what ? TajMahal costed Rs  41,828,427 in 17th Century. Origin of money - Provided by Royal Treasury of the Emperor, Treasury of Govt of Agra Province. In all, it would be 466.55 kg of gold drawn from the royal treasury. Workers were forced on the job & later made invalid.Think

Aashna@suriaashna
Many ppl are dying daily due to lack of basic necessities.. Rather than putting money to help them.. using them in making Statue.  We need to set our priorities & for India this statue cant b a priority as the basic infrastucture needs much more attention & money.

Manoj-Secular@True_secular
Then ? so what... do you think statue is a sign of " development " country where people are struggling for food & other basics.. this is hypocrisy

Jaya Dasgupta@apurrupa
How about you build an amazing hospital honoring Sardar Patel? Name it after him. Have a portrait of his at the entrance, if you will. Don't you think that's a better way to honor his memory?

Subhojit Dhar@SubhojitDhar
When u build a road or a bridge, u don't count how much u get from toll tax. Similarly, here it's not how much u earn from entry tickets. It's how many, chai walas, pakoda wala, feri walas, nariyal pani walas, dhabas, drivers, tour guides etc will find employment.

KAMAL MIGLANI @KKMIGLANI
You have very wrongly raised the issue of using public money for building a statue in India. May I remind you of the Indian Muslims wasting tax payers money for their personal visits to Haj.This is a wastage & not building of a statue in public interest but you won't say this.

Suraj@surajlt92
To all those Mahapurush who ask wt is need of STATUE OF UNITY - Till now 2,78,169 people have visited the #StatueOfUnity site. Thus, generating a total revenue of Rs. 6,45,59,283. This is only frm Official ticket sales. Add much more from food, accommodation and other
expenditure

Simhachala@Arya_777
Sir first of all Statue of Liberty was not built on American tax payers money, it was a gift from France. Empire State Building is a Trade Centre which generates huge revenue and taxes. What's that to compare with statue in our nation?

Seema Trivedi@SeemaTrivedi6
Wrong.They were built using public funds. Moreover every great nation must invest in building its legacy for future generations to remember or marvel. I often wonder what do you keep thinking all the time. So much negative crap in you. Do you even take pride in India?

Sunny Savant@sunnysavant2015
Why don't you include Nehru memorial, Rajiv Gandhi and Indira Gandhi's samadhi here??? That too made out of public's money, which all cost more than statue of unity!! Seems you might be following #rahulbaba

Vikram Ghanekar@ vikramghanekar
Taj Mahal was built by an emperor who cared 2 hoots about general population. Same as the situation today. I fully agree with you.

RAGING BULL@aarkay2015
400 acres of 'public land' worth almost 1 lakh Crore is used for memorials of just 3 individuals in Delhi. Why don't we sell this and bridge our fiscal deficit?