They have been admitted to the Sarojini Devi Eye Hospital.

Hyderabad: Thirty-one people reported to Sarojini Devi Eye Hospital with injuries to the eyes due to the bursting of firecrackers. Eight of those injured were critical.

People started coming to the hospital from Wednesday afternoon and till early Thursday morning. They were mostly from Hyderabad city and Ranga Reddy areas. 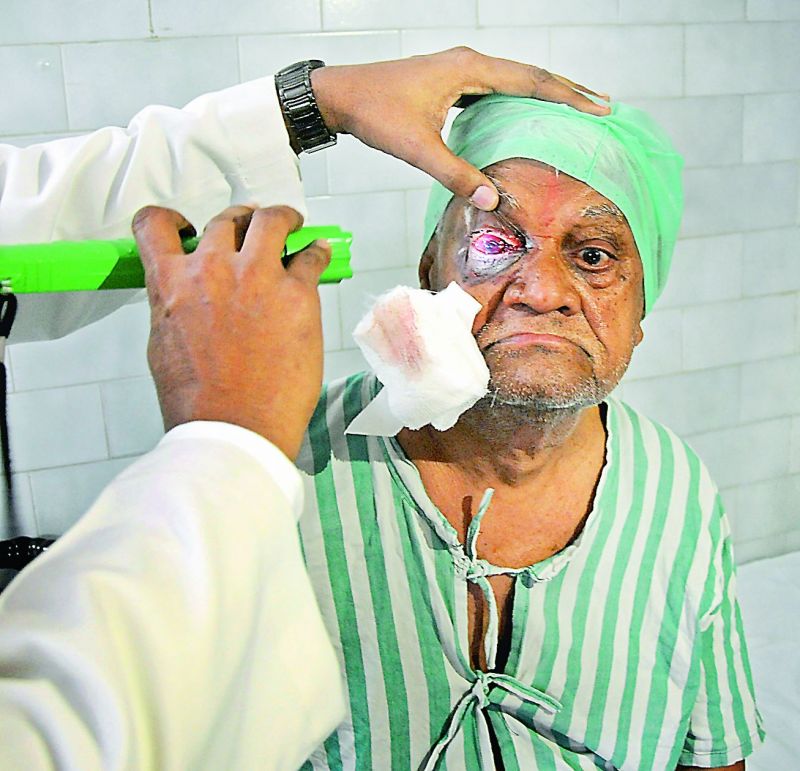 Other private eye clinics in the city administered to three or four cases of injury which were treated on out-patient basis.

Dr Srinivas Prasad, senior eye surgeon at Sarojini Devi, said “six are in-patients as their injuries are grievous and required surgical intervention. One of them has a critical injury to the cornea and has been put on medication and observation.”

Two of those admitted to the hospital are children.  The other 23 were treated and sent home but have been told to come for a check up every day.
Firecrackers burst during the Diwali festival can be dangerous if not handled properly, a warning that many people disregard.

“The city police received complaints on the bursting of fire crackers beyond the permitted houses, between 8 pm and 10 pm, for which cases were booked under Sections 22 and 77 of Hyderabad City Police Act on the intervening night of Diwali festival on November 7 and 8,” police commissioner Anjani Kumar said.

People showed little respect for the order of the courts and the firecrackers were burst from as early as 5 am to well past midnight.
There appeared to be no fear of a police complaint or legal action.

“The calls on Dial 100 were received more between 10 pm and 11 pm on Wednesday. The calls were regarding noise pollution and bursting of crackers. Police personnel were asked to visit the spot and review the situation,” said sources.

A senior police official from the city said, “Some complaints were received regarding the violation of the SC guidelines.  The complaints will be reviewed for further action based on the severity of the incident.”

The Cyberabad and Rachakonda police said no complaints had been received on the violations of the Supreme Court guidelines.

Fire dept. gets 42 fire accident calls
The fire department got 42 calls on Wednesday, most of them for incidents related to the bursting of fire crackers.

Early Thursday morning, at around 3 am, a fire broke out in a timber depot near Bowenpally check post. Fire officer Durga Prasad said the wood stored in the depot could have caught fire due to firecrackers. It took 4 fire engines almost 4 hours to douse the fire. T.V. Rao, owner of the timber depot valued the wood that was gutted at `2 crore and `50 lakh damage to the premises.

On Wednesday around 6.30 pm a small fire occurred in Malkajgiri. Police have booked a case against a grocery shop owner who opened a stall selling crackers in front of his grocery store without taking prior permission from the concerned authorities. According to Malkajgiri sub inspector of police L. Ramesh, the grocery shop owner N. Venkatesh had arranged the crackers in an open space in front of his shop. The crackers caught fire accidentally and went off in all directions, creating panic in the vicinity. Fortunately there were no casualties.

Firecrackers also ignited the cotton waste stored in a cycle shop in Shamirpet. Abdul Razak, sub inspector of police said, “The owner of the shop Shravan Kumar received simple injuries on his left knee and left hand and cycle tyres got burnt. Children were bursting firecrackers and accidently they fell on the cotton waste and a fire broke out in the shop at around 7 pm on Wednesday.”

PM Modi to raise concerns on Afghanistan at SCO summit

India may set up a rocket force: Chief of Defence Staff