A cashier holds bundles of Indian currency notes at a bank in Allahabad. (Photo: AP)

New Delhi: In a major crackdown on black money, the government on Tuesday scrapped Rs 1,000 and Rs 500 notes, a surprise move that experts say could slow down economic activities over the next 6-8 months but things would become normal after a year.

While making the announcement in a late evening televised address, Prime Minister Narendra Modi said a window would be provided to exchange scrapped notes till December. He also announced that a new series Rs 500 and Rs 2,000 notes would be introduced soon.

Property prices could crash, adding to the woes of the real estate sector which is already reeling under slowdown, said Sudhir Malik, a chartered accountant, while commenting on the government’s action. 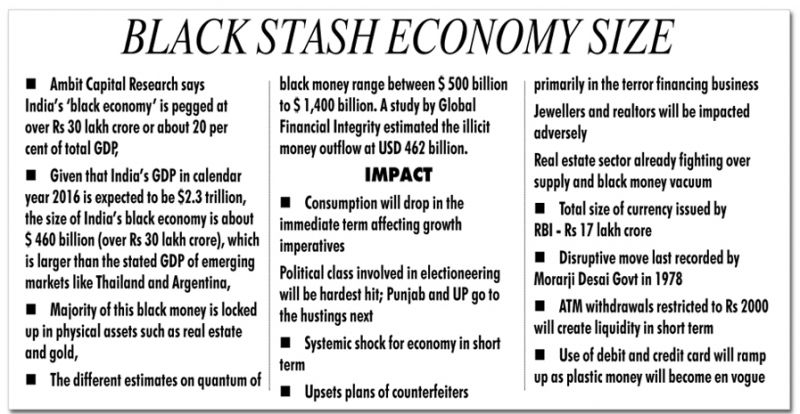 Gold sales could also get impacted. However, the impact on the yellow metal could be relatively lesser compared to property, Malik said. “Consumers will have to pay more as the scope of making cash transactions to avoid paying taxes will vanish. Economy will be sluggish over next 6-8 but eventually things would become normal after a year,” Malik added.

Explaining the rationale behind the government’s action, economic affairs secretary Shaktikanta Das told media persons that while the nominal GDP grew by 30 per cent between 2011 and 2016, circulation of Rs 500 and Rs 1000 notes increased more than 40 per cent and 100 per cent respectively.

Deepak Parekh, chairman, HDFC Bank, termed the move a bold one ahead of UP and Punjab elections that would impact the political class more than the industry and public.

“This action will help in curbing fake currency and black money in the economy while inconveniencing general public in the short run but this is worth a long-term gain,” said Devendra Pant, chief economist, India Ratings and Research.

Former cabinet secretary BK Chaturvedi concurred that the move would go a long way in curbing circulation of black money but expressed fear that it would make a return with the new currency soon.

Giving a different take to the government move, RK Arora, chairman Supertech said that the real estate sector will now get liquidity as people will deposit their unaccounted money in banks. "It should create the desired liquidity in the market that would help the sector double its growth. Moreover, higher returns given by the sector will prompt people to put this money here, especially at a time when property prices are at its lowest," he added.

(This story originally appeared in the Financial Chronicle)