Hygiene goes for a toss in Aswachch Hyderabad

Animals resting on the road

Remove stray animals on road in Anandbagh
It has become very difficult to drive on the road, especially while taking turns, near Anadhbagh, in Malkajgiri. Animals are resting on the road since days but no one takes action. It is risking the lives of motorists and creating severe traffic bottlenecks.
— Rajiv Raj Anandbagh, Malkajgiri 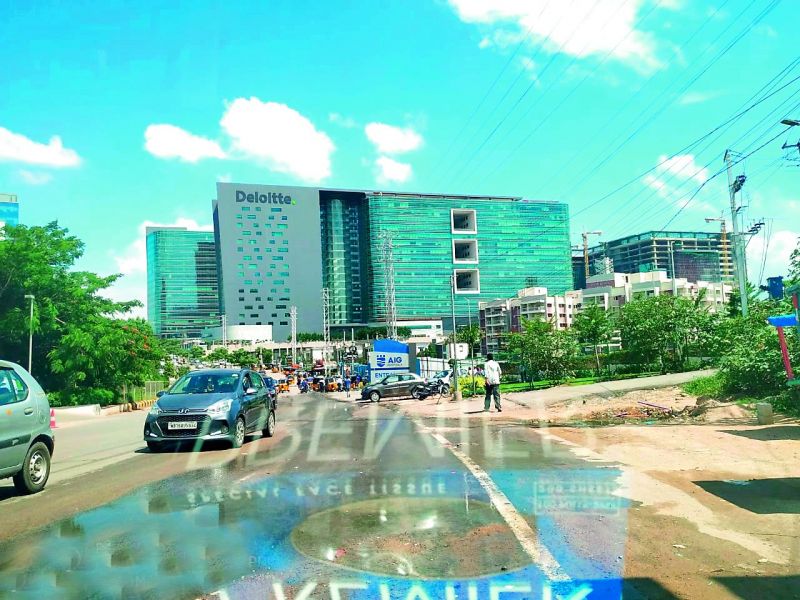 Drainage and mosquito menace in Gachibowli
There are three manholes overflowing from between the Tata-AIG Hospital towards Deloitte Towers, in Gachibowli. Foul smell, drain water overflowing on to the street, breeding of mosquitoes, and other health hazards have become a common problem of all residents and employees who are forced to walk over sewerage. We request the authorities to help us out of this menace at the earliest.
— Syeda Sara, Gachibowli 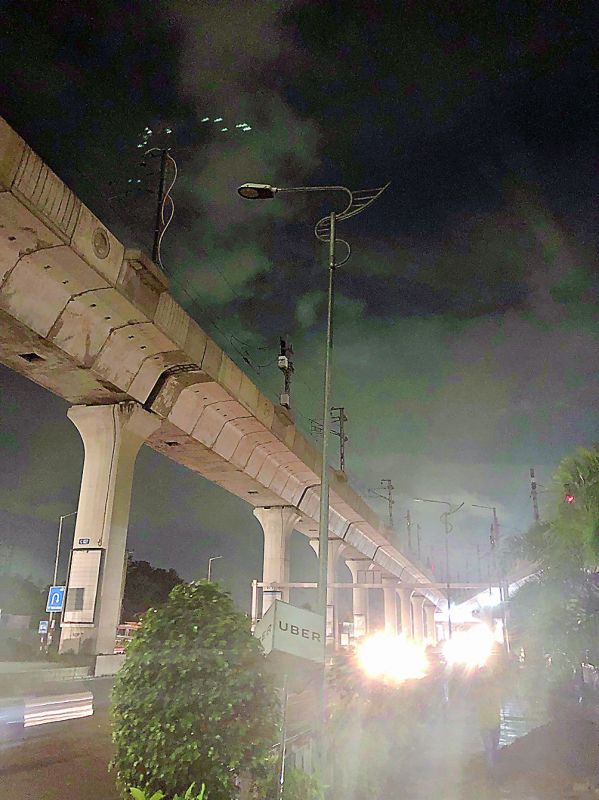 Streetlights between KPHB and JNTU not working
This issue pertains to streetlights on the main road (on both sides) between the KPHB and JNTU metro stations. The lights between these two metro stations are not working for several days. But when we complain, both the GHMC and Hyderabad Metro Rail officials shift the blame on to each other. Hence, I am requesting the MA&UD officials to help us figure out on whom the onus lies and get cracking to make these lights work.
— Srinivas Bellam, Kukatpally 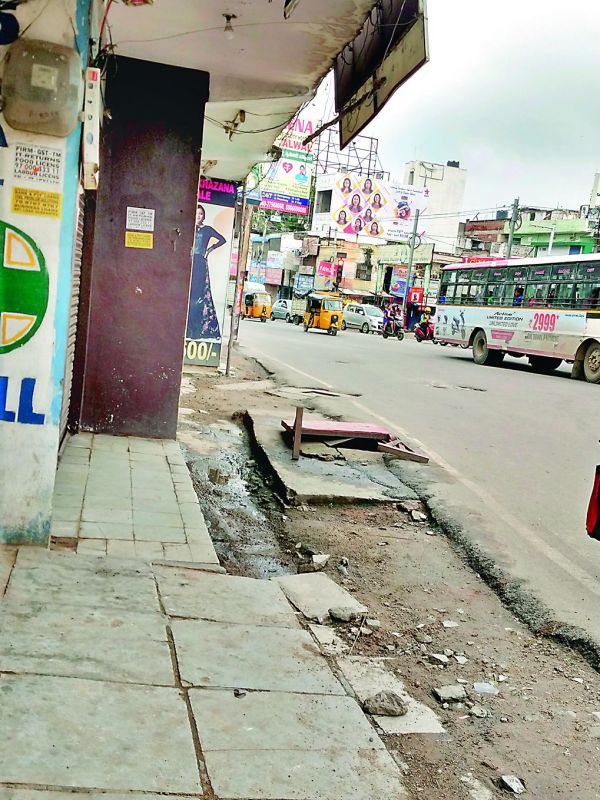 Open drain hole at Lothkunta
I  would like to draw the attention of the Secunderabad Cantonment Board to the drainage hole in our locality which has not been repaired and covered since a long time. It is causing a lot of problems for commuters at Lothkunta, near the Ambedkar statue, in front of the Srinivasa shopping centre. The daily commuters have to face inconvenience while walking on the road.
— Ravi Kumar, Lothkunta 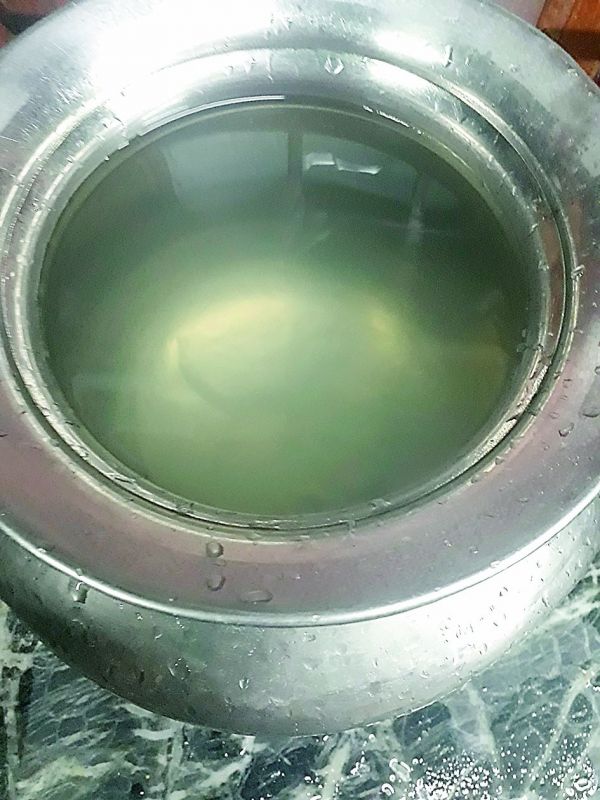 Dirty water at Malakpet
As a resident of Akberbagh, Malakpet, I share our collective civic angst of our area. Since the last 15 days, the drinking water supplied by the government is very dirty and unfit for human consumption. Is this the water our government expects us to drink?
— Multazim Syed Habeeb, Malakpet 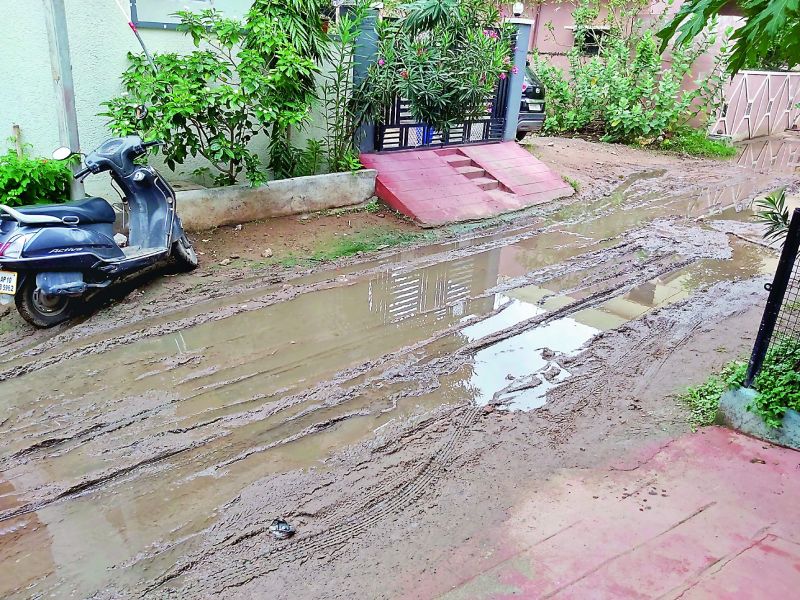 Dug up road left uncarpeted, fills with sewage at Neredmet
The road in front of our house at Road 9, Rambrahma Nagar, Old Neredmet, has been in bad shape for months now. We, the colony residents, have spent thousands of rupees in getting it cleaned ourselves. The road was dug up for the laying of water pipelines three years ago. The promised re-carpeting has not been done. After every rain, sewage from upper lying areas flows into the dug up area and stagnates there. The stagnant sewage becomes a breeding ground for mosquitoes. When we complain, GHMC officials say they have sent a proposal and are waiting for approval.
— Sekhar Doddi Rambrahma Nagar, Old Neredmet 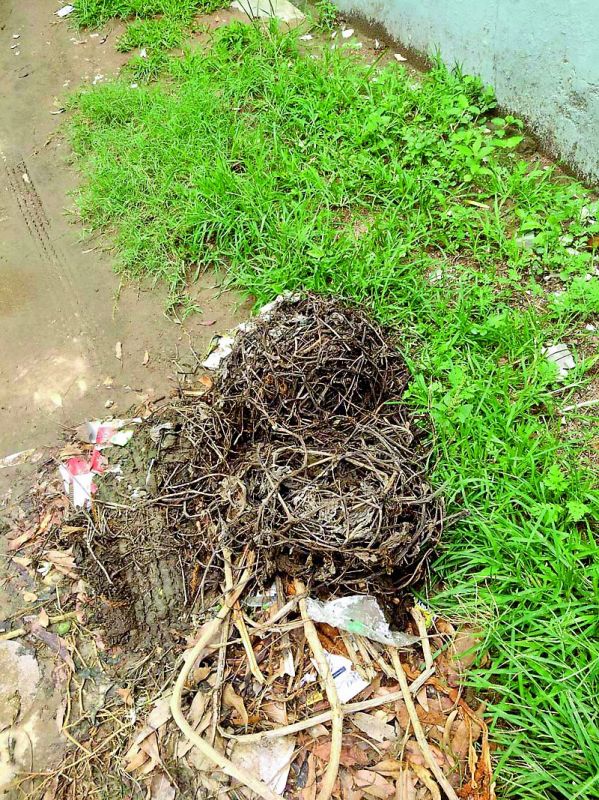 GHMC not clearing garbage in Uppal
In Kalyanpuri Colony, Uppal, Street No.16, GHMC contract workers are not clearing garbage which is being left on the roadsides after the sweeping of roads. Due to rains, the garbage is becoming wet and spreading on to the roads. It traps water and becomes a breeding ground for mosquitoes.   I request authorities to act at the earliest.
— S. Sudhakar Rao, Street No 16, Kalyanpuri Colony

Big pothole turns into death trap in Chandanagar
A  big pothole in the middle of road in Annapurna Enclave, Chandanagar, has turned into a potential death trap for passersby and motorists. This despite the fact that the GHMC Chandanagar circle office is just a stone’s throw away from this spot. Many accidents have taken place here but this does not wake up the corporation’s officials from their stupor. All complaints posted to the GHMC online  have been unattended to for years.
— S. Murali Sudhakar, Senior citizen, Chandanagar

Highway blockades making commute hell at Kukatpally
We, the residents of Sumitra Nagar, Bagh-e-Ameeri and Vivekananda Nagar Colony, under the Kukatpally GHMC limits, are facing lot of difficulties in accessing highways as connecting roads are often congested because of road closures along the road divider at Vivekanana Nagar Colony, by the traffic police. After failing to check encroachments, they are now promoting junction blockades which is resulting in frequent traffic jams, abnormal flow and unpleasant roads, which are in an utter state of neglect. We wish to draw your attention to all this and seek necessary action from the traffic police.
— Shaik Mohammed Mujeeb, Vivekananda Nagar Colony

Dog menace at railway stations
The presence of stray dogs has become a regular feature at every railway station. The problem is particularly exacerbated in the Falaknuma to Secunderabad zone. There is no mechanism to remove these stray dogs. I request the concerned authorities to keep stations free from stray dogs.
— Syed Mubashir Mehdi, Chanchalguda 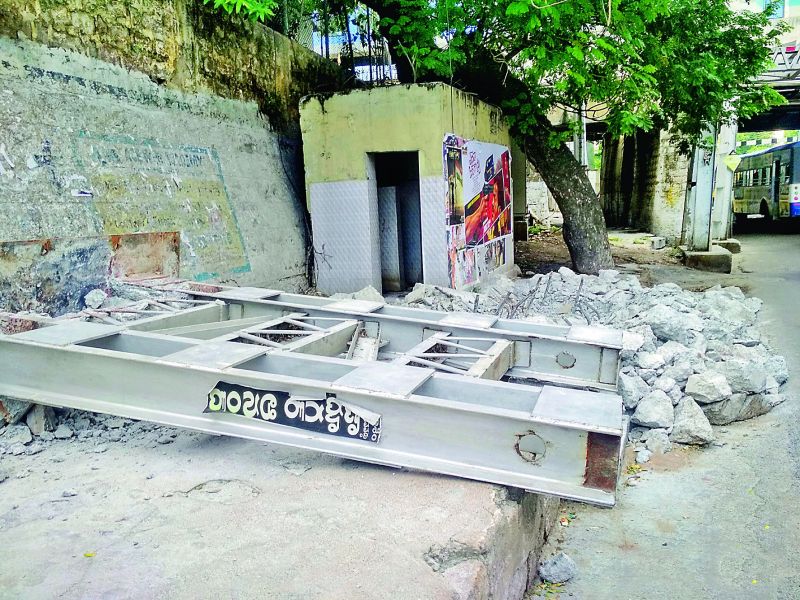 Bible House footpath occupied by railway structure
This structure has been dumped on to the footpath just behind the Bible House railway bridge. The GHMC says it is railway property and refuses to remove it. The area has become extremely dirty.
— Philip Joshua, Bansilalpet 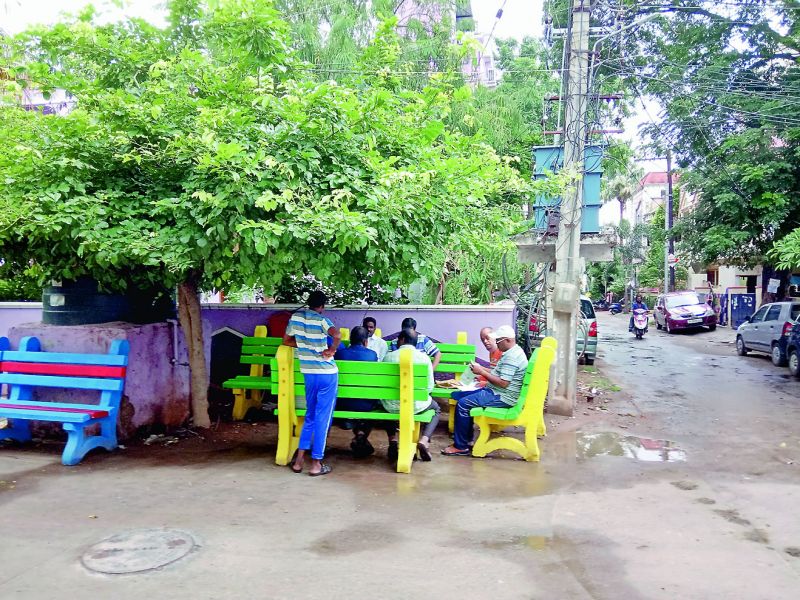 Illegal park benches in Malkajgiri
Park benches have been installed without authorisation in front of my residence by people in the colony as a meeting space. This is causing annoyance to women and children. It is neither a park nor a designated open public space for anyone to install park benches. My family members, especially the women, have to remain indoors at all times, which curtails our freedom and movements both within house premises and beyond. I am praying to authorities to immediately act and have these removed.
— Khan Madhusudan Nagar, Malkajgiri 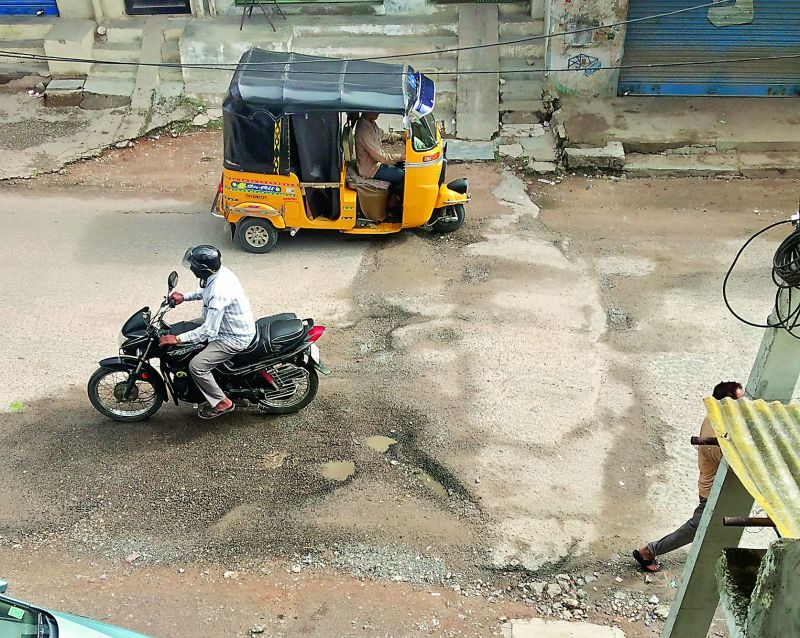 Bad roads at Borabanda Main Road
The roads in Borabanda area are in very bad condition. The surfaces of the roads have been broken since the rainy season started. We request GHMC authorities to repair these roads as soon as possible.
— M Mohammed Raheem, Borabanda

Black water for SD Road
The municipal water supply to the SD Road area is contaminated and resembles a cola drink for the first 30 minutes of supply. We are collecting the water in overhead tanks for daily use, and this contaminated water is making people prone to waterborne diseases. We request the attention of the Water Board to rectify the same. Several complaints were lodged earlier too, but no action was taken.
— Sreedevi SD Estates,Yapral

SCB, end this civic affairs apathy
The Secunderabad Cantonment is under the control of the ministry of defence. In areas maintained by the military, whether official or residential, the roads are smooth. In the civilian-occupied areas of the cantonment, civic conditions are distinctly different, characterised by seemingly endless potholes and apathy in all civic matters. We civilians pay taxes to the cantonment, expecting services like road repair, garbage removal, control of animals, maintenance of proper drainage system and pavements for pedestrians. How can the ministry of defence be moved to meaningful action?
— Kamala Menon Cochran 72, Parkview Enclave

Potholed roads of Saipuri Colony
The roads in Saipuri Colony, Malkajgiri, are in a pitiable state with potholes everywhere. When it rains, the water stagnates on the roads, causing problems both for vehicles and pedestrians. The loosely hanging electric cables could come in contact with the stagnant water and electrocute road-users. It has also become a breeding place for mosquitoes. I request the GHMC to repair the roads.
— Uday Kiran Kankipati Saipuri Colony,  Malkajgiri

Rajiv Gandhi Rahadari poorly lit, full of craters
Apropos of the the state highway often referred to as Rajiv Gandhi Rahadari road, which connects Karimnagar and Secunderabad and is most often taken by Chief Minister K. Chandrasekhar Rao to visit his farm house, is poorly lit and full of craters. The recent splash of rain has added to our problems. At pockets near Bolaram, Lothkunta, Docca Stadium and Vasavinagar, this road has no central median streetlights which are utmost important for motorists at night and for safety of women. One feels as if one is entering a dead end with no light.
Why has the road and building department been so lax in even putting up streetlights along this important road connecting Bolaram and other areas to the city? I urge the department to fix central median streetlights immediately before a mishap occurs.
– Deepesh Surana 731, Sadar Bazaar, Bolarum

Ganesha pandals cause traffic jams
A  Ganesha pandal has come up in our colony and is causing obstruction to the smooth flow of vehicles on the main road. How far are we justified in blocking roads for religious festivals and functions? This is nothing but rank indiscipline or thoughtlessness on the part of public. Even parking a motorcycle on the road (in unspecified areas) is not allowed in foreign countries. Ours is the biggest democracy in the world, but when will we become the most disciplined? I am not against any religion. But such functions should be performed without causing inconvenience to the public.
— U.N.Murthy Dhanalakshmi Society, Mahendra Hills

Noise pollution by Ganesha pandals
With due respect to Ganesha devotees, I would like to express my constant suffering due to the noise pollution caused by those taking the idols for immersion, especially at night.  I request devotees to kindly stop playing loud music after 9 pm. Authorities should prohibited celebrants from making such a loud noise which disturbs people in residential colonies.
— Dhiraj Dangoria Nagaram

The Ganesh immersion processions
Starts after 10.30 pm, causing a lot of disturbance to the residential areas as they pass through. Some teams stop at certain points for 15 to 30 minutes and play loud music. This makes it difficult for residents. The immersion teams should not be accompanied by any musical systems at night.
— T. Narayan Swamy Old Bowenpally, Secunerabad

TrueJet flight cancellation horrors
I  had taken a Truejet flight from Chennai to Hyderabad on August 27, which was cancelled for some reason. The airline mishandled the situation. They kept us wait until midnight trying to figure out further course of action. They promised to put us up in a three-star hotel but put us all in a pathetic hotel instead. We were asked to share rooms with other passengers. I was assured of the next flight at 10.10 am next day, which we finally managed to get the fight at 11.10 am.
— Zain Baig, Hyderabad

Dog trouble in DefCol
We shifted to Defence Colony recently. We are shocked to see innumerable dogs roaming on the streets and making the lives of residents miserable. They jump walls, bite rubber products on vehicles, and bark incessantly. The children are scared to move on road as a bunch of dogs is always huddled on the road. Can municipal authorities help us live peacefully?
— Kasturi Rangan, Defence Colony