In Hungund, a Green Revolution is on drip by drip

If hi-tech agriculture can ensure more yield from the bowels of the earth, why not adopt it even if the expertise comes from a foreign land like faraway Israel? That seems to be the new buzzword  among farmers of perpetually drought-stricken Hungund taluk in Bagalkot district, who have  become role models for youth aspiring to make it big in agriculture, by generously borrowing from Israel’s agriculture technology. The country’s first community based drip irrigation project has rekindled hope among farmers who had started assuming that farming is a loss making activity. The Ramthal (Marol)drip irrigation project has overcome the vexed issue of acquiring land to build canals as water is conveyed through a network of pipes buried under the soil. The ambitious project not only saves water and fertiliser, but also increases crop yield preventing migration of youth to urban areas in search of jobs. Vittal Shastri explores the amazing success achieved by the Hungund farmer who has proved that  droughts stand no chance against the best of technology and agricultural practices.

The creases have started vanishing from fifty-two year old farmer Muttanna Benakanadoni’s face in Hungund town after he adopted Israeli technology to reap nearly double the agriculture yield through drip irrigation. The water supplied through the fully automated system has come as a big boon to his family which was regularly devastated by recurring droughts in Bagalkote, the land of three major rivers. Farmers in other places in North Karnataka are reeling under the debt burden due to crop loss but he has made agriculture a lucrative business. He is also free from price fluctuations and the clutches of middlemen after an agro company entered into a contract with him to purchase chilly grown in his entire 16 acres of land. The company will buy back the produce after three months apart from providing him guidance by visiting his field at regular intervals.

Muttappa is one among around six thousand farmers who are reaping a second crop this Kharif season, in 50 villages of Hungund after successful implementation of the ambitious Ramthal (Marol) automated drip irrigation project. The water is supplied through a piped network with requisite pressure suitable for drip irrigation, to each individual farmer. Engineers and agronomists of Israel based company Netafim India Private Ltd and Jalgaon-based Jain Irrigation firms, who have implemented the project, are helping them out in all aspects from sowing to watering of crops. The farmers are also relieved from their power woes as a separate power line has been provided for the sump and pumphouse. 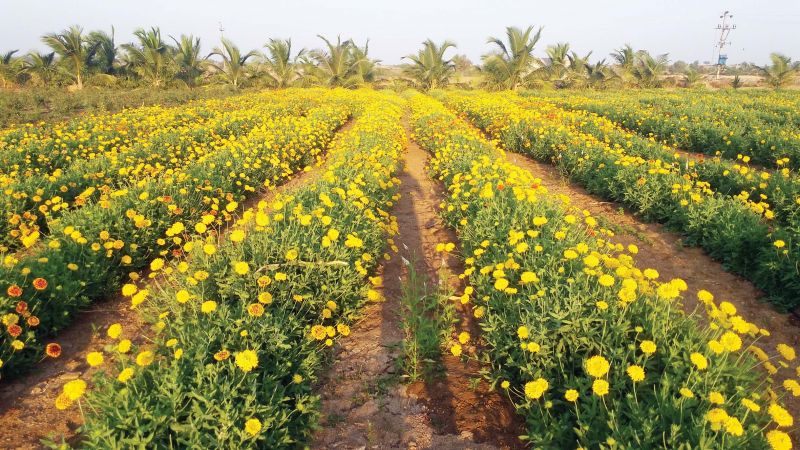 Flowers grown under the project

“We reaped 10 quintals of bengal gram per acre last year instead of the usual five quintals when we depended only on rainfall. Drip irrigation has reduced water consumption and wastage”, a beaming Muttappa Benkanadoni said.

The project area 24,000 hectares is divided into two parts on the west and east side of National Highway-13. The Israeli company has divided the area under its purview, into 23 zones each comprising 500 hectares, where water is supplied through a network of dripper-lines using an automated solar system to ensure its equitable distribution. 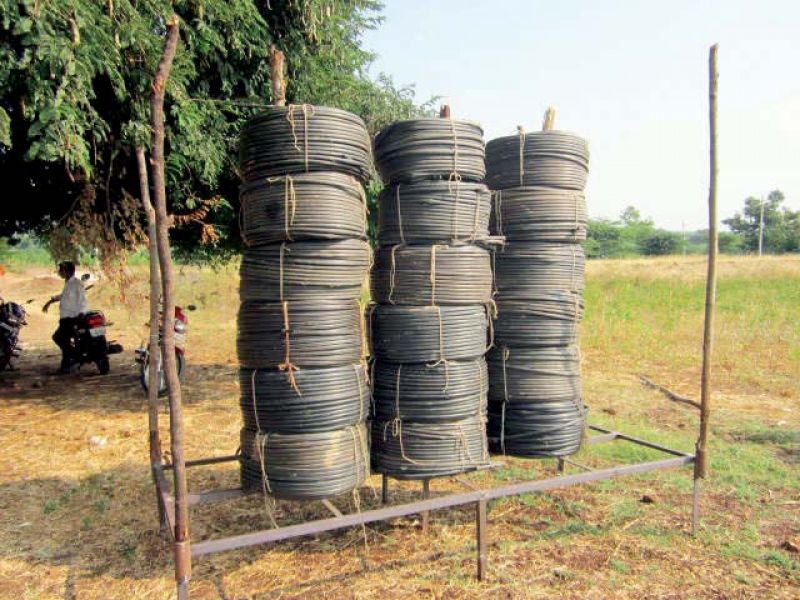 Drip cable to drop water at the root of the plant

The company has also formed water user co-operative societies for each zone to get farmers involved. Office-bearers who are farmers, have been appointed for every zone for operation and maintenance of the water supply network.  Agronomy experts of the company have been visiting the fields to train farmers in crop selection, pest control management, harvesting, storage and packaging of produce.

Plans are afoot to create a corpus fund for each zone to help farmers generate financial resources themselves to meet the expenditure once the company hands over the project to the government after completion of five years of operation and maintenance. “Initially, farmers  opposed us for entering their fields for implementing  the project. Now, they are more receptive to technology after getting a better yield. Many farmers are showing interest in becoming shareholders of the society by contributing Rs 1,351 per acre to the corpus fund which is fixed by Krishna Bhagya Jala Nigam Limited”, agronomist and assistant manager of Netafim India Private Ltd Basavaraj Biradar said.

Many farmers are growing multiple crops to meet the requirement of buyers than rely solely on the market to sell their produce. “I got double the usual yield of sunflower crop in my five acres by adopting drip irrigation. Cultivation of diversified crops such as maize, jowar and onion has helped me avoid losses due to price fluctuations in the market. The project is implemented in the land of more than four hundred farmers as all facilities including drip cables are provided free of cost. This has also prevented migration of farmers from our village to Goa and Mangaluru in search of jobs”, said farmer Parashuram Chalavad of Belagal village in Hungund.

Manual work in the fields has been reduced as farmers supply fertiliser through fertigation by injecting it into the water tank. The water will be supplied to the plant automatically even when farmers are not present.

How does the Hungund project  work?
The water lifted from the backwaters of Narayanapura reservoir is pumped to the site. Later, it is filtered for impurities by setting up filter stations in all 23 primary head control units. All these units have RadioNet wireless transmitters that collect data from remoter terminal units fixed in the fields. The transmitters will inform farmers about the timing of water availability through  SMS.

Farmers everywhere are fast realising that obsolete technology will no longer suffice to reap a bountiful crop from a soil which has been tilled and exploited a thousand times  in the course of centuries.  Finetuning native agricultural practices to bring them on par with hi-tech farming, is the only way we can keep feeding the teeming millions without making them go through the rigours of  price rise or shortages. The Hungund project could surely be replicated across the state and the country to make farming a lucrative profession which makes lives and does not wreck them.  In a country where 70% of rural households rely on agriculture for a living, this could be the harbinger of wealthier times, of overflowing granaries and lush green fields where the kisan greets you with a beaming smile, not  a pathetic look.