Maharashtra Chief Minister Devendra Fadnavis asked Kapil Sharma to give him the details of the case.

Mumbai: After comedy show host Kapil Sharma took a jibe at Prime Minister Narendra Modi on Friday over him having to a "bribe" of Rs 5 lakh to the Brihanmumbai Municipal Corporation (BMC) to get his office made, Chief Minister Devendra Fadnavis reached out to fuming comedian and assured him of the strictest action against the corrupt officials responsible.

Meanwhile, the BMC has requested Sharma to make a formal complaint and tell them the name of the officer who demanded bribe from him.

Earlier today, Sharma, lashed out at Prime Minister Modi on having to pay a "bribe" of Rs 5 lakh to the Bmcto get his office made, asking if this was an example of his "acche din" indeed. 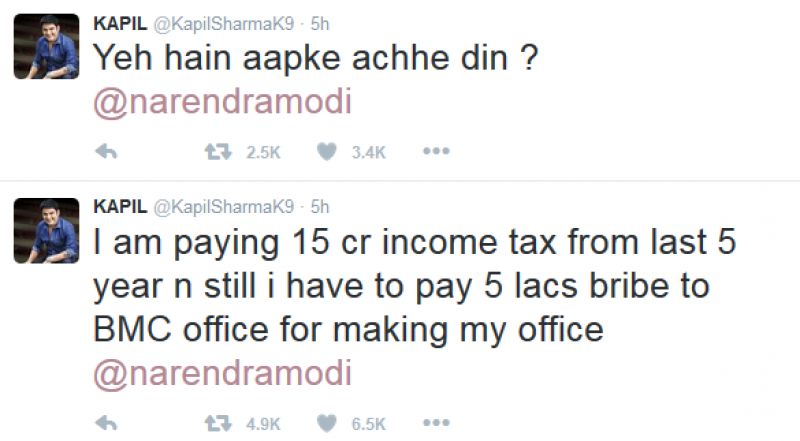 "I am paying 15 cr income tax from last 5 year n still i have to pay 5 lacs bribe to Bmcoffice for making my office @narendramodi. Yeh hain aapke achhe din ? (these are your achhe din?)," Sharma said in a series of tweets.

Kapil Sharma plays host to his famous comedy show 'The Kapil Sharma show' which is graced by mega celebrities.