ABVP members take out a procession in Madikeri on Friday seeking a probe into the suicide of Ganapati.

BENGALURU: The allegations levelled by DySP M.K. Ganapati on television against some senior IPS officers and former Home Minister K. J. George before he took his life, implies he was the subject of a witch hunt.

Mr. Ganapati, who was deputed at Mangaluru IGP's office, had also served as inspector in Bengaluru and Mangaluru. The alleged harassment started, he said, when he was serving in Kadri police station in Mangaluru in 2008. 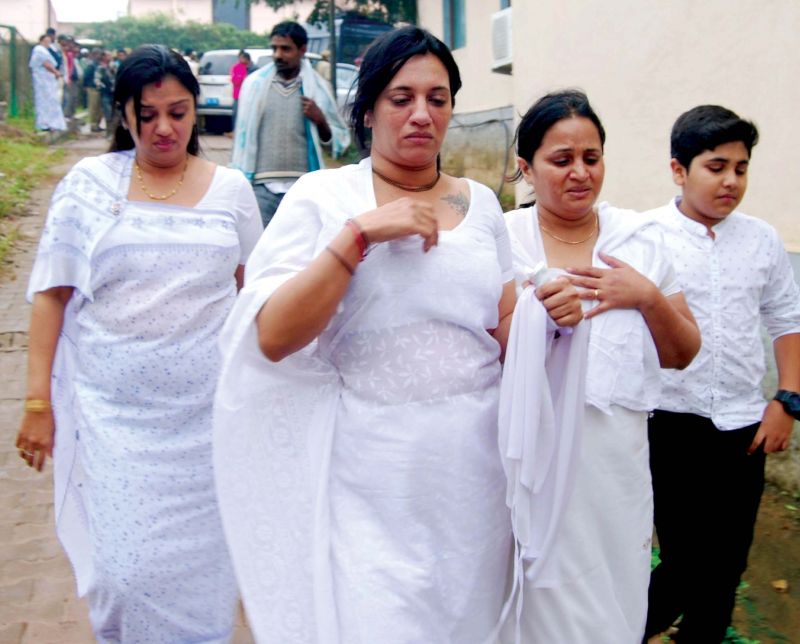 Family members of Ganapati at their house near Madikeri (Photo: KPN)

According to Mr. Ganapati's statement on camera, he had taken appropriate action against those involved in the church attack case. ADGP (Intelligence), Ashit Mohan Prasad, who was then IGP of Western Range had allegedly asked him to drop charges against some of the accused, the cop said. This reportedly led to an ugly tiff between the duo and Mr. Ganapati reportedly lost his cool and raised his voice against his superior officer, Mr. Prasad in that meeting, sources said.

Further, Mr. Ganapathi has alleged in the television recording that Mr. Prasad's son was studying in Mangaluru then and the latter was asking him to do some personal work for him and his son. In more explosive charges, that cannot be substantiated the slain officer alleges on camera that Mr. Prasad was openly demanding money from his subordinates and because he didn't give in, the IGP was furious with him.

When he was transferred to Bengaluru later, Ganapati claims he was harassed over several cases including the encounter of notorious rowdy Prashanth in 2010, when he was serving in Yashwantpur police station. "When I was serving in Madivala and Rajagolanagar, I had face several charges and was also suspended in 2014. By that time, Prasad was the head of the Intelligence wing and he gave all wrong information to the then Home Minister K. J. George, and poisoned his mind against me. George was given the impression that I am a casteist and I was told he tried to spoil my career. I was suspended thrice for no mistake of mine and it resulted in the delay of my  promotion. I was not given appropriate posting and was transferred several times in a year," Mr. Ganapati says in the television recording.  He also made allegations against IGP Pronab Mohanty and alleged that he was targeted by the officer when he was in Madivala station and Mohanty was Joint Commissioner of Police (Crime).

Ganapati’s role in church episode
On a wet and windy morning in September 2008, police officer M K Ganapati displayed extraordinary patience and skillfulness while rounding up miscreants who attacked the car of superintendent of police Satish Kumar outside a church at Kulashekar in Mangaluru.

The three-hour episode at Kulashekar, a day after several churches and prayers halls in Mangaluru and neighbouring areas were vandalized by activists of Bajrang Dal, belied any signs of tension or psychological strain endured by the officer. He asked a posse of policemen to standby and positioned a police van inside the compound of the church to nab the miscreants who tried to escape by mixing with the congregation.

As a mass was underway in the church, Mr Ganapati waited near the van, but had deployed plainclothesmen at all exits of the church. Any man walking out of the church was marched to the police van though everyone pleaded they were innocent. An intervention by church priests or PRO of the local Archdiocese had little impact on Mr Ganapati who employed such pressure tactics till the miscreants stepped out only to be whisked away from the church. Mr Ganapati and Mr Satish Kumar, however, were served notices as part of an  inquiry into complaints of excesses against those who protested a day after the attack on  churches.