Hyderabad: ORR will be a full ring only by August

Work going on at the Kandlakoya stretch of the ORR.

Hyderabad: Work on the Outer Ring Road project that took off in 2008 is finally winding its way to completion. Work on the unfinished portion at Kandlakoya Junction that was slowed down due to legal issues is going on a brisk pace.

Officials expect to open the stretch for traffic from August. Except for the 1.1-km stretch at Kandlakoya of Medchal mandal, the HMDA was able to complete work on 156.9 km of the ORR.

Villagers at Kandlakoya went to court opposing the HMDA’s attempt to acquire 110 acres, putting a speed breaker on the project. The matter went up to the Supreme Court, which recently gave the go-ahead to the metropolitan body, pending final judgement on compensation for the affected locals. The villagers are demanding compensation under Land Acquisition Act. 2013 and the HMDA will follow the apex court judgement on the issue. 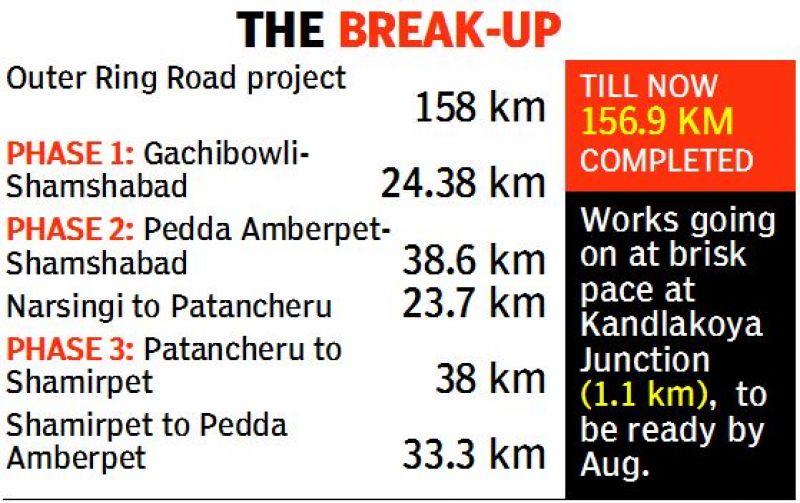 It is learnt that the HMDA has to pay between Rs 125 crore and Rs 150 crore as compensation and another Rs 125 crore to complete the works. The unfinished Kandlakoya junction was posing a problem to commuters travelling on the Ghatkesar-Gachibowli stretch.

The first phase of ORR on Gachibowli-Shamshabad stretch (24.2 km) was completed in 2010. It was constructed in three phases. Although, officials aimed to complete the project in four years it stretched to almost a decade due to various reasons.