Bengaluru: While commuting on ITPB main road was a nightmare because of heavy traffic volume, it has now been compounded by Metro work and lack of streetlights. The construction debris has narrowed down the road at many stretches. In addition, the total lack of streetlights from K.R. Puram railway station to Hoodi poses a grave risk to motorists and pedestrians. Though the residents welcomed the construction of Metro line in their area they felt the authorities should have done planned the construction better to deal with traffic disruption

A long stretch of the ITPB Main Road, which got narrowed down after the construction of metro line began, is a nightmare for motorists and pedestrians due to non-functioning streetlights.

Once you cross the K.R.Puram railway station limits and proceed towards Mahadevapura on the ITPB (International Tech Park Bangalore) road, it is almost like entering into a tunnel. Regular commuters and residents claim they have complained about the risk posed due to these non-functional lights, but their complaints have fallen on deaf ears. In the busy stretch from K.R. Puram Bridge to Hoodi, a distance of about seven kilometres, the streetlights do not function posing a danger to those travelling at night.

Roughly from Trident Hyundai Showroom up till Mahadevapura Police Station for almost two kilometres it is completely dark as the streetlights don’t function and motorists have to solely rely on headlights at night.

“It’s very difficult to travel here during then night. I am helpless about my commuting because that’s my shift timings at work and I usually travel by my bicycle. There are hardly any vehicles on the road when I return after work. I have to be extra careful as due to darkness I have absolutely no idea of the way at times,” said Ravindra Thakur, a security watchman at one of the apartments in the area. From Mahadevapura police station onwards the Metro work is on and hence there are some lights and the authorities have put up reflectors, but it is for a limited stretch.

After that for another three-four kilometres there are no streetlights till Hoodi Circle and beyond till Zuri Hotel, Whitefield. Only at Hoodi Circle there is a cluster of street lights. Amit, a resident of Hoodi, also highlighted the issue, “I usually avoid travelling at night, but once I was coming back late from the airport and that is when I realised how risky this is and no one is working to solve it. The road is completely dark because none of the streetlights are working. All you have to rely upon is your vehicle’s light. To add to that there is so much construction waste lying around, adding to the risk.”

While the residents have welcomed the extension of Metro to their area, the disruptions caused due to its construction is taking a heavy toll. As the area is home to a number of IT majors, the traffic volume was already high. And now Metro work has added to the chaos. Though the government had assured that an alternate road be made ready to ease the congestion, nothing much has been done. These dug up roads are filled with construction debris and lack of streetlights only puts commuters at greater risk.

“It’s good that development is happening, but it should not be at the cost of such carelessness. They have to simultaneously ensure the safety of citizens and ignore these loopholes. Most of the vehicles here go on high beam at night due to insufficient light on the road. The problem is not just of driving on these roads late at night but also the footpaths. I prefer taking a walk for nearby work to avoid traffic, but the dug up footpaths with mud and construction debris without any streetlights is a very risky affair. Reflectors have also been installed only around the metro work, apart from that it is all blackout,” said Praveen who works as well as resides near Hoodi Circle.

While for commuters it continues to be a daily nightmare, the  authorities have done little other than provide assurances to sort out the issue. 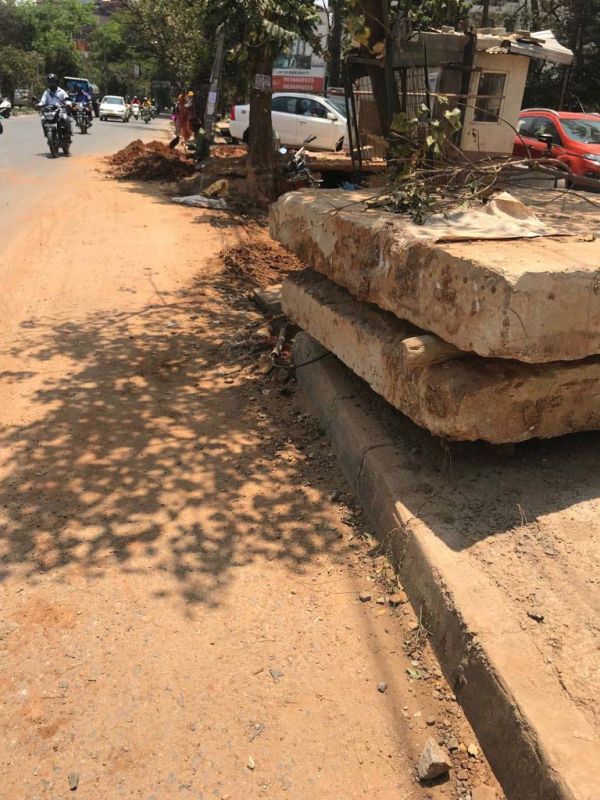 Residents are complaining about the lack of streetlights and scattered construction debris on ITBP road, but nothing has been done so far. What are you doing about the issue?
I have received complaint from someone and immediately got on this work. Due to the metro construction work, some underground cables have been disturbed. I have already spoken to the contractor and the lights will be fixed at the earliest.

Except for a short stretch where metro construction is  happening, there are no lights or reflectors. Why it is so?
We have put up some reflectors and barricades to demarcate the road. At night its compulsory for workers to be in their uniforms that have highlights and they also use lights to guide the commuters in case of diversion of roads at night. We will get more reflectors working where it is completely dark.

Pedestrians complain that footpaths filled with debris and construction waste forcing them to use the road and risk their lives. What is being done to sort it out?
I understand that the metro construction is causing inconvenience to residents and motorists, but we are addressing all of them one by one. We will get the footpaths cleared at the earliest considering the safety of people and ask then ask the workers to segregate the waste only at specified places.

25% Covid beds to be added in Telangana

Colleges in Puducherry to hold classes online from today