Bengaluru: The Karnataka BJP on Thursday called former MTV Roadies judge and actor Raghu Ram an "on camera bully and off camera sissy" after his tweeted that the BJP was spreading hatred on its official Twitter handle.

"Look who's here, the on camera bully and off camera sissy, who was ousted from a reality show for his anger management issues. If you have any sensitivity left, why don't you visit the kin of the 24 deceased karyakartas and know their pain before making loose talks on Twitter," the Karnataka BJP tweeted. 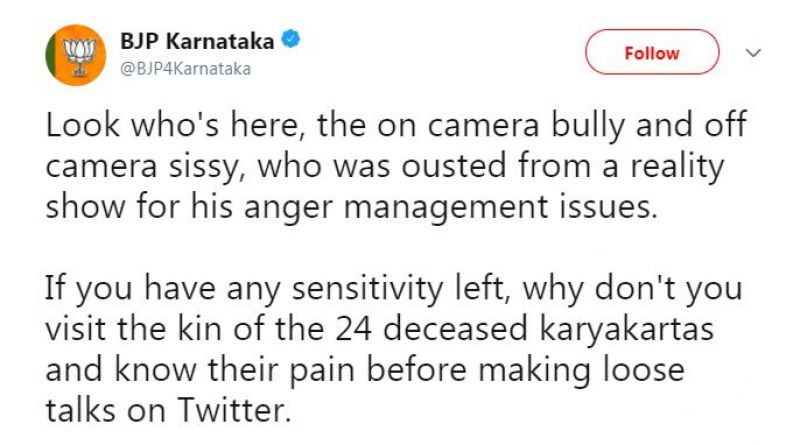 Reacting to the tweet, Raghu said, "I’m so flattered you have time to tweet to me. It’s election time! Surely, there are Muslims to kill, Dalits to burn! Your monthly targets aren’t gonna meet themselves! Come on! Focus! And as for me, read my bio. I love muting morons. Haha! Bye!" 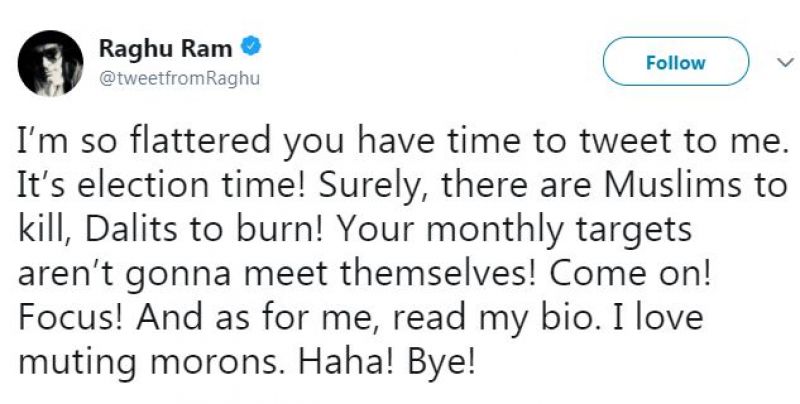 Raghu who is known for his fierceness and anger management issues, had earlier reacted to a tweet by the Karnataka BJP which read, "Our karyakartas get constant phone calls from their families asking them about their safety. Hindus have understood that this govt will not protect them. Fear of annihilation grips every Hindu household in Karavali. Pro jihadi Siddu must go. We must create Jihadi Mukta Karnataka". 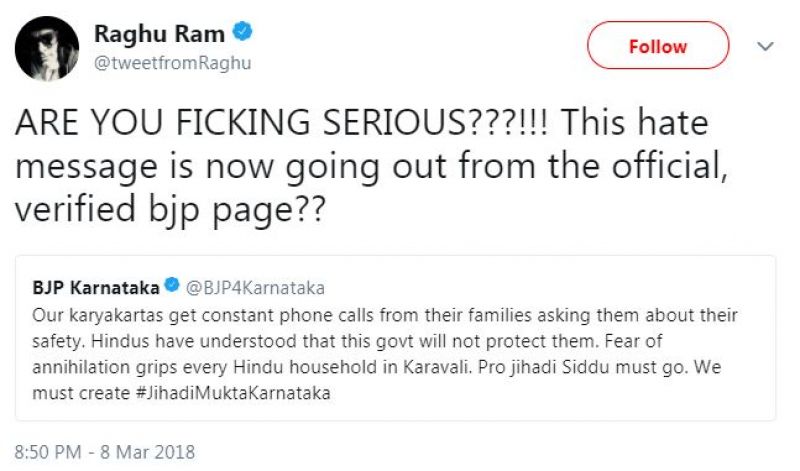 With the Karnataka elections around the corner, the BJP has been launching blistering attacks on the ruling Congress led by Chief Minister Siddaramaiah.

On March 2, the BJP kicked off a 14-day 'protect Bengaluru' march in Bengaluru, with a call to save the city from that party's "misrule."

The party with this march is aiming to strengthen its prospects in the city that has 28 assembly seats, for the coming assembly polls expected in April/May.

This is the second march launched by the BJP, the first being the 85-day "Parivarthana Yatra" that concluded on February 4.

Don’t donate for temple at Ayodhya, let’s have Ram mandirs in TS: MLA