The term coined by India on Thursday is used to describe Pakistan's continuing support for terror and its provision of safe havens for terrorists.

India's response came after Pakistan raised the issue of human rights violations in Jammu and Kashmir.

"The real problem in the State of Jammu and Kashmir is terrorism, which has constantly received sustenance from Pakistan and territories under its control," said Kumam at the 37th Session of UNHRC.

In September 2017, at the UN General Assembly in New York, India said "Pakistan is now 'Terroristan', with a flourishing industry producing and exporting global terrorism."

Almost exactly a year before the "Terroristan" comment, India described Pakistan as "the Ivy League of terrorism", castigating it for financing and supporting terrorist groups it uses as proxies against India.

On Thursday, Mini Devi Kumam also said it had become a habit of Pakistan to misuse the UNHRC platform to make misleading references about internal matters pertaining to Jammu and Kashmir.

"This Council should be mindful that the dubious concern for human rights is coming from a country, which has systematically abused and violated the human rights of the people in Baluchistan, Sindh, Khyber Pakhtunkhwa as well as Pakistan Occupied Kashmir," said Kumam.

She added, "Pakistan has long been attempting to mask its territorial ambitions and use of terrorism as a state policy under the guise of concern for human rights."

The Indian representative also told the UNHRC that Pakistan was committing grossest violation of human rights by exporting terrorism to Jammu and Kashmir.

"Terrorism is the grossest violation of human rights. The real problem in the State of Jammu and Kashmir is terrorism, which has constantly received sustenance from Pakistan and territories under its control," Kumam asserted. 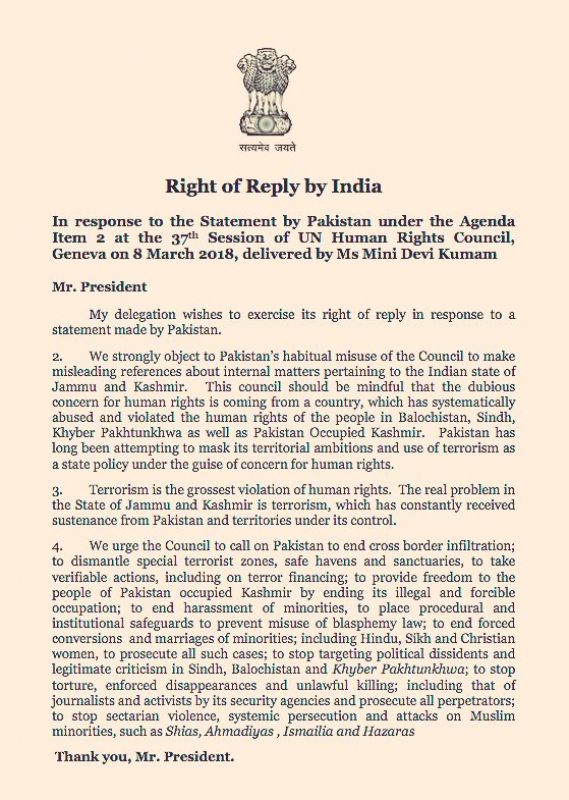 The Indian representative also told the UNHRC that Pakistan should provide freedom to the people of Pakistan occupied Kashmir (PoK) by ending its illegal and forcible occupation.

While highlighting the misuse of blasphemy laws in Pakistan, India said Islamabad should end harassment of minorities; place procedural and institutional safeguards to prevent its misuse.

Kumam also demanded that Pakistan should end forced conversions and marriages of minorities; including Hindu, Sikh and Christian women, and prosecute all such cases.

"We urge the Council to call on Pakistan to stop targeting political dissidents and legitimate criticism in Sindh, Baluchistan and Khyber Pakhtunkhwa and to stop torture, enforced disappearances and unlawful killing, including that of journalists and activists by its security agencies. Pakistan should also prosecute all perpetrators of such crimes," Kumam said.

India also demanded end of sectarian violence, systemic persecution and attacks on Muslim minorities, such as Shia, Ahmadiyas , Ismailia and Hazaras in Pakistan.