Kerala set to vroom on CNG

KSRTC runs one bus fuelled by CNG in Kochi while the fuel is increasingly being chosen by private vehicles, too.

With the LNG pipeline projects making major headway in recent months, oil marketing companies are looking up to a higher demand for the cleaner, cheaper and cost-efficient fuel. Recent data also shows an increase in the number of vehicles using the alternative fuel.

Kochi: Even as the state continues to experiment various modes of cleaner fuel, the electric vehicle policy being the latest, a boom is likely to witness in the sales of compressed natural gas (CNG) what with oil majors gearing up to set up at least a dozen CNG dispensing facilities across the state in one year.

The Indian Oil Corporation (IOC), currently the sole player in the CNG distribution sector, has recorded a major spurt in its sales in the last one year with the January figures alone touching 294 metric tonnes.

“The demand is going up with more CNG vehicles on roads,” said a senior IOC official. "We'll open four more CNG outlets in Kochi besides the LCNG (CNG-LNG combined) dispensing facility at Anayara in Thiruvananthapuram before March 31." The four outlets in Kochi will come up at Cheranellor, Tripp-unithura, Karingachira and Chengamanad.

The first CNG outlet in the state was set up by IOC in March 22 last year. Another three CNG outlets were then opened at Kalamassery (Container Road), Aluva and Kundannur.

"We plan to set up outlets (10 in the next financial year and 50 in the next five years) in districts northwards in line with progress of the LNG pipeline project implementation. With other players -- BPCL (Bharat Petroleum Corporation Limited) and Hindustan Petroleum Corporation Ltd (HPCL), too announcing setting up of CNG distribution outlets, the sector is going to witness a boom in the coming financial year," the official said. 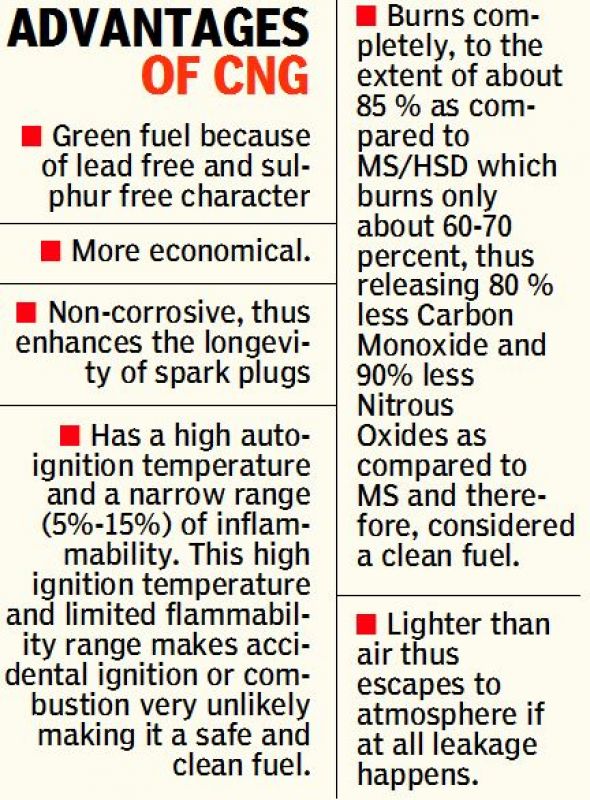 The commercial capital has added nearly 1200 CNG autos and around 650 CNG cars in the last one year. "More of our members are either buying new CNG autos or are converting. Now nearly 1200 of 10, 374 members own the green fuel vehicles," said M.B. Syamanthabhadran, convenor, Auto-Taxi Co-ordination Committee.

However, as against the trend for most part of last year, the previous couple of months saw the demand for conversion of petrol engines into CNG ones drastically dropping.

"There was much demand when petrol prices were increasing. But with fuel price coming down, we're getting lesser orders. Earlier, we used to get over 40 orders a month which fell to 10 last month. However, we foresee a revival of demand in the coming months," said Samuel Ninan, managing director of Edapally-based V6 Autotech Solutions Pvt Ltd, engaged in CNG kit installation.

Several manufacturers are selling bi-fuel vehicles having facility to be driven by CNG or petrol/diesel which are also in high demand. Maruti and Hyundai in cars segment and Bajaj and Piaggio for autorickshaws are such brands.

The main attraction is long-term cost saving factor. A majority of car-owners are those running as Uber and Ola taxis.  "The monthly fuel expense used to come to nearly Rs 20,000 when I was using petrol. After I've set up the CNG kit, the expense hovers around Rs 7,000 to Rs 8,000," said Rahul KG, a car owner and an online cabbie.

However, the vehicles owners need to invest in the beginning. "The cost of CNG kit installation will differ according to the engine type and technology.

CNG vehicles are running in over 15 states and in around 80 cities in the country which are being operated by more than 25 CGD (city gas distribution) companies.

As per Petroleum Planning and Analysis Cell (PPAC), there are 1306 CNG stations in the country to cater to the demands of 30 lakh-odd CNG vehicles. Major cities like New Delhi, Gurgaon, Agra, Lucknow, Indore, Mumbai, Pune, Baroda, Kolkata and Hyderabad are all having CNG as a fuel. 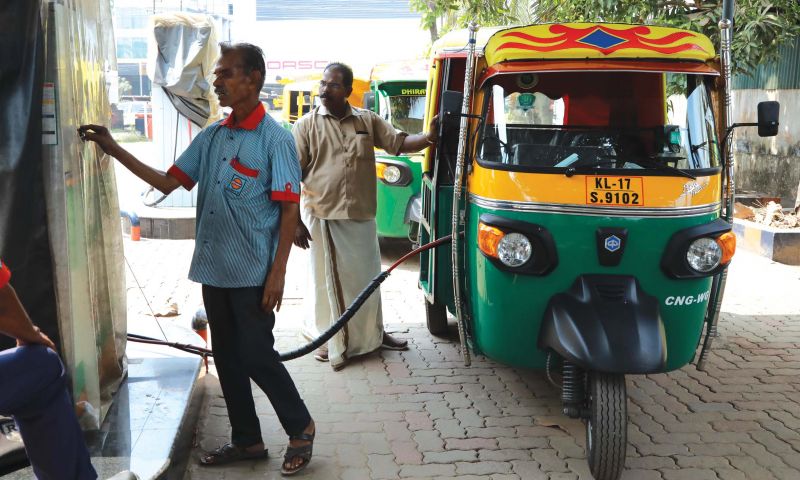 CNG burns cleanly, has no additives
Compressed natural gas (CNG) is comprised mostly of methane gas which produces engine power when mixed with air and fed into engine's combustion chamber. Although vehicles can use natural gas as either a liquid or a gas, most vehicles use the gaseous form compressed to 3,000 psi.

A passenger car converted to use CNG normally have a capacity of approximately 15 litres fuel equivalent of CNG, which can facilitate travel up to 200 kms.

CNG reduces maintenance cost as it contains no additives and burns cleanly leaving no by-products of combustion to contaminate spark plugs and engine oil.
It is estimated that CNG produces 20-30 per cent fewer greenhouse gas emissions and 95 per cent fewer tailpipe emissions.

Rajnath for freedom of navigation in South China Sea