Hyderabad: The temple is a Hari Hara Kshetra where Lord Shiva and Lord Vishnu reside in one place.

“This temple was built in 1219,” says Yadavalli Venkateshwarlu, the only priest in the temple. One of the pillars of the mandapam is cited as proof. The legend has it that Bhulumalle Narsaiah built this mandapam in 1219. “The temple has supernatural powers, which is stronger than that of Tirumala,” he claimed. 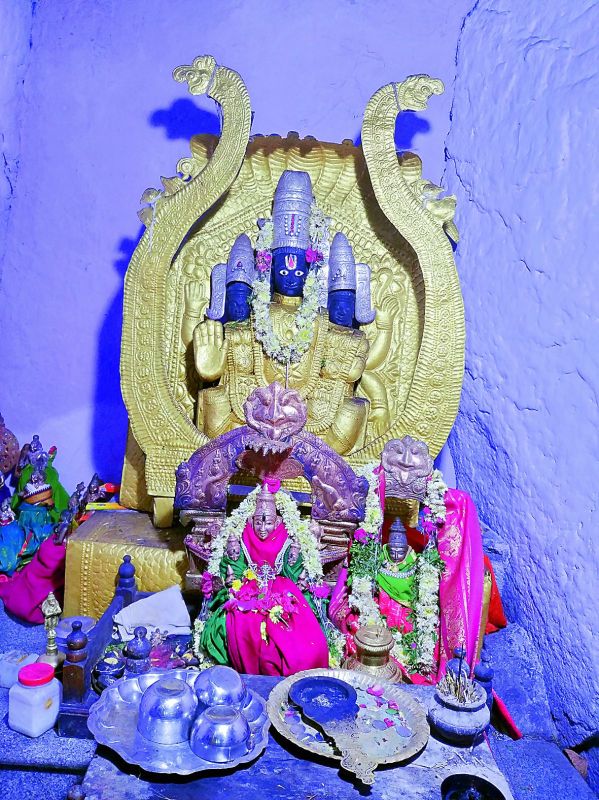 Most people in the twin cities of Hyderabad and Secunderabad are not aware of this 800-year-old temple, located nearby.  Jodimetla is a village on the Uppal-Warangal road with many colleges and it is easy to miss the turn which leads to Venkatapur village. Anuraag Group of Institutions serves as a popular landmark.

Recently, a signboard has been put up at the Jodimetla junction, showing the temple location. It lies near the Talakunta lake which is also connected to Tirumala as Rathotsavam starts by chanting Talakunta Venkateshwara Govinda, Govinda.

“That is because Lord Venketeswara rested here along with his consort Lakshmi enroute to Tirumala,” Venkateshwarlu, says and adds, “He is called Balaji here.” The Balaji is swayambhu and is embedded in a rock around which the temple is built. 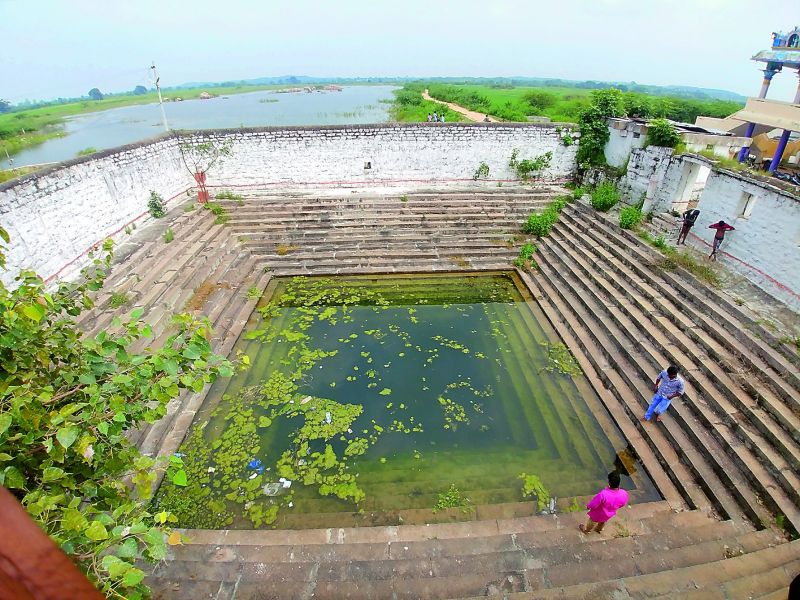 A view of the sweet water lake or a koneru known as Mahanandi which irrigates 45 acres of the temple land.

The priest said that he is a Smartha or a Shaivaite and the temple is a Hari Hara Kshetra where Lord Shiva and Lord Vishnu reside in one place. There must be a story behind the Shiva temple. However, the priest pleaded his ignorance about it. Though the Shiva linga and Swayambhu Vishnu existed together, the temple is called Sri Balaji Venketeswara Swamy Devasthanam.

Lord Vishnu is present here as Mohini and is standing on the left side of Shiva, who is the ultimate personification of manhood, forcing Lord Vishnu to take the avataar of a woman. The temple icon does not show all these intricacies. In fact, it is dark that it is not visible unless some light is flashed on it.

There is also a sweet water lake or a koneru known as Mahanandi. Both the lake and the koneru help irrigate 45 acres of the temple land. Though none of the produce comes to the temple, people are engaged in growing paddy.  None of them are connected with the temple either. Most of it is usurped land.

There are four villages surrounding the temple Tenugudem, Venkatapur, Malla and Koremulla. The  priest has developed facilities for drinking water for the devotees.

Venkateshwarlu narrated various ‘miracles’ he has witnessed from 2000.

Once a lady visited to the temple and offered wheat as an offering to the Lord. She told the priest that it was for her health and a vow. She had been diagnosed with blood cancer and had two children.

“When she told me her story, I felt sorry and prayed to the Lord,” says Venkateshwarlu. While she continued with her medication, she also conducted all the pujas, including a yagam.

“Her medication was expensive and one capsule cost Rs 25,000,” says the priest. Later, the lady came with her family and said that she had been totally cured of her ailment. Now, she drives a vehicle and comes on her own to worship in the temple, the priest adds.

Another person wanted to start a real estate business and prayed at the temple and promised to make a wooden statue of Lord Venketeswara if his business succeeded.

Soon, he decided to go to Tirumala and decided to put some money in the hundi and went in search of an ATM. To his luck not one of them was working and some of them did not have cash to dispense.

He then realised that he had actually vowed to donate this to the temple at Venkatapur and came back and made his donation. He also helped in developing the temple. He has now promised to donate Rs 20,000.

One day, a police inspector came to the temple in uniform. Venkateshwarlu told him about the various miracles. The priest told him to return to the temple with his family.

Within the next ten days, the inspector returned and merely told the priest that the temple was powerful and he gave a donation of Rs 10,000. He prayed to the idol before leaving.

“I do not know what he asked for and why he was donating. I gave him the receipt and saw him go happily,” says the priest.  This temple, as all ancient temples are, is located in a forest.

At present, there is a mud road leading to the temple. The temple itself has a dilapidated look and snakes move around freely within the temple compound.

Venkateshwarlu plans to improve the temple and says that a devotee will get his wish fulfilled if asked in full faith.

Why Centre resisting direction to translate draft EIA in all vernacular languages: HC