Mysureans beware, your history in peril

DECCAN CHRONICLE. | SHYAM SUNDAR VATTAM
Published Sep 8, 2019, 4:24 am IST
Updated Sep 8, 2019, 4:25 am IST
How safe are the historic monuments of Mysuru-the cultural capital of Karnataka which sees an amazing number of domestic and foreign tourists.

Sending shock waves through the hearts of every history lover, Lansdowne building situated in the heart of the city just a stone’s throw distance from the majestic palace of the erstwhile rulers of the Mysuru state, collapsed a few years ago despite then CM Siddaramaiah releasing Rs 6 crore for the renovation of this building which was constructed to mark the official visit of Lord Lansdowne in 1892.

The structure had withstood rain and storms  for many decades but finally caved in due to lack of maintenance by the Mysore City Corporation (MCC).  An expert committee has advised total renovation of the building but municipal officials wanted to demolish the  structure to which Mysureans hotly objected. The MCC authorities are reportedly not ready to take the assistance of INTACH which has expertise in renovation and preservation of historic buildings. With no sign of renovation happening, this structure or whatever remains of it, has become a place for people to urinate while temporary shops put up in front of the collapsed structure have become an eye sore.

Then came the next shock-a portion of Devaraja Market-a one stop shopping hub for many years, caved in, again because of lack of maintenance by MCC. This incident occurred when  some engineers were involved in drilling work during renovation of the arch facing Dhanvantri Road. The previous government headed by  H.D. Kumaraswamy was all set to demolish the entire market to construct a new three or four-storey building with two levels of parking facilities. However, the project was dropped after the change of government and the constant pressure by citizen groups. The MCC has not spent even a paisa on maintenance leading to suspicion that it is waiting for the structure to collapse on its own!

The third shock came recently- the portico of the century-old fire brigade building at Saraswathipuram-one of the oldest localities in Mysuru, collapsed in heavy rain. This building belonged to the Department of Fire Services but was under the care of the Department of Heritage-a separate wing created to take care of heritage buildings across the state.

The collapse of these three structures has posed a big question over the health of other heritage buildings across the city. According to an estimate, there are around 200 heritage structures in Mysuru but the department is not in a position to take care of them due to paucity of funds. While other cities in India are striving to maintain heritage buildings,  Mysuru is losing them one by one which many blame on lack of vision.

Not many elected representatives are interested in preservation of the heritage structures and are more concerned about giving them a mere cosmetic touch spending crores of rupees. Several restoration projects which were supposed to enhance the beauty of the city, are caught in legal wrangles including one conceived by the MCC to build a multi-level car parking facility inside the historic Sir Dewan Ranga Charlu Bhavan, popularly known as Town Hall. 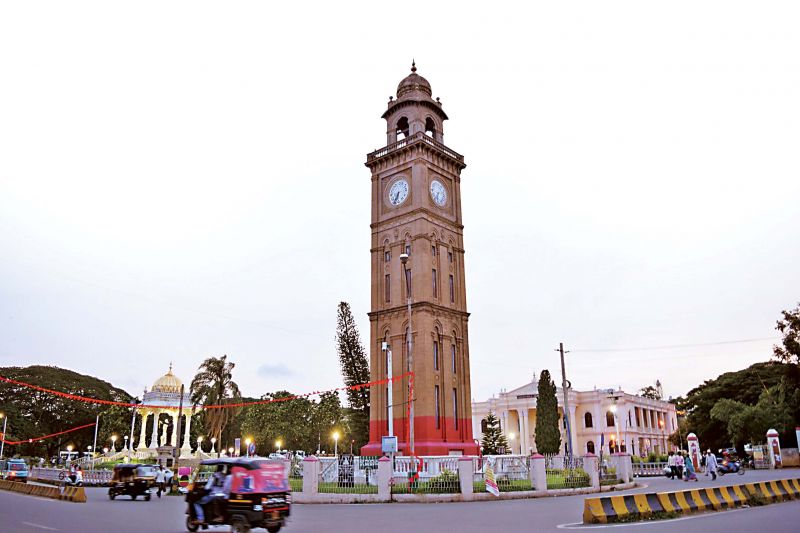 The iconic big clock tower near the famous Mysuru Palace is facing a threat of collapse unless the MCC authorities act swiftly. (Photo: DC)

Blame it on lack of coordination
There seems to a lack of understanding between the MCC authorities and civil society on many issues. The civic body has its own agenda and does not take citizen groups into confidence before finalising projects. The previous Congress led UPA government headed by Dr Manmohan Singh had released crores of rupees to Mysuru under the JNNURM scheme but not many renovation projects saw the light of the day. Unfortunately, the city also lacks a strong enough forum to echo the sentiments of Mysureans.

A rare breed of royals
The Wadiyars were a rare breed of kings who gave priority to the beautification of their capital city by planning heritage buildings, broad roads, footpaths and civic infrastructure which made Mysuru a model for the entire country. The concept of planting roadside trees to provide  clean air was an idea popularised by the rulers of Mysuru who are said to have had a vision for the next 50-100 years. But after a wave of modernisation swept across the city,  trees were axed and the size of the wide roads was reduced to accommodate the growing number of vehicles leaving Mysureans aghast.

Contradictory views
According to sources, the authorities of Mysuru City Corporation prefer the demolition of Devaraja Market and Lansdowne building instead of restoring them. But an expert committee favours restoration to demolition. The Karnataka High Court has constituted a committee to look into the condition of these two buildings and suggest whether to go for renovation or demolition. The panel is yet to submit its findings.