Missing: The story of Bengaluru’s runaways

Child missing case is considered as kidnap straight away by the police. Immediate investigation is taken up considering all the permutations.

Nearly 7,000 children have been rescued and rehabilitated in Bengaluru, between June 2017 and May 2018. Another 4,829 children were taken off the streets between 2018-2019. Some are trafficked, others runaways, but Indian cities are full of lost children and they come here to meet a dangerous, dismal fate. They are exploited as labour, in the flesh trade or used for organ harvesting. Trafficked children come from various states and often the trafficker is a relative. Others, who run away from home, are driven out by poverty, abuse, even peer pressure. Experts say that too liberal or too strict parenting can lead to this. Missing children are treated as kidnap cases by police. NGOs are hot on the trail too, working with staff at railways and bus stands to trace, rescue and rehabilitate these lost children, reports M.K. Ashoka

Little boys dream about making it big in cities as we have seen in movies. The kids are so enamoured by the lights, grandeur, traffic and the razzmatazz of city life that little do they realise that these attractions are driving them away from homes.

Yes. Peer influence and fascination for the city are some of the major factors for children to leave their homes. The statistics released by Bosco Bengaluru, an NGO involved in child rescue and rehabilitation in the city for almost four decades substantiates this viewpoint.

Children trafficked from all over the country are traced based on the information received from the Railway Protection Force (RPF), Railway Police, porters, sweepers, catering people, TTE’s, shopkeepers on platforms, auto-taxi drivers.

Well trained child traffickers come with duplicate Aadhaar cards. They also train children to lie before the authorities. The kids are directed to identify the trafficker as their uncle or aunt. It’s only after cross questioning and grilling that trafficking cases are identified. Children are trafficked from states such as Odisha, West Bengal, Bihar and Chattisgarh among others. Educating the children in villages of these states is given a go-by.

Child trafficking is encouraged from all corners as paying a child is much lesser than paying an adult. As many as 2,402 boys and 288 girls of different ages have been rescued and rehabilitated in Bengaluru within a year.

District-wise report shows that Bengaluru Urban tops the list with 852 boys and 260 girls being rescued and rehabilitated. It is followed by Kalburgi and Tumakuru districts. Trained staff of Bosco, about 12 of them are deployed in city railway station. Six of them keep a round-the-clock vigil at BMTC & KSRTC bus stops in Majestic.

The Bosco team is also present in Shivajinagar, K R Market, Kalasipalya and Mysore Road Satellite Bus Terminal. The team members with volunteers look for runaway and trafficked children in 120 BBMP wards. They reach out to children who are unaccompanied, trafficked and runaway.

A child safety net team visits slums in Bangaluru South looking for child labourers and to ensure that they are rescued. 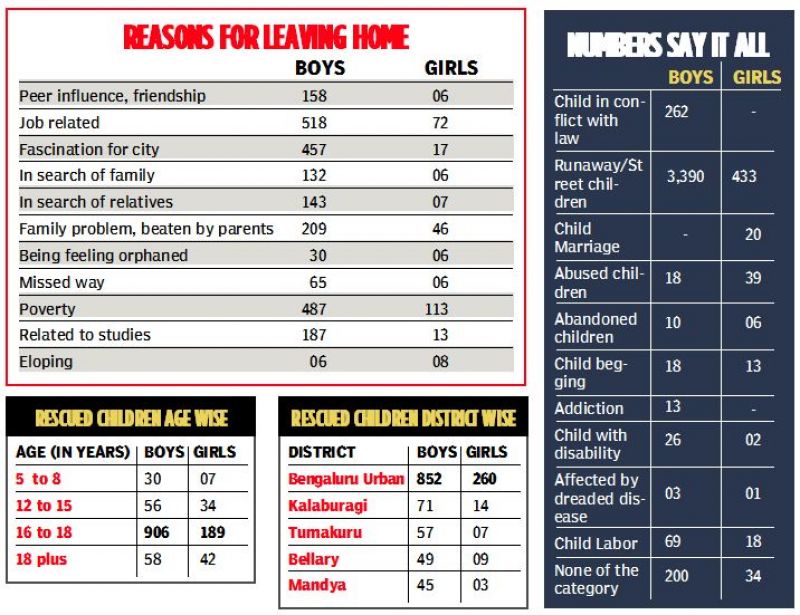 Every day, 12 to 15 fresh children in Bengaluru are rescued by Bosco NGO volunteers. The NGO runs 7 children’s homes, where food and shelter is provided to boys and girls. Children are given education, skill training etc until they can go home.

“The speciality of our staff is that they have the skill to identify trafficked and runaway children in their blood,” says Ravindra K D, a caretaker of children.

There is coordination between departments of police, transport, railways, women and child welfare, education and health in the process. The role of Child Welfare Committee (CWC) is vital and directions are taken from the committee in all the steps.

Children driven away by excesses of parenting

Lakshmanagiri, the dreaded serial killer in Bengaluru used to kidnap and kill little girls. As many as seven dead bodies of little girls were found one after the other in the empty fields surrounding Magadi Road.

When he was caught, he confessed that the little girls were sacrificed for black magic.

Can anyone imagine the plight of parents and its impact on society?
Once a child goes missing anything can happen. The police department is guided to consider missing cases of boys and girls as kidnap cases, says Nagaraj M, a senior retired police officer.

There is a separate wing in all police stations, which does a background verification.

Veerappan is said to be a missing child who caught up with a small poacher and went on to become a outlawed forest brigand. This is the seriousness of child missing cases. When a child goes missing maximum efforts have to be put to trace their whereabouts.

Too much is spoilsport: Whether parents exercise too much of control or are too liberal, both the factors push the children to disappear from home, says senior psychologist Dr Ashok HA. Liberal parenting or exercising too much of control is going to be harmful, he says.

Young parents do not have proper education or knowledge on parenting. When they have children they do not enjoy a proper support system. However, there is a lot of literature available saying that we should spend lot of quality time with children. Dr Ashok says parents need to balance between being too strict or too liberal in their parenting.

Second component driving children away from home is technology. Children get influenced when they are exposed to media and technological gadgets which they find quite attractive. Children get attracted with one fascinating episode to come to cities, he adds.

Dr Ashok further says that corresponding to the attainment of maturity, the children go through drastic physiological and emotional changes. Dr A Sridhara,a senior psychologist says, schools have become concentration camps for children. “Which school will allow a child when he or she wants to talk,” he underlines. All negativity gets bottles up and thus child becomes disturbed, he says.