The Ground Water levels are being measured through the Assistant Hydrogeologists of TWAD Board, who are measuring the water level with the help of electronic device namely water level indicator in 1,286 Observation Wells across the state by TWAD Board both in pre-monsoon and post-monsoon periods. (Representional Image)

Chennai: The TWAD Board conducted video conference featuring its MD Dr. C.N.Mahesvaran, with all engineers of the Board, besides Assistant Directors (Panchayats and Town Panchayats) of all the districts on Friday and instructed them "to effect water supply until tail end beneficiaries and clear all the hurdles on war footing efforts".

TWAD is providing safe-potable-equitable drinking water to the tune of 4.23 crore people of Tamil Nadu, except the Chennai metropolitan area, with the present supply of 1,816 MLD against the designed quantity of 2,146 MLD of water, covering eight Corporations, 67 Municipalities, 347 Town Panchayats and 48,948 Rural Habitations.

The reasons for shortfall of water supply apart from the less rain fall are as follows: Tamil Nadu has no perennial river source to increase the water table in the river basins as we find in the case of Northern states like Uttar Pradesh, Uttarkhand, Gujarat, West Bengal, Odisha and Maharashtra.  Tamil Nadu consists of 17 River Basins - Chennai basin, Palar, Thondiyar, Pennaiyar, Vellar, Cauvery, Aliyar, Agniyaru, Vaigai, Gundaru, Pambar, Kottakaraiar, Vaippar, Tamiraparani, Kallar, Kumari and Nambiyar Basin, that cover from Tiruvellore to Kanyakumari. No perennial river exists in Tamil Nadu except Thamiraparani.

Tamil Nadu falls in the rain shadow region as it lies on the eastern (leeward side) side of Western Ghats and that hampers the rainfall pattern during South-west monsoon to benefit Tamil Nadu as witnessed in the last two years.

The rainfall also varies from year to year. The actual rainfall during 2018 was 811 mm as against the normal rainfall of 960 mm, which was due to the contribute from southwest monsoon and northeast monsoon rainfall of 450 mm and 510 mm respectively as seen below. 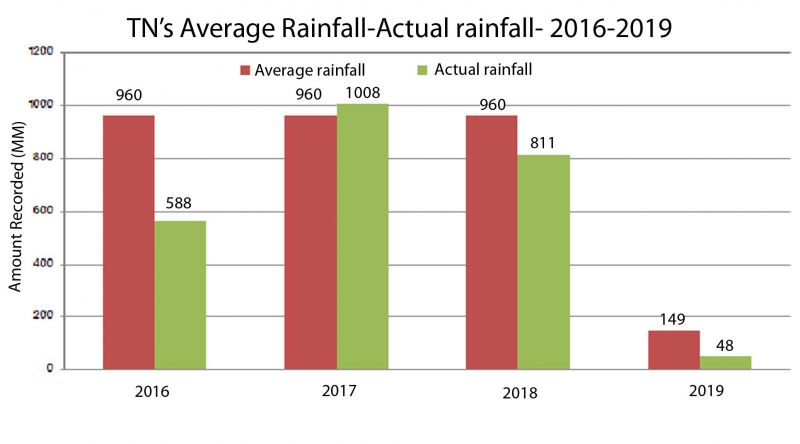 The Ground Water levels are being measured through the Assistant Hydrogeologists of TWAD Board, who are measuring the water level with the help of electronic device namely water level indicator  in 1,286 Observation Wells across the state by TWAD Board both in pre-monsoon and post-monsoon periods. The water levels observed in 16 districts are more than 15m Below Ground Level.

The consistency in the construction and maintenance of rainwater harvesting structures by the people is very poor. Hence, all officials of TWAD Board including the engineering, hydrogeology, water quality wings have been directed to take up the SWOT analysis proactively to improve the service delivery of TWAD Board, in all the Combined Water Supply Schemes (CWSS) to ensure the supply of good water.

SWOT analysis on Head Works:
The strength and weakness of the water source should be scientifically explored taking the following points into consideration: Sustainability of the water in the storage reservoirs; money available to take up the supporting works - source augmentation; flow diversion channels towards the collector or infiltration well; construction of baby wells; drilling side bore; flushing of wells; deepening of open wells; radial arms cleaning;  public objection in putting new wells; availability of water in the reservoirs-wetting of river: power supply.

Water is essential for survival of all living things like plants, animals and mankind. Hence TWAD requests that instead of acquiring property and any other assets or money, the general public, philanthropists, NGOs, Corporate Social Responsibility (CSR) and Social Welfare Peoples should come forward to execute the Rainwater Harvesting (RWH) structures in mission mode which would be lifesaving assets for the future generations and also to our great Mother Nature.

TWAD Board has prepared a Block-level atlas (Hydro-geo-morphological maps) which shows the highly potential areas for construction of rainwater harvesting structures and water available area for drilling of bore wells. The atlas is available at all the Collectorates of the respective Districts, Project Director's office of DRDA and with the Executive Engineers, TWAD Board.

The writer is Managing Director of TWAD Board