New Delhi: The Rashtriya Swayamsewak Sangh (RSS) on Friday blamed "divisive political forces" for first trying to make former President Pranab Mukherjee "refrain" from attending its event and then for posting a morphed photograph showing him in a prayer position identified with the organisation.

"Some divisive political forces have posted a morphed photo of former President Dr Pranab Mukherjee standing in a prayer position with a folded hand during recitation of Sangha 'prarthana' (prayer) at yesterday's RSS function at Nagpur," the Hindutva organisation's joint general secretary Manmohan Vaidya said in a statement.

"These forces initially tried to create an opposition to make Mukherjee refrain from attending this function and now these frustrated forces are indulging in all such dirty tricks to defame the RSS. We denounce and strongly condemn the lowly act of these divisive political forces who are deliberately trying to defame the RSS," he said. 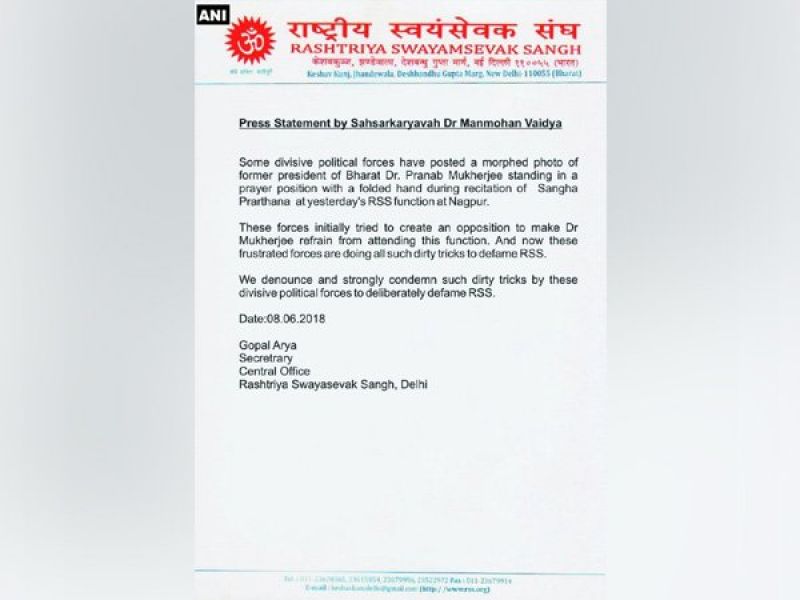 Mukherjee's daughter Sharmistha Mukherjee, a Congress leader who had opposed his visit to the RSS event, had highlighted the photograph and said, "See, this is exactly what I was fearing & warned my father about. Not even few hours have passed, but BJP/RSS dirty tricks dept is at work in full swing!".