Vayalkkilikal carry out a protest march at Keezhatoor. — DC File

THIRUVANANTHAPURAM: Invoking the Chinese Red Army’s heroic flight from the Kuomintang’s ruthless measures to encircle and annihilate the communist forces, Keezhatoor agitation leader Suresh said that ‘Vayalkkilikal’ would conduct a ‘Long March’ if the state government persisted with its high-handed ways to stifle the movement, and delays a solution to the bypass construction. “We will continue with our struggle, and we have the courage and the energy for this. We have also demonstrated the support that we could summon. But even after all this if the government is still not willing to hold a dialogue, our struggle could even result in a Long March,” Mr Suresh said in the capital on Saturday, his first public address outside Keezhatoor. “A village or taluk march will work no more. Our only hope is that we will not be forced to resort to such a move to make the government see sense,” he added. He was speaking at a discussion on the topic ‘Keezhatoor and Kerala’ organized by Communist Marxist Party (CMP) here.

The strategy of the leader of ‘Vayalkkilikal’ is not exactly clear but the historic Long March of 1934-35 - during which the Chinese communists escaped from the southeastern part, where they were trapped, to the northwestern part of China braving starvation and the ruthless tactics of the imperial forces - had captured the imagination of poor Chinese peasants and had eventually led to the emergence of Chinese Communist Party as the biggest force in China. Suresh was clearly painting ‘Vayalkkilikal’ as a small group being circled on all fronts by the powerful CPM machinery, just the way the vastly outnumbered Chinese communist forces were sought to be destroyed by the Chinese Nationalist army or Kuomintang in the early 1930s. Suresh’s first public appearance outside Keezhatoor could also be the first step to break out of the confines of their little village, under the absolute control of the CPM, and carry their fight outside. In that sense, the Long March of ‘Vayalkkilikal’ has already begun. From the capital, he will travel straight to Kottakkal in Malappuram where a struggle is on to protect paddy lands from being taken over for highway development. 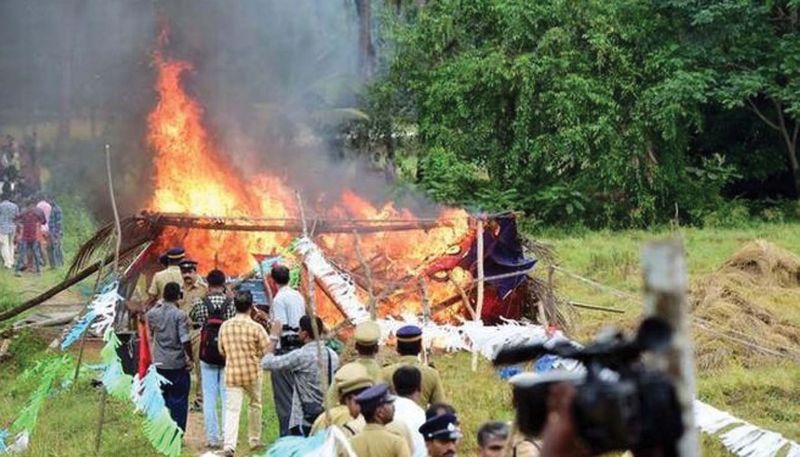 Shed gutted in fire. It was alleged that CPM members set fire to the shed.

The very fact that not even a small patch of paddy land in Keezhatoor has ever been converted, by itself, sends across a strong political message. “When large swathes of paddy fields across the state have been taken over for development, why do you think the fields in Keezhatoor were left untouched,” Suresh asked. “We have not allowed anyone to touch our lands because the spirit of the Morazha struggle still lives in us. Many peasants from Keezhatoor were part of the Morazha agitation,” he said. Morazha is just five kilometers from Keezhatoor. The agitators, in short, are proud of their Communist heritage. It is also why the ‘Vayalkkilikal’ were quick to realize their mistake of taking part in a meeting organized by the BJP. “We should have been politically alert,” Suresh said. Now, it has been decided that the group will not be part of any agitation organized by any political party. “But we are not averse to anyone wanting to be part of our struggle,” he said.

Suresh wants to counter the propaganda that they are anti-development. “I know highways and bypasses are needed,” he said. “What we are against is development terrorism,” he said. He wondered why the government was insisting on the existing alignment for the national highway bypass. He said that two bypasses that were nearing completion - Puthiyatheru to Thaze Chovva and Valappattanam to Thottada - would de-stress the national highway passing through Taliparamba. Further, he said the government had rejected alternatives that were put on the discussion table. For Suresh, Keezhatoor itself is the clinching argument. Most of the ponds and streams in Kannur have dried up this summer. “But a sliver of water flows through the Keezhatoor pond. We will put small check-dams on the pond, and this will improve the groundwater in the area,” he said. Keezhatoor is the source of water even for elevated areas in Kannur. The pumping station in Keezhatoor that feeds a large part of Taliparamba town is fully dependent on the paddy fields in Keezhatoor.

Suresh is no doomsday hawk either. It is just that he had known what it is to be without water. He had worked for five years for a Spanish company in Equatorial Guinea, a Central African autocracy where water had to be purchased at high cost. “A substantial part of our income goes into buying water in large cans,” Suresh said. “If paddy lands are not protected, such a situation could come to pass even in our state,” he added. There is a moment in the new release ‘Sudani From Nigeria’ that shows why Suresh’s desperation to save water sources is no paranoia. The young black footballer, who comes from a land where water is nowhere to be found, just cannot stand a man using too much pipe water that he yells at him as if he had committed the greatest crime of his life.

Congress leader K Muraleedharan, while elaborating the Congress’s stand on the Keezhatoor agitation, was not worried about the loss of paddy fields. “Even I had sold paddy lands given to me by my mother,” he said. The Congress leader wanted lands to be taken over for development but said his objection was to the high-handed manner in which the LDF government was trying to impose its will on the people of Keezhatoor. However, another UDF leader C P John of CMP had a different view. He too had sold paddy lands he had owned and is pro-development but said it should not be at the cost of depleting water resources.

Muraleedharan said that development should be carried out but without a gunshot being fired. “Hold talks, and things would be solved,” he said. Both were speaking at a talk organised by the Communist Marxist Party on 'Keezhatoor and Kerala' here on Saturday. Mr John said that he too was not particularly disturbed when paddy lands were being taken over for development. “I have always stated that I am not a ‘touch me not’ kind of environmentalist,” Mr John said. But he said he was a changed man after he had visited Keezhatoor. “The place is above sea level but no place has a better water table than Keezhatoor,” Mr John said. He said the Keezhatoor agitation was relevant more in the context of depleting water table than as a struggle to save paddy fields. 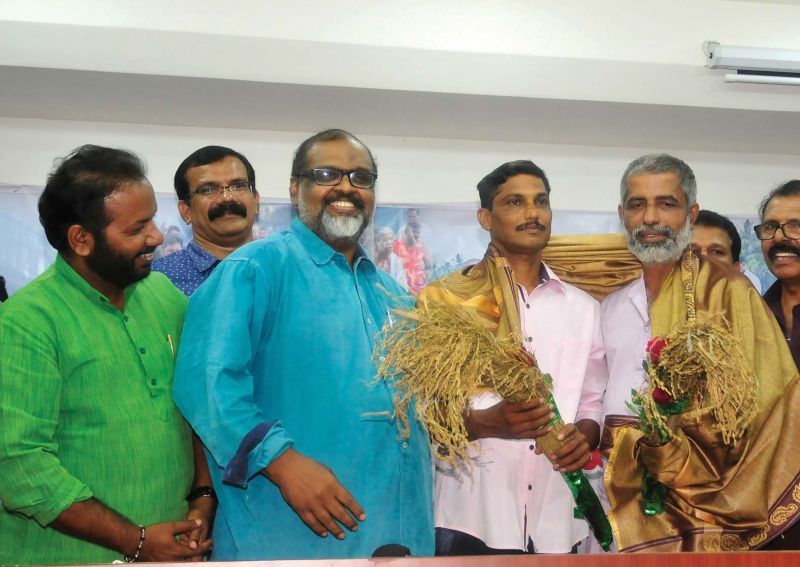 Muraleedharan but framed the agitation in mere development terms. His fight is only with how the struggle against development is managed. “There were protests in Nedumbassery and Kayamkulam before the airport and the power plant were constructed. But the foundation stones for both the projects could be laid without a firing a shot or lifting a lathi because the then political leadership could convince the people of the benefits of these projects,” Muraleedharan said. He said the LDF government should talk to the agitators. “The government has shown the willingness to talk to Malappuram agitators, and earlier they had talked to GAIL protestors. Then, why not with those agitating in Kezhatoor,” he asked.