Are we on the way to achieving real gender parity at the workplace and in other areas of life?

As another International Women’s Day dawns on Thursday the city has several activities planned to  honour its women achievers in different fields, be they entrepreneurs or professionals. But is this merely a token gesture or are we on the way to achieving real gender parity at the workplace and in other areas of life? Ayushee Chaudhary, Pragna L. Krupa and Aknisree Karthik report.

While giving finishing touches to the Industrial Policy 2014-19 as ACS (Industries and Commerce) in April 2014, I found to my dismay that the earlier policy did not particularly focus on women entrepreneurs and instead clubbed them along with ex-servicemen, the physically handicapped and so on. I felt there should be a separate chapter for every category because the needs and requirements of each are different.

So special care was taken to work out a package for women entrepreneurs with a host of incentives, concessions and facilities with exclusive women's parks.  After the policy was launched on  October 14, 2014, I felt we needed to discuss with women entrepreneurs whether iy needed any changes and so all the women's associations were called to discuss the "Way Forward".  To my surprise nearly 200 to 250 women entrepreneurs turned up although we had invited only around 50.  Seeing the response, I was filled with confidence and enthusiasm.
During this time, I came to know of several associations of women entrepreneurs like AWAKE, Emerge, COWE, KASSIA, WEKAS, and LAMP that worked independently of each other and felt they needed to come together for better results.  The thought excited me and I started working towards bringing them together.

Read | Guest column: Legal framework has ushered in many changes

The first opportunity came with Invest Karnataka 2016. A Whatsapp Group called IK-WE was formed of bureaucrats, engineers in charge of women's parks, and presidents of women's associations, among others and we began to discuss the progress of Invest Karnataka, a global investors' platform.  The meet, held from Feburary 3 to 5, attracted more than 10,000 delegates from all over the world and for the first time we had a women entrepreneurs' seminar and an exclusive vendor development meeting with top MNCs.  The event attracted more than 400 women entrepreneurs.

As the women entrepreneurs started getting together someone in the group suggested we  should change its name to Ubuntu, which refers to the Ubuntu culture of Africa that is based on the joy of sharing and giving. It is said that an anthropologist researching an African tribe proposed a game to its children. Placing  a basket of sweets near a tree , he announced that whoever reached it first would get all the sweets. But to his surprise, the children held hands and ran together towards the tree, shouting "UBUNTU" meaning one could not be happy while others were sad.

We also felt that Ubuntu was closer to the Kannada word "Oggattu" which also means together. That is how Ubuntu was launched and one saw a new enthusiasm and unity emerging among the women, who no longer felt alone in their struggles. Seeing the success of Invest Karnataka, the women entrepreneurs proposed that a delegation should visit the WEConnect Conference in Orlando and so for the first time a delegation of 21 women attended this conference.

Again in 2016, a similar delegation participated in a conference in Austin.
This is how the idea of organising the world's largest women entrepreneurship summit called ThinkBig was born and it was hosted in Bengaluru on November 14 and 15, 2016.  Then on June 13, 2017 a delegation of women entrepreneurs left for Las Vegas to participate in the conference hosted by We Connect.

This year on the occasion of International's Women's Day, the government of Karnataka, in association with the Karnataka Udyog Mitra, knowledge partner
TTC, and event curator MM Activ, along with a host of other partners and associates, organised a unique and celebratory event called Women of Worth to salute women achievers from different fields.  Chief Minister Siddaramaiah, distributed special WoW awards to women from all walks of life, recognising their worthy contribution in developing the state.

In the West a movement has begun for MNCs and major companies to procure aminimum percentage of their requirements from women entrepreneurs. Karnataka is a forerunner in this and we hope more and more women benefit from it and  move from being housewives to employees and finally, employers. As a result of our endeavours, women entrepreneurs are now able to position themselves more clearly  in the marketplace,   have easy access to government schemes and information and are more accepted by financial institutions, the government and society.

Karnataka is now seen all over the world as the capital of women entrepreneurship and our aim is to involve more and more women entrepreneurs in the economic development of the state. Recently We Connect International gave Karnataka  an award for being the "Most Supportive Government" for women entrepreneurs. This has motivated us to further boost women empowerment.
— K. Ratnaprabha, Chief Secretary, Government Of Karnataka 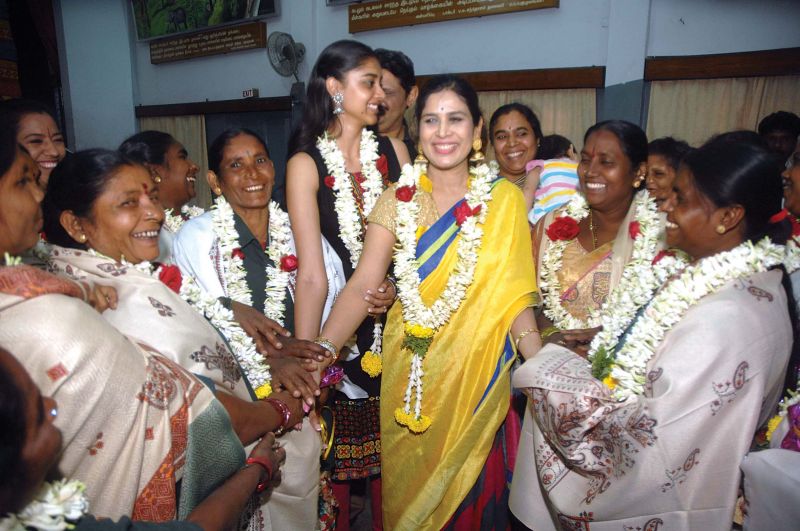 Women power on the right track

A Jailor who overcame many odds
Her path has been far from easy. Ms R Latha, 37, Assistant SP of the Central Prison for Women at Tumakuru recalls her struggles as the first Superin tendent of Prisons at Tumakuru in 2007 .

"Even the male prisoners at the prison did not want a woman as SP. In my initial days I was made to cry and felt like quitting, but I took my job as a challenge and started to crack down on illegal activities,” she recounts.  There was no turning back after that. Today she is helping the 81 women prisoners lodged at the Central Prison for Women  to learn to write and gain confidence in their abilities. 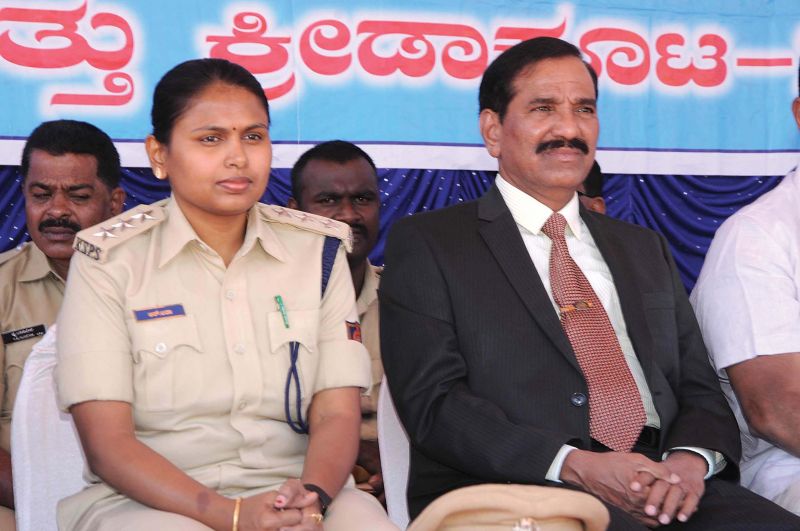 Ms R Latha, 37, Assistant SP of the Central Prison for Women at Tumakuru

It all began when we went shopping for a school bag for our daughter, but could not find a suitable good quality, reasonably priced one. Then we thought of creating our own brand. However, marketing was a major challenge. With no advertising and marketing budget, we strategized and differentiated our products by giving the best of quality and excellent designs without overcharging. This created a craze for our products in comparison to the bigger names. When Metro Wholesale launched its outlet in Bengaluru we saw a window of opportunity for our brand. Today, we are one of the top five backpack brands.”
— Ruchi Jindal, Founder, F Gear

All of society loses when women don't get the roles they deserve. At Grow Fit we work hard to ensure that good people level up. I think that's all women are asking for, a level playing field to do their best. I'm delighted to see women of all ages re-inventing themselves. The glass ceiling will be conquered, it's just a matter of time and all of us - not just women- lose while it's still around.”
— Jyotsna Pattabiraman, CEO & Founder of Grow Fit

I think Indian women are slowly shattering the glass ceiling. The banking industry is one such example and I am sure we will see similar trends in other industries. There is currently a lot of attention being given to encourage more women in the workplace. At Brigade for instance, we have created an all-women’s engineering team that is working on constructing a commercial and retail arcade of about 3 lakh sq.ft. We have women lawyers, architects and civil and mechanical engineers working on the project from start to finish. However, there are still a few gender biases when it comes to women. For instance, if a woman is a bit aggressive she is called bossy, but if a male is aggressive he is seen as assertive. It will take more than one generation to eradicate these biases.”
— Nirupa Shankar, Director, Brigade Hospitality and Founder, Brigade REAP

“I am a mother to a two-year-old and a novice zumba instructor and the choices don’t come easy. I was married early and used to give in to the decisions made for me by others. But thankfully we are  evolving as a society and with the correct exposure we know what is right for us. But the acceptance takes a while for the family.”
— Shefali Yadav, 25-year-old zumba instructor

I won’t deny that while growing up there was a difference between the conditioning of boys and girls. I was blessed to be in a family where I learnt to stand up for myself and that’s what each woman needs to be made aware of.”
— Neha Sachdeva, 28-year-old HR Consultant

No pain no gain is a saying I often use with my eight-year-old. Struggles have been at every step we have taken. Hailing from a conservative family, late hours of work was looked down upon. Funds were sanctioned by my father and that needed me to prove myself in a small way first. Competitors and slow growth due to lack of marketing expertise were our major challenges. Looking at the brighter side, our partnering with Metro Wholesale empowered us with more avenues and opportunities without having to deal with so many different companies individually, which helped us focus on our next step to success.
— Mahalakshmi Jayakumar, Masterchef’s Food Ventures

I don’t believe in keeping just one day aside for women. What about the rest of the days in a year? Every day should equally belong to all, men, women and children and everyone should enjoy equal rights. It’s time to stop calling it a man’s world. It is equally ours.”
— Neelamani N. Raju, Director General & Inspector General of Police

It is not easy for women to shine in politics as not all parties willingly give them seats. They get an opportunity only when a seat is reserved for them. But once they win, they must prove their abilities and not just be puppets in the hands of their husbands or fathers.
— G. Padmavathi, former Bengaluru Mayor

I would advise every woman out there to live life with confidence. She  should just be herself and stop expecting people to treat her in a certain way. As long as we are true to ourselves and stand our ground, we require nobody's  empathy. I  hope that every woman out there  believes in herself and reaches great heights.”
— Kalpana Kar, member of SWM Expert Committee, Government of Karnataka and co- founder, Bangalore Agenda Task Force (BATF)

■Guest column: Legal framework has ushered in many changes

Hold consultations with states on issue of identification of minorities: SC to Centre

Increase in death registration in 2020 not entirely due to Covid fatalities: VK Paul