Jawarharlal Nehru University Student Union president Kanhaiya Kumar addresses media at the university campus along with other student leaders in New Delhi after he was granted bail.

Hyderabad: Many sedition cases booked since Independence have failed to withstand judicial scrutiny, except in Kedar Nath v State of Bihar where the Supreme Court upheld the charge, with certain caveats in 1962.

In one of the earliest cases, the Punjab-Haryana High Court in Tara Singh Gopi Chand v the State on November 28, 1950, struck down Section 124A of the Indian Penal Code, which defines sedition, holding it to be unconstitutional as it was contrary to the freedom of speech and expression guaranteed under Article 19(1) (a).

Eight years later, in Ram Nandan v State of UP, the Allahabad HC held that Section 124A imposed restrictions on the freedom of speech which was not in the interest of the general public and declared it ultra vires.

Ram Nandan, who was fighting for the cause of farmers and agricultural labour in UP, was charged with sedition for an inflammatory speech on May 29, 1954, accusing the Congress rule of not being able to address extreme poverty in the state and exhorting cultivators to form an army and overthrow the government if needed.

Read: Sloganeering is not sedition

He accused the then PM Jawaharlal Nehru of being a traitor for dividing the country. These decisions were overruled in 1962 by the Supreme Court in Kedar Nath, stating that any law which is enacted in the interest of public order “may be saved from the voice of constitutional invalidity.” 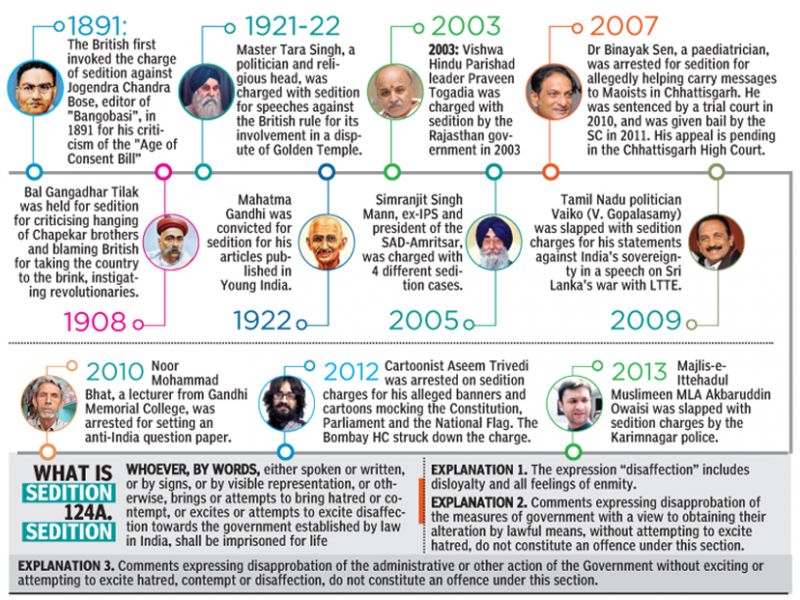 Case studies since independence on sedition

Kedar Nath was a member of Forward Communists Party of Bihar and was charged with sedition for accusing the Congress government of corruption, and targeting Vinobha Bhave’s attempts to redistribute land, at a speech in Barauni in 1953. A five-judge bench of the SC headed by Chief Justice B.P. Sinha upheld Section 124A, stating that it is intra vires.

Justice Sinha, however, laid down certain caveats. He observed, “Comments, however strongly worded, expressing disapprobation of the actions of the government, without exciting those feelings which generate the inclination to cause public disorder by acts of violence, would not be penal. In other words, disloyalty to the government established by law is not the same thing as commenting in strong terms upon the measures or acts of the government, or its agencies, so as to ameliorate the condition of the people...”

Read: No arrest so far in sedition cases in Telangana

In Balwant Singh and Another v State of Punjab in 1995, the SC held that the casual raising of slogans once or twice by two individuals alone cannot be aimed at exciting or attempting to excite hatred or disaffection towards the government as established by law in India. The duo had raised anti-India slogans on October 31, 1984, the day Indira Gandhi was assassinated.

In Indra Das v State of Assam as recently as 2011, the top court ruled that the provisions of Section 124A have to be “read in a manner so as to make them in conformity with the Fundamental Rights”.

The word sedition has  not been defined in the Constitution. Section 124A which is part of Chapter VI of the Indian Penal Code, deals with “offences” against the State.

Sedition was not a part of the original Indian Penal Code enacted in 1860 by the British government. It was introduced in 1870 to quell the freedom struggle and retain imperial power.

After sedition was introduced as a crime, British courts in India convicted Bal Gangadhar Tilak, Annie Besant, and Mahatma Gandhi.

Gandhi after his prosecution in 1922 for sedition, said, “Section 124 A is perhaps the prince among the political sections of Indian Penal Code designed to suppress the liberty of a citizen.”

Quarantine not against Islam or Shariyat: Tablighi Jamaat's Maulana Saad