According to experts, watching the sun directly at any time is bad for the naked eye because of the UV radiation. Hence a big 'No' to viewing the eclipse without precautions.

Hyderabad: Visakhapatnam is one of the best places on mainland India to observe Wednesday’s solar eclipse. While the eclipse will be total over the Pacific, it will be only partially visible over most parts of India.

It will not be visible in the west and northwestern parts of the country. In Hyderabad, the sun would rise at 6.29 am on March 9, allowing people to see only 12 per cent of the solar eclipse. 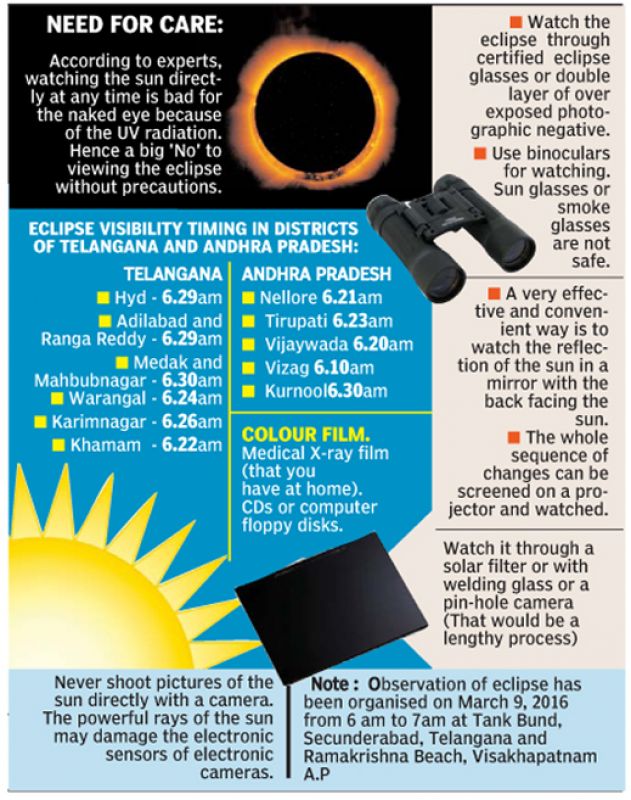 So what will Hyderabadis see?

Dr Raghunandan Kumar, director, Planetary Socie-ty of India, said, “When one looks at the eastern sky at 6.am on March 9, one will see the sun rising. The moon will rise at 6.30 am. At about 6.32, one will see the moon’s shadow slowly blocking the sun. At its maximum, 12 per cent of the sun will be blocked.”

Observers in Agartala, Tripura, would see 15.1 per cent of the sun obscured, in Guwahati 11, Kolkata 18.5, Bhubanes-war 24.5, Patna 12 and in Port Blair, 49 per cent of the sun will be behind the moon. If one misses this eclipse, the next one is more than three and a half years away.

Read: Watching the sun is not a heroic act, say experts

“On December 26, 2019, the solar eclipse can be viewed from all over Hyderabad. In fact, the occurance can be seen from all over the country. The obscuration during the event has to be calculated,” the director said.

A solar eclipse occurs when the moon passes between the sun and the Earth in such a way that the sun is wholly or partially obscured. This can only happen during a new moon when the sun and moon are in conjunction as seen from the Earth.

■Watching the sun is not a heroic act, say experts
■Astrologers see start of bad times

Despite vaccines, no Covid herd immunity in 2021: WHO