Visakhapatnam: Nations participating in the International City Parade marched together on RK Beach Road for peace and unity as part of International Fleet Review 2016 that has offered much spectacle for citizens in the past few days.

The parade, which sported an international look, presented a cross-section of Indian culture. Each participating navy displayed their country’s rich heritage and culture, holding up their national flag to applause from a huge crowd, which included many foreign nationals. The attire of the contingents of various navies was a wonderful sight to see as everybody came with a different theme. The Bangladesh navy was backed by some girls wearing their traditional sari while the Sri Lankan navy was followed by a group performing their folk dance.

How the parade proceeded 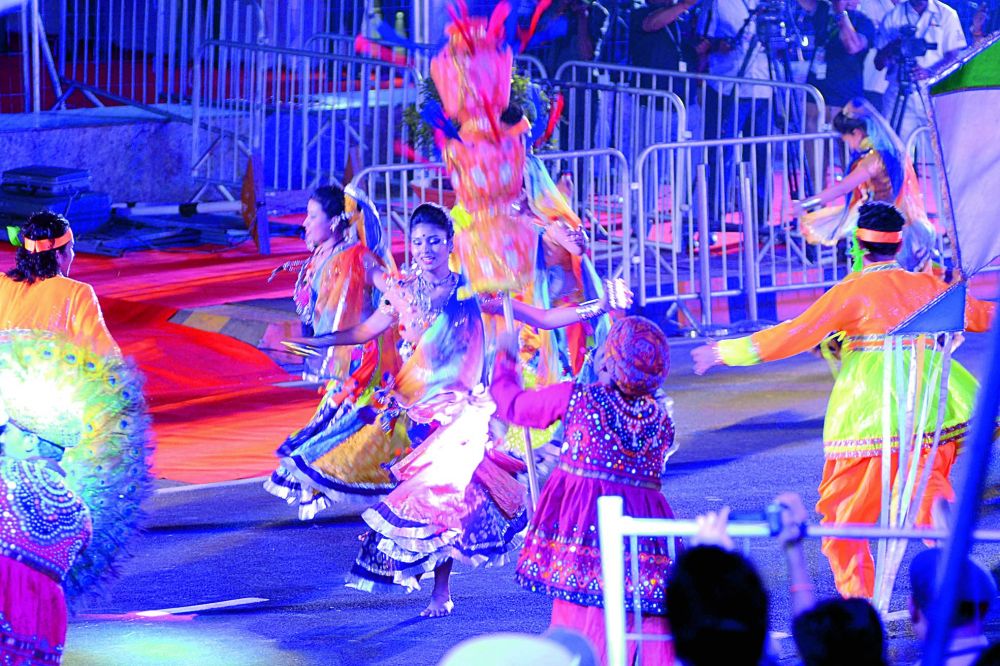 The parade started off with a dance performance by the children of local schools. The dance was themed on yoga and the ‘Make In India’ concept. Another dance brought out the traditional dance forms of almost all the states.

The International City Parade was a proud moment for women as it was led by a lady naval officer. A contingent, holding the flags of all the countries, followed the lady officer, creating a sense of unity among all.

The Indian Navy, Army, Air Force, State Police, NCC, Sainik School, SCC Scouts all passed one after another, saluting Prime Minister Narendra Modi, who seemed to be enjoying the parade from beginning to end.

Several veteran navy personnel also participated in the event, showcasing their unmitigated patriotism towards the country. A 94-year-old retired naval officer was seen leading the contingent, receiving continuous applause from the audience.

Tableaux on ‘Make in India’ and Smart City rolled down

The tableau, based on the ‘Make in India’ theme, presented on a big vehicle, covered with a replica of a roaring lion, was the major attraction. It showed how India was being self-reliant in manufacturing defense equipment. ISRO also carried out a tableau displaying its achievements in space technology and research.

GVMC’s tableau showed what its agenda was to make the city smart. Two boys were shown cycling to promote a healthy lifestyle and making the city pollution-free. 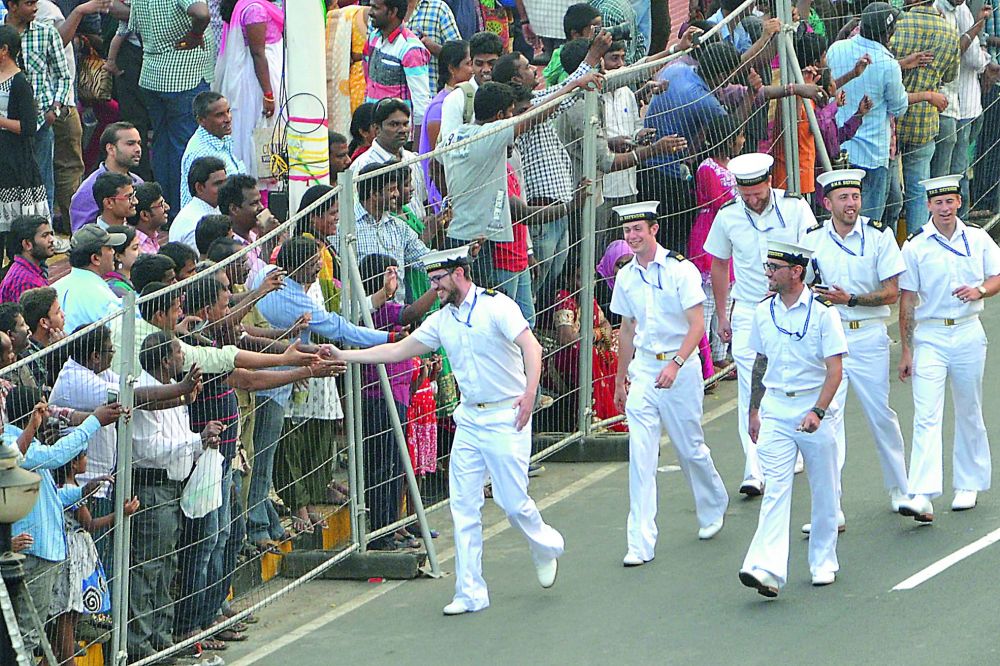 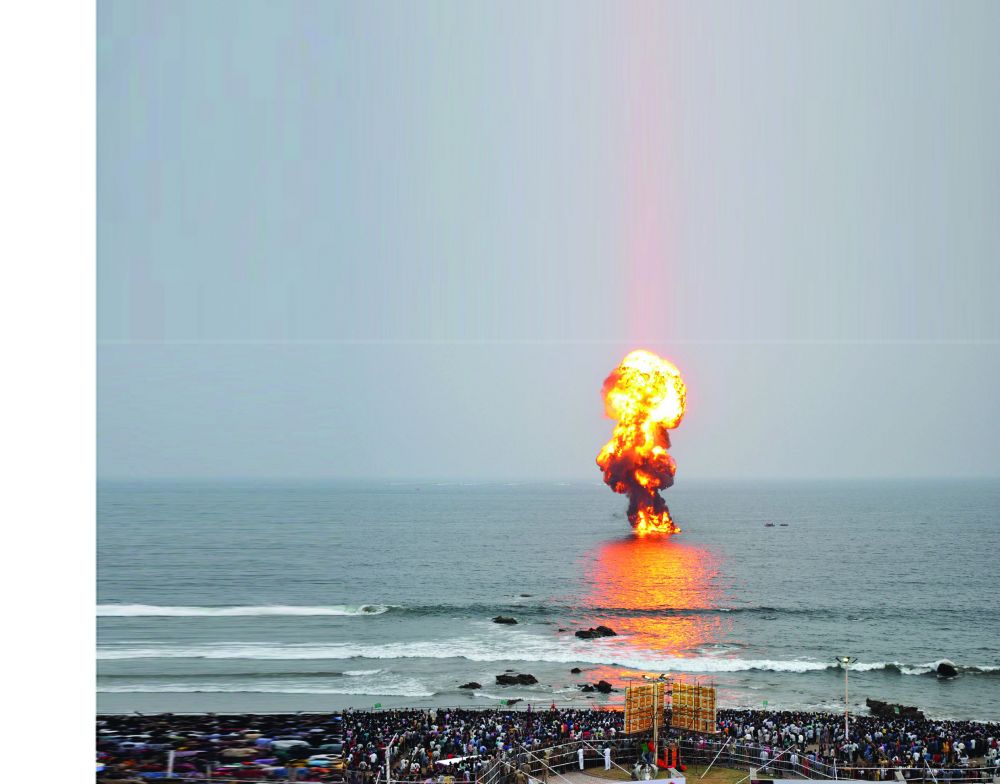 A made-up oil rig turns into flames after it was set fire by navy personnel during the Operations Demonstration.

The Rama Krishna Beach in Vizag reflected a war-zone as well as a major tourist spot, with lakhs of people lining up the beach to watch exhilarating 30 minute operational-demonstration of the naval personnel during the IFR on Sunday.

The Indian Navy displayed its maritime, air and onshore capabilities during the op-demo. On display were, Indian Navy’s Chetak Helicopters formation flypast, fighter aircrafts appearing from nowhere and gaining height in no time, a dummy target beting hit, marine commandos coming in Gemini boats and mock attack on the on reaching the shore were kept the spectators spellbound.

Marine commandos coming down by parachutes and another team of marine commandos joining in the sea after they were airlifted by a naval helicopter, rocket firing by MiG29K and Hawk and few others  made a perfect visual feast to the public.

Modi has a pat for city

Prime Minster Narendra Modi, who was in Visakhapatnam to participate in the Inter-national Fleet Review, was all praise for the City of Destiny and its people.

Addressing a huge gathering at RK beach area on Sunday, Mr Modi said that he was privileged to visit Visakhapatnam, which has a special place in the hearts of all Indians.

“My last visit to Vishakhapatnam was in October of 2014 when Cyclone Hudhud had left the city shattered. But, the people of Vishakhapatnam smiled in the face of adversity,” the Prime Minister said.

“It is a tribute to the city that within 14 months, it has risen against all odds to welcome navies from across the continents in this International Fleet Review,” the Prime Minister said.

“A little over a year ago, we saw the full fury of the ocean. Today, thanks to the spirit of the people of Visakhapatnam, we are discussing how the oceans can be a source of economic prosperity for all of us,” Mr Modi said in remarks that was widely appreciated.

Two dead after members of rival groups clash in Telangana

Supreme Court says firecracker ban not against any community

PM Modi to address nation at 10 am today