DECCAN CHRONICLE. | SHILPA P
Published Dec 7, 2016, 2:44 am IST
Updated Dec 7, 2016, 3:34 am IST
A few old timers and neighbours in Lakshmipuram, recalled their acquaintance with the family and mourned her death.

Lakshmipuram Sports club and a bungalow which have come up in place of Jayalalithaa's residence on second cross, second main road at Lakshmipuram in Mysuru. The place is being sold off and the original building is being demolished.

Mysuru: Lalitha Vilas, the house in which the late Tamil Nadu Chief Minister,  J. Jayalalitha spent her formative years from 1948 to 1951, on second cross, second main, Lakshmipuram here, has given way to the Lakshmipuram sports club.

The original bungalow on a 180 X 200 feet site was demolished and rebuilt after it was sold. Jaya Vilas,  another house in Saraswathipuram, which is said to  have belonged to her family, has also been demolished. 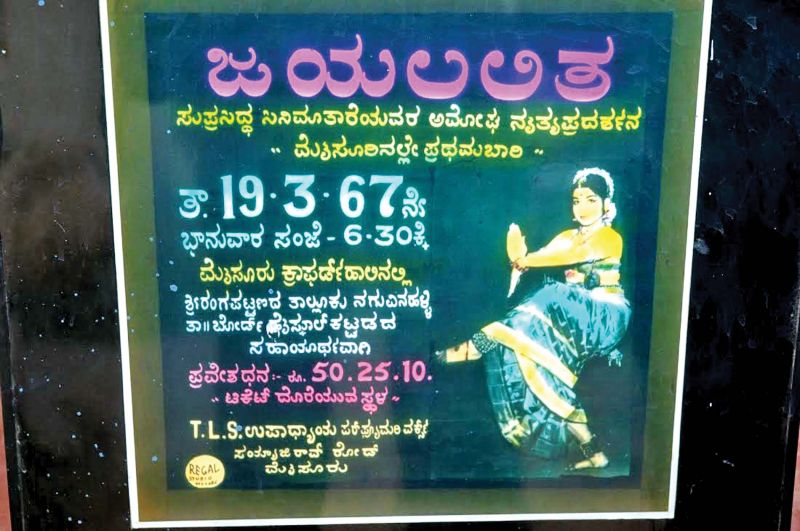 Children of high school at Naguvinahalli in Mandya district mourned J. Jayalalithaa's death as she had performed at Crafford hall in Mysuru to raise funds for the construction of the school building on March 19, 1967.

A few old timers and neighbours in Lakshmipuram, recalled their acquaintance with the family and mourned her death. “I remember seeing her as a small child, when I went with my mother to her house for Gokulashtami Pooja. Her mother, Vedavalli, who was part of the Mahila Samaja in Lakshmipuram,  accompanied my aunt Ramlakshmi  to Veena classes,” said Nalini Srikant M.N., a neighbour.
“Her mother  came to play badminton at the Mahila Samaja, according to my mother Savithri,” said another neighbour,  Lakshminarayan

Stepbrother mourns too
“My  hope of meeting her, if not for financial help,  at least for our relationship's sake, has gone. She should have lived. She would have contributed more to the people of Tamil Nadu,” mourned 80- year- old N J Vasudevan , who lives in a humble house in the remote Srirangarapuram village in T Narsipura taluk.
He claims to be Ms Jayalalithaa's stepbrother and the son of Jayamma, her father's first wife.

“The most painful thing is she is not surrounded by any of her relatives. Only  four of her core relatives are still alive,  including myself. While Ms Jayalalitha's brother Rajagopal is no more, his wife, Vijayalakshmi and their daughter Deepa are still around. Ms Jayalalithaa's mother, Vedamma was said to have been pregnant with a third child when my father passed away, and reportedly gave the child,  Shylaja to someone to bring  up secretly.  While Shylaja is also no more, her daughter, Amritha lives in Ramasandra in Bengaluru,” Mr Vasudevan said.
Recalling the family's roots in Karnataka, he added,   “My grandfather, Dr Rangachar is said to have moved from Nanjarajapuram near Sriranga in Tiruchy, Tamil Nadu to Mysuru.”

Born in Karnataka
Ms Jayalalitha was born in a Brahmin, Iyengar family to  Jayaram and  Vedavalli on  February 24, 1948. While its claimed she was  born in the Cheluvamba Children's hospital in Mysuru, there are no hospital records to prove this, according to hospital Superintendent, Dr Radhamani. But head of the department of Ancient History and Archaeology, KSOU, Dr Shalva Pille Iyengar believes she was born in Melkote while her mother was visiting  a relative there.

“After her father, Jayaram passed away in November 1951, her mother left her children, Rajgopal and Jayalalithaa with her parents in Bengaluru and left for Chennai, where her sister, Ambujavalli (Vidhya) lived.  Vedamma changed her name to Sandhya and became an actress. And Jayalalitha who studied till class V in the Bishop Cotton School in Bengaluru, also moved to Chennai, where she learnt Bharatnatyam. And  when she was 13 she also began to act in movies,” said Mr N.J. Vasudevan.

TTD gears up for Salakatla Brahmotsavams