CHENNAI: One of the outstanding woman educationists of South India, Dr Rajalakshmi Parthasarathy, widely known as Mrs YGP, passed away here on Tuesday afternoon after a brief illness, her family sources said.

Mrs YGP, who went on to head the PSBB Group of Schools in Chennai, was 93. She is survived by her two sons, famous stage and film actor Y.Gee. Mahendra and Y.Gee. Rajendra, besides daughters-in-law and several grandchildren.

Shortly after Mrs YGP breathed her last, her body was kept for public homage at PSBB’s T.P. Road school branch where a large number of her students, teachers, parents of wards and people from various walks of life paid their last respects to the legendary teacher, who came to symbolise an innovation in school education.

The cremation will take place at Besant Nagar crematorium on Wednesday.

Born on November 8, 1925, in old Madras, in the family of Diwan Bahadur T. Rangachari, a “formidable name in South Indian circles” in the 1920s’ as her biographer Ms Lakshmi Devnath recalls, the young girl Rajamma, grew up and was schooled at different places as her father's job kept shifting.

She was the first girl in her family to enter the portals of Higher Education — Holy Cross College in Tiruchy as she had spent a considerable part of her early days there.

She was drawn to the Freedom Movement led by Mahatma Gandhi even at an early age and had contemplated joining his Ashram in Sabarmati.

But Rajalakshmi's destiny in life was to be different, to train and groom generations of students in a model of education that combined traditional values, a modern, secular outlook, thirst for knowledge, and above all being useful to society.

A 'growing friendship' with YG Parthasarathy, (the YGs were Mandayam Iyengars with roots in Mandya district in Karnataka), it "blossomed into a marriage", though not without her fair share of anxieties. The UAA theatre group, which YGP had formed, with the prodding coming from Mrs. YGP, turned out to be the training ground for many budding and later famous film artistes. 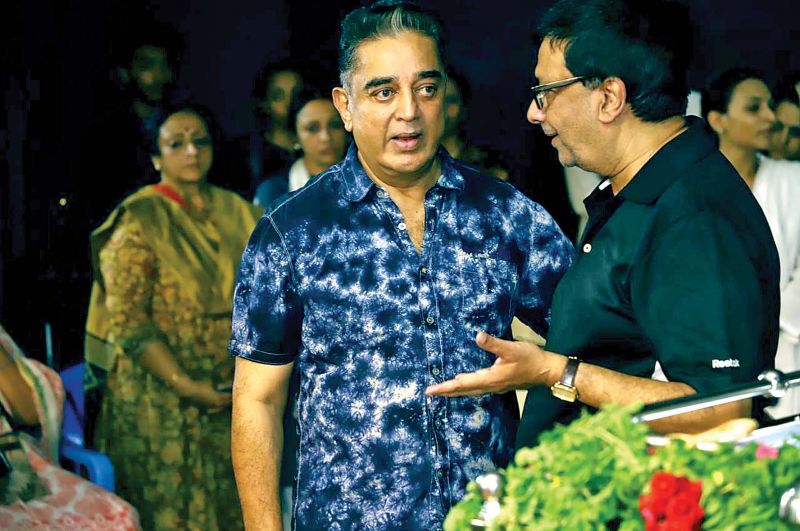 In fact, former Chief Minister, Ms J Jayalalithaa's acting talents was first spotted by Mrs YGP, who encouraged her much during the former's high school days. And many a leading artiste, including Mouli, Visu and Cho Ramaswamy had been associated with UAA. Now, Y Gee Mahendra carries forward the YAA beacon.

However, Mrs. YGP's most enduring contribution was in the field of school education. Having founded the 'Bala Bhavan' school under the auspices of the Nungambakkam Ladies Recreation Club, in the late 1950s' under a thatched roof in Nungambakkam, Mrs. YGP strained every nerve to build in into a unique institution.

Thanks to her pedagogic brilliance, commitment, hard work, and munificence of many donors and well wishers, 'Bala Bhavan' over the years evolved into the 'PSBB Group of Schools', as her biographer recalls. It was not an elitist school, but an institution that stressed on quality education even while being 'affordable' to an emerging middle class in post-Independent India.

From Rajaji, Indira Gandhi (Rajamma had interviewed her once during her stint as a Journalist), M Karunanidhi, VR Nedunchezhiyan, MGR, Jayalalithaa to Dr APJ Abdul Kalam - Mrs YGP had interacted with a wide range of political and social leaders. The PSBB itself has produced a range of eminent students including Mozart of Madras, AR Rahman.

As a teacher, she was extremely passionate in teaching Shakespeare's plays to her students and would even enact scenes from it in the classroom. Mrs. YGP in her later years took a doctorate in Vaishnavism. Even as she in her school curriculum emphasised on extra-curricular activities for the all-round development of the personality, she would always tell her innumerable students not to miss out on the moral compass. She was such a firm, yet compassionate teacher to many.

She was rooted in both arts and education

Mrs. YGP - that is how everyone knew her - was the gentle matriarch of a family that was rooted in arts and education. While her late husband Y.G. Parthasarathy ruled the stage with his Tamil plays, Mrs. YGP was the educator of Chennai's children through her Padma Seshadri group of schools. They are spread all over the world, in prime positions in various fields.

Mrs YGP made sure that the innate talents of the children in her schools were given full expression by encouraging extra-curricular activities. Three well known music composers - A.R. Rahman, G.V. Prakash and Anirudh are products of her school while numerous singers like Harish Raghavendar, Harini and Saindhavi are living examples of how talent was nurtured at the PSBBs. The schools are managed by her second daughter-in-law Sheela Rajendran.

Mrs. YGP continued to be a tireless patron of arts and culture through her cultural outfit Bharat Kalachar which has remained a prestigious sabha for staging concerts, dance programmes and plays. Though her given name was Rajalakshmi, those in Tamil theatre and cinema called her Rashmi. But it was as Mrs. YGP she commanded awe and admiration as she created multiple generations of brilliant students graduating into their choice areas of excellence. 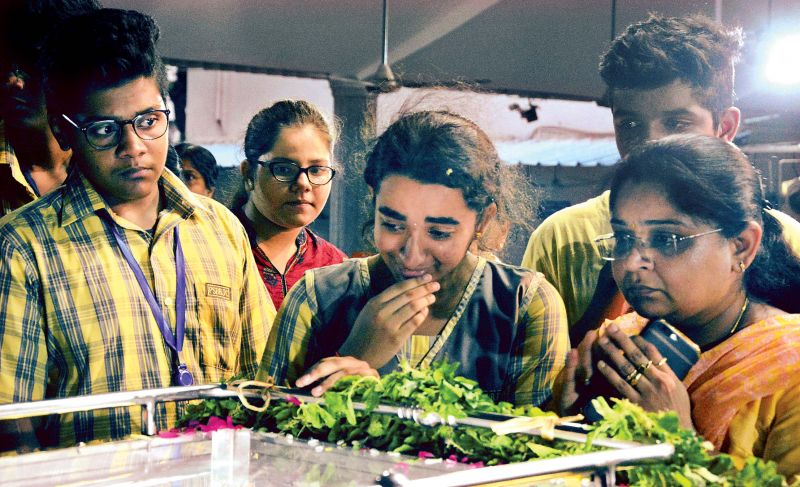 Grieving students have their last worshipping glimpse of the great guru. (Photo: DC)

One of those many is Vice Chancellor Dr Vaidya Subramanian of the reputed Sastra University at Thanjavur. Packing his bags to rush to catch a glimpse of his teacher before she's laid to rest, teary-eyed Vaidee (as he's known to his classmates of yore) has come out with an announcement of Dr (Mrs) YGP Chair at the University "for Teacher Education & Research as a tribute to this outstanding educationist, nationalist, spiritual and more importantly a role model teacher".

"I am honoured to be her student and with tears recall my long association with her as I seek her eternal blessings. Shree Gurubhyo Namaha, on my way to see you for the last time after which your unseen presence will bless PSBB and it's extended family", said the Sastra chief of his revered guru.

Her son YG Mahendra and his daughter Madhuvanthi continue to uphold the YGP tradition of staging Tamil plays under their respective banners. 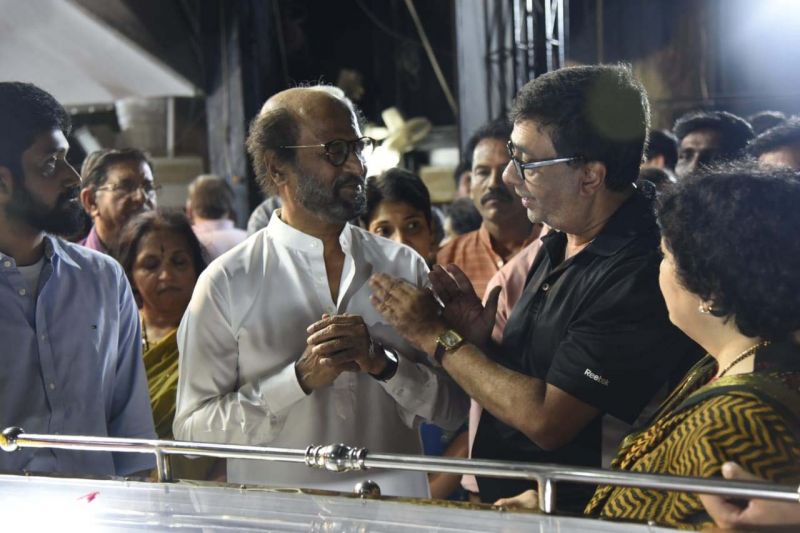 The YGPs are also intertwined with other big names in Tamil cinema and culture. Mahendra's wife Sudha is the sister of Latha Rajinikath and Ravichander, the father of music director Anirudh.

In spite of her age and being confined to a wheelchair, Mrs. YGP would be present for all the major events at Bharat Kalachar and would readily give her comments. She only had encouraging words for the performers.

Her demise has robbed the city's education and cultural scenes of a genial giant.