BSIM was founded in the June 2013 by Adhunika Prakash (who is now a certified Lactation Educator and Counsellor) with the intention of empowering women with information.

Breastfeeding Support for Indian Moms (BSIM), a social media group opened by breastfeeding mothers, has now grown into a huge movement in the city. They try to help new mothers understand facts about breastfeeding and bust many myths surrounding it.

Encouraged by good response and numerous queries by new mothers, the administrators of the social media group soon took up the role of an NGO to widen their reach and organize activities like awareness camps to help new mothers.

With a modest start of just ten members, it has now grown to 50,000 new mothers. BSIM was founded in the June 2013 by Adhunika Prakash (who is now a certified Lactation Educator and Counsellor) with the intention of empowering women with information. 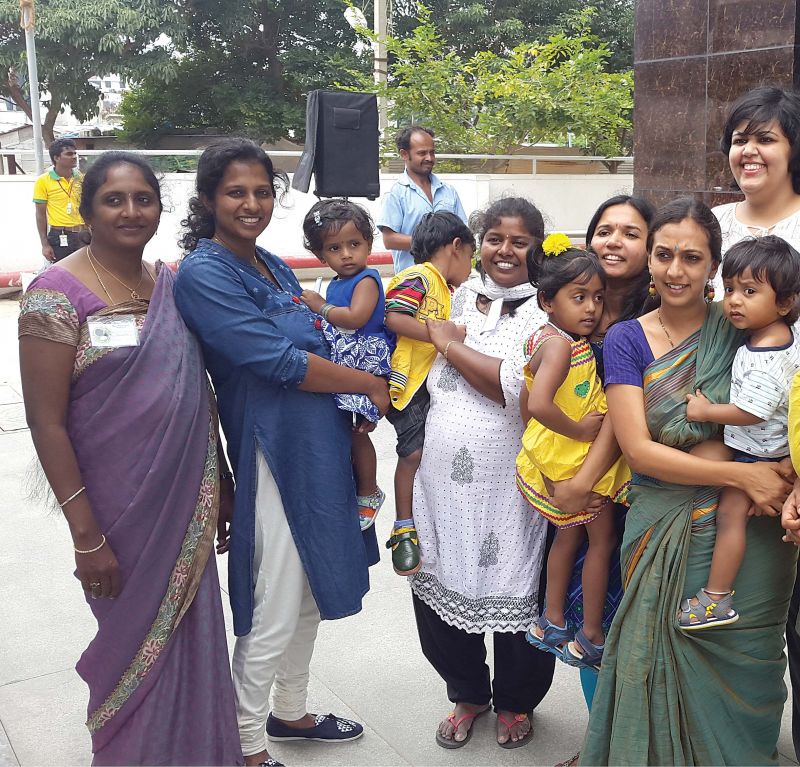 Initially, it was a Pune-based group, but as the number of members from across the country increased, the group witnessed an immense support from the city.

The Bengaluru chapter of BSIM has now crossed over 7000 volunteers and the activities are now being coordinated by Charulatha Varadarajan.

On the second Saturday of every month across various areas of Bengaluru she holds various activities along with other organisers like Dhanya M.A., Sapna  Krishnan and Meena Gupta.

“Earlier, it was just peer-to-peer counselling and responding to messages from new mothers. But now because of the huge response we conduct awareness walks, meet-ups, camps and fun activities as we have realised that there are no many parents who are unaware about breastfeeding and give in to many myths,” said Charulatha, who is the city admin of BSMMI (Breastfeeding Support For Moms of Multiples India)  and Bengaluru BSIM organiser.

Her personal journey and struggle with breastfeeding got Charulatha to connect with the group and since then she has been working with them. “As a mom of 31 week preterm twins who were in NICU for 1.5 months, lack of information and myths in society made my initial parenting years tougher. I exclusively pumped and breastfed my twins and continued to pump for 21 months. It requires a village to raise a child, but I would say that BSIM is good enough to raise a child during the first few years,” she stressed and added that such a group helps in huge ways.

The team includes lactation consultants, breastfeeding counselors, and experienced mothers. "The team consists of admins, moderators, and peer counselors. They are spread across the globe and across different time zones, this helps us in providing support 24 x 7. They understand our goals clearly - to help to breastfeed parents reach their breastfeeding goals, whatever they may be – regardless of their parenting ideologies and beliefs,” said Charulatha.

“Our mission not just to support mothers, but the entire family. The group is a mixed gender group and includes fathers, grandparents, and anyone with a deep interest in breastfeeding,” she explained.

The group’s ethos reiterates that breastfeeding is not about being a better or superior parent, but about aiming to give the baby the best possible nourishment. There is a wide belief that “lactavists” are anti-formula but that is untrue.

“We aren't anti-formula; we are against the marketing strategies implemented by formula manufacturers that make breastfeeding parents question their milk supply,” she said. The group's biggest concern regarding breastfeeding is the artificial baby milk.

The group has also become a registered charitable trust with a bank account where supporters of the cause can donate money. The money raised will be used to organise more educational campaigns and support activities on the ground. They hope to streamline their offline initiatives so that members who are looking for in-person support can benefit from it.