DECCAN CHRONICLE.
Published Aug 7, 2016, 11:52 am IST
Updated Aug 7, 2016, 1:58 pm IST
Modi has asked road transport ministry to seek details about the possibility of having such elevated buses on Indian roads.

A model of the street-straddling bus called Transit Elevated Bus after a test run in Hebei Province in China. (Photo: AP)

According to a report, Modi has shown interest in adopting China's ‘Transit Elevated Bus’ system that was inaugurated on August 3 in the north-eastern city of Qinhuangdao in Hebei province.

The 22-metre long Transit Elevated Bus runs on electricity and is more like a light-rail train that has the capacity to extend across two lanes. It can accommodate around 300-1200 commuters at a time.

Modi has asked road transport ministry to seek details about the new bus and explore the possibility and feasibility of having them on Indian roads.

He reportedly discussed the matter when a presentation was made on ways to improve traffic congestion in India, during a meeting with several officials from various ministries this week. 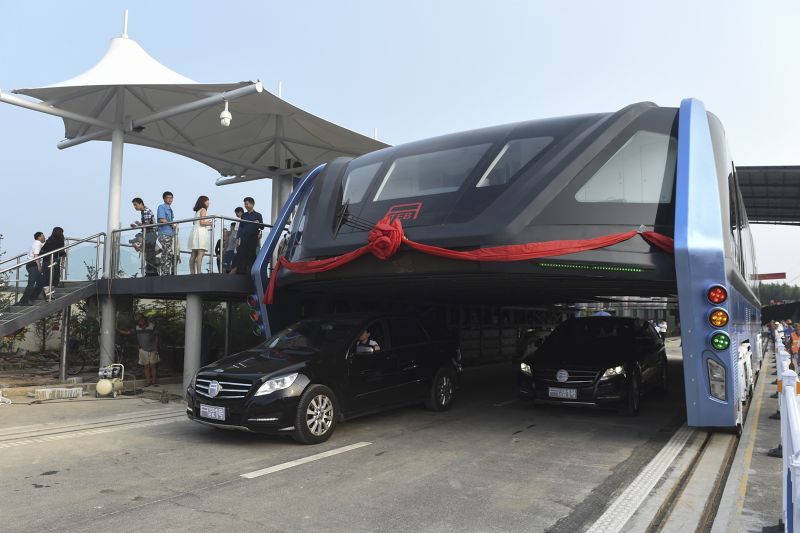 The futuristic bus can easily glide over traffic jams and pile-ups, as was seen during its demo run, which was conducted on a special test track of 300 metres. Most importantly, it has the benefit of being a pollution-free vehicle.

Capable of reaching top speeds of up to 60 km/hr, it runs on rails laid on the sides of ordinary roads. It was also reported that up to four of these buses can be linked together, which takes the total count of people it can carry to approximately 1,200.

This will come as a big boost to the country as one Transit Elevated Bus can replace a staggering 40 ordinary buses but there is no confirmation regarding the time when it will be deployed for public use.

Heatwave may subside over Delhi, Northwest India from today