Nagpur: Former president Pranab Mukherjee, who was invited as the chief guest at a function of the Rashtriya Swayamsewak Sangh (RSS), addressed the valedictory function of Sangh Shiksha Varg today.

The RSS event has generated a lot of interest and controversy ever since Pranab Mukherjee accepted the invite to address the RSS trainees with the Congress leaders urging him not to attend the event in the "interest of secularism".

Here are the updates of Pranab Mukherjee's address at the RSS event:

08:37 pm: "It was this very nationalism that Pandit Nehru so vividly expressed in the book 'Discovery of India', he wrote, I am convinced that nationalism can only come out of the ideological fusion of Hindu, Muslims, Sikhs and other groups in India," Pranab Mukherjee said.

08:36 pm: “Every day we see increased violence around us. This violence is a form of darkness. Our motherland is asking for peace, harmony, happiness,” Pranab Mukherjee added.

08:29 pm: "For us, democracy is not a gift but a sacred trust," Pranab Mukherjee said in his address to RSS workers.

He also called the Indian Constitution a Magna Carta for social economic transformation of the country. "We do not identify any enemy. That makes Bharat a democratic and united nation," Mukherjee added.

08:20 pm: "Our national identity has emerged after a long drawn process of confluence and assimilation, the multiple cultures and faiths make us special and tolerant," Pranab Mukherjee added.

08:17 pm: Pranab Mukherjee said, "Any attempt at defining our nationhood in terms of dogma and identities or religion, region, hatred and intolerance will only lead to dilution of our identity."

08:12 pm: The former president also said, "Our national identity has emerged after a long drawn process of confluence and assimilation, the multiple cultures and faiths make us special and tolerant."

08:10 pm: "I am here amongst you to share my understanding with you of the concepts of nation, nationalism and patriotism in the context of India," Pranab Mukherjee at RSS event.

08:00 pm: RSS chief Mohan Bhagwat further said, "Only when society at large participates in nation building, only then can governments deliver."

Even before independence, everybody agreed that we need to work together for the nation but political differences are now dividing us," Bhagwat added.

07:50 pm: “Governments can do a lot but not everything. Everyone has to be selfless and bias has to be given up when we can sacrifice everything for the country. When everyone comes together, then everyone becomes a part of nurturing the interests of the country," Mohan Bhagwat said.

07:48 pm: "Despite all our differences we are sons of mother India," Mohan Bhagwat further said adding "RSS does not discriminate between Indian citizens. No Indian citizen is an alien for us. RSS believes in unity in diversity. Every citizen born in India is an Indian. It is his/her right to worship our motherland." 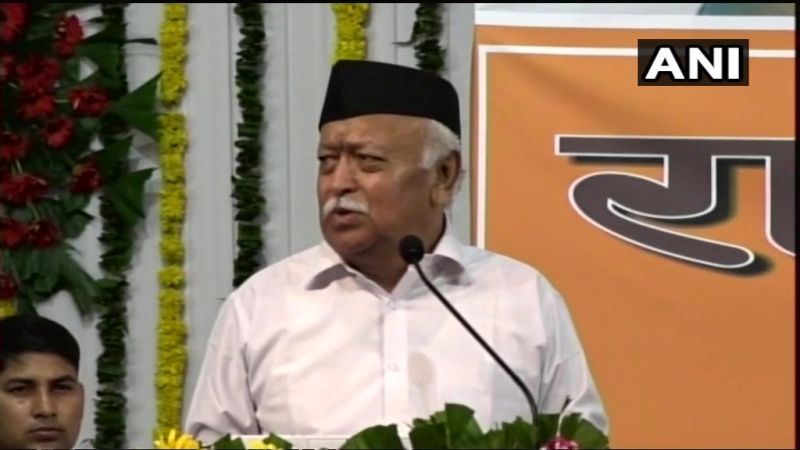 07:41 pm: Mohan Bhagwat thanks Pranab Mukherjee for taking time to understand the organisation. He also said, “This is an annual event. The debate on why he accepted the invite to come here is meaningless” 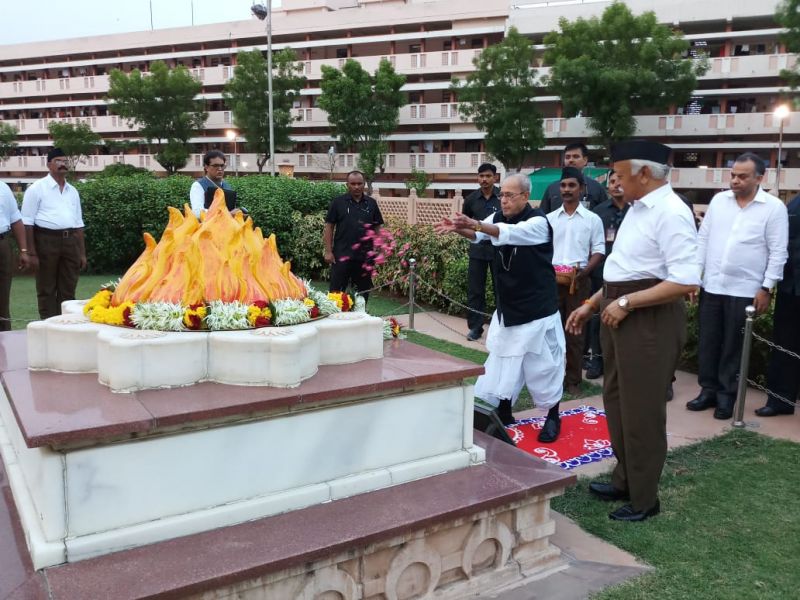 07:08 pm: Meanwhile, the RSS said that India has an old tradition of exchanging views and ideas. In a tweet, RSS said, “Continuous communication is India’s way of living. RSS and Pranab Mukherjee are aware of each other’s views, yet the sangh forwarded the invitation and Pranab Mukherjee accepted it. This is Indian tradition.”

07:05 pm: Reacting to Pranab Mukherjee hailing K B Hedgewar as 'great son of Mother India', Congress leader Hussain Dalwai says, "I had a lot of respect for him but perhaps because of his age he thought he should do something wrong before making an exit. (Unke prati bada aadar tha, shayad umar ki wajah se jaate jaate kuch galat baat kardun aisa laga hoga unko)," news agency ANI reported.

07:00 pm: As the RSS event is underway, Congress continues its tirade against the outfit:

It is imperative for all Indians to know what the RSS has historically stood for and to understand what it thinks today. People of India should never forget how antithetical their ideologies are to the idea of India.https://t.co/j3DoUsaftu

06:50 pm: Earlier, Pranab Mukherjee offered homage at the samadhi of Hedgewar along with Mohan Bhagwat. 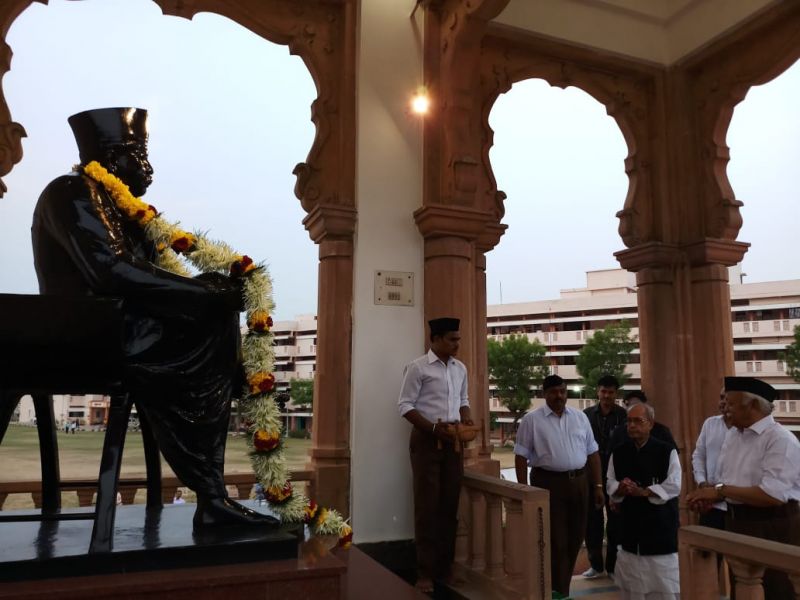 06:41 pm: RSS cadres holds march past at the event in Nagpur. 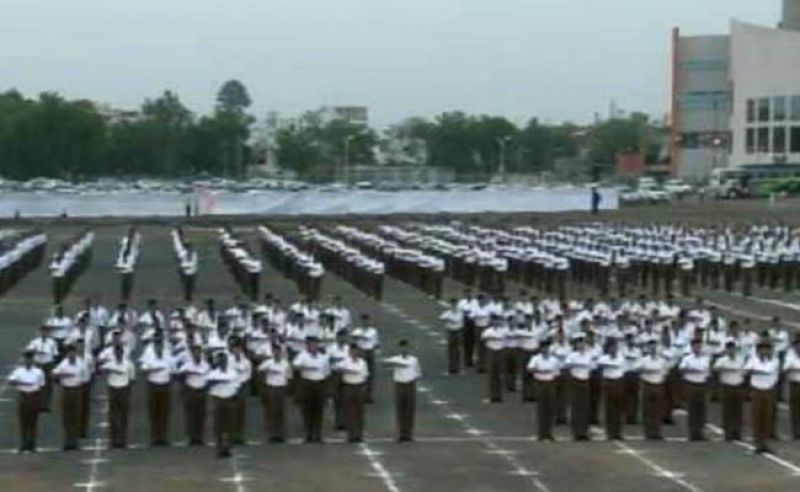 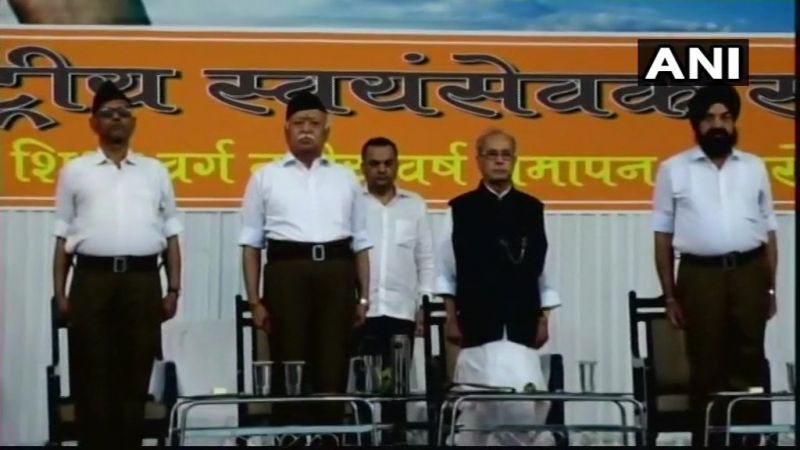 Dialogue can only be with those who are willing to listen, absorb and change. There is nothing to suggest that RSS has moved away from his core agenda as it seeks legitimacy.

The images of Pranab Da, veteran leader and ideologue at RSS Headquarters have anguished millions of Congress workers and all those who believed in pluralism, diversity and the foundational values of the Indian Republic.

06:10 pm: Taking a jibe at the RSS ideology, Congress tweeted:

Today is a very fitting day to bring you all a primer on what the RSS really stands for. pic.twitter.com/m1oQ15nkDJ

05:30 pm: Today I came here to pay my respect and homage to a great son of Mother India: Former President Dr Pranab Mukherjee wrote in the visitor's book at RSS founder K B Hedgewar's birthplace. 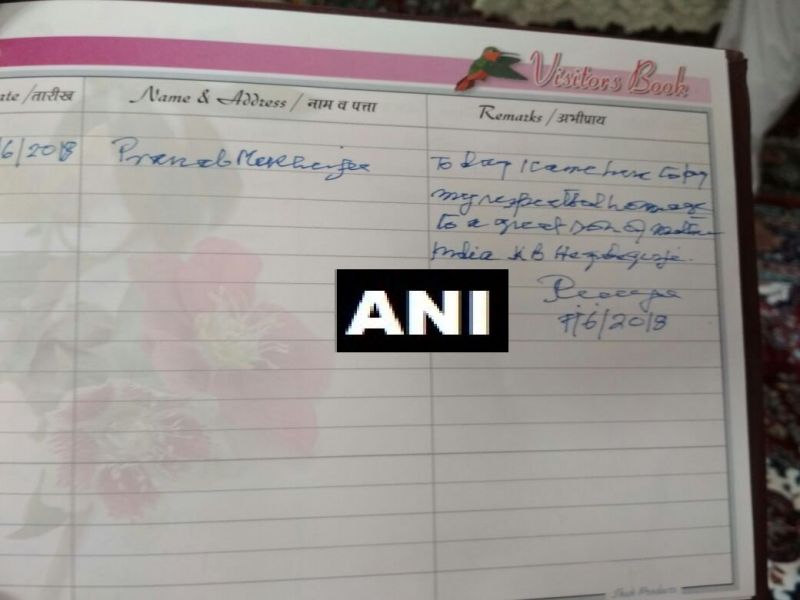 On Wednesday, Pranab Mukherjee's daughter and Congress leader Sharmistha Mukherjee disagreed with her father's decision of accepting the RSS invite. She also rubbished the rumours that she could switch to BJP.

Read: Pranab Mukherjee's daughter says his RSS speech will be lost, not visuals

Amid heavy criticism over his decision to accept RSS invite with the Congress leaders requesting him to reconsider the decision, the former president had said, "Whatever I have to say, I will say in Nagpur."

Meanwhile, Union minister and senior BJP leader Nitin Gadkari on Tuesday welcomed former President Pranab Mukherjee's decision to accept an invitation to attend an RSS event, saying it is a "good start" and "political untouchability" is not good.

On May 28, a top RSS official has confirmed that former President Pranab Mukherjee will address 600 workers at the organisation's headquarters in Nagpur on June 7.

The address is planned for the Third Year Sangha Shiksha Varga (SSV) which began on May 13 and is being attended by over 600 participants from all over the country.

RSS leader Rakesh Sinha said that Mukherjee's acceptance to attend the event reflects that there can be dialogue on vital issues and adversaries are not necessarily enemies.

"Questions raised on RSS-Hindutva are being answered by his acceptance of invitation," Sinha added.

Mukherjee (82) demitted office of president in July 2017. Prior to that, he worked closely as a Congressman with both former Prime Ministers Indira and Rajiv Gandhi and served as finance minister in the UPA II government led by ex-prime minister Manmohan Singh.

PM Modi bats for a tech-free room in every house

No to NPR, agrees for census: Kerala govt