n Experts say the Tiruvalla, Thrissur and Thodupuzha incidents reflect the growing violence against women and children. They say while stalking by itself is not an offence, it becomes an offence when it is done with a clear purpose of crime.

Thiruvananthapuram: A 22-yearold engineering student was burnt to death in Thrissur two days ago by a jilted lover. Less than a month ago there was the shocking incident of a Tiruvala girl succumbing to burns after a stalker set her on fire by dousing her in petrol.

Apart from the shock and disbelief, the gruesome murders have brought into focus the absence of a system to deal with brutal violence resorted to by jilted lovers. The incidents of stalking-related murders and violence are not uncommon in the state.

Experts say though there are several provisions in existing law to tackle stalking, in most cases the girl or parents are reluctant to approach police owing to social stigma, fear of reprisal from the accused and in some cases lack of trust in the law-enforcing agency.

“We have the support mechanism in place. For instance Snehitha of Kudumbasree, help desk of various organisations and counselling facilities are available. But these cases are related to love affair. In both instances, the victims were accused of ditching their boyfriends. During a recent interaction programme in Pathanamthitta with youths, a section of boys said such incidents take place because of the betrayal by girls. This reflects their mindset,” said Rejitha of Sakhi, an NGO working for women rights.

Experts say after a particular period when girls come to know about the real character of the boy, they decide to end the relationship. But such decisions are often met with brutal violence. The boys feel that their dominance and masculinity have been challenged.

The girls are afraid to seek outside help including that of police for the fear of more violence from their partners. “It is a complicated issue related to attitude. There is just one way out. The men in Kerala need to change, they need to change their attitude,” said Ms Rejitha.

Many say the local bodies can play an important role in checking such incidents with the help of local people. Jagrata samitis formed in panchayts need to be revived. Besides, the vigilance groups set up by Kudumbasree can also play major role.

So what is the psychology of such criminals? “Such persons suffer from antisocial personality disorder,” says Dr R Jayaprakash, additional professor and child psychiatrist, SAT Hospital.

“Many people ask how girls get attracted to these persons. People with antisocial personality disorder have a special ability to attract others with their speaking abilities and they enter into a relationship very fast. But at the same time they can shock with their impulsive and criminal behaviour. They have a destructive criminal behaviour trait,” Dr Jayaprksh added. 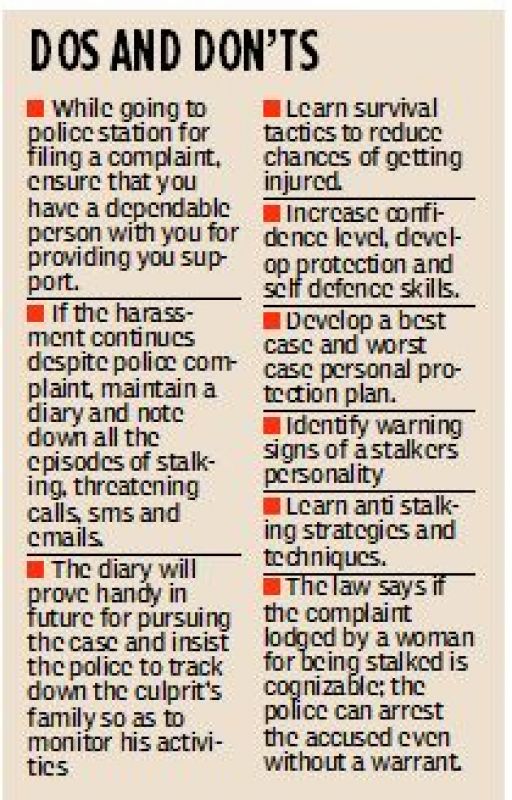 According to him the accused involved in the murder of the seven-year-old boy in Thodupuzha also suffers from a similar criminal trait. There is a need to analyse the behaviour of the three persons. While many people are aware of schizophrenia and depression being mental disorders, there is not much awareness about personality disorder.  The family and background analysis of people with criminal personality disorder needs to be evaluated in detail.

Experts say the Tiruvalla, Thrissur and Thodupuzha incidents reflect the growing violence against women and children. They say while stalking by itself is not an offence, it becomes an offence when it is done with a clear purpose of crime.  Though there are provisions under sections 354, 509 and 504 of the IPC which clearly specify the offence, in most cases the girl or her parents are reluctant to file complaint because of fear.

While stalking is widespread across the state, there are not many reliable counselling centres forgirls to open up on such issues and seek help. The stalkers usually suffer from obsessive compulsive disorder and they can’t accept rejection.

The police officers dealing with such cases need to be more compassionate. Since stalkers can act like psychopaths, the complaints should be dealt with on priority.  Experts say it is time authorities took note of the life-threatening crime and put in place an effective monitoring mechanism along with strong deterrent measures.

The girls are afraid to seek outside help including that of police for the fear of more violence from their partners. ‘It’s complicated issue  related to attitude ‘